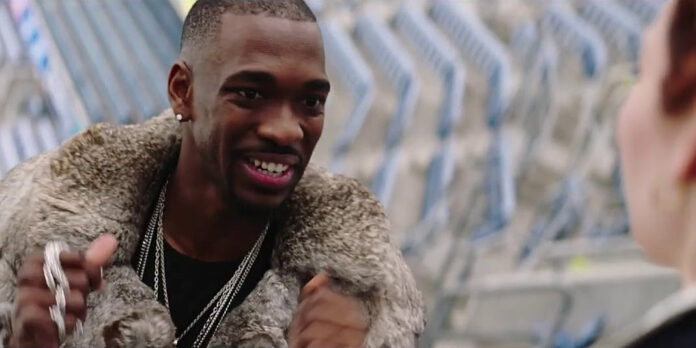 THE STORY – When an outbreak of peace threatens rock star Harry Hope’s charity concert, he dispatches his PR consultant to create a fake war story – until the concert, at least.

​We live in a crazy world. There’s no denying that. It’s a world ripe for the satirical plucking, so it’s no surprise that writers everywhere are chomping at the bit to do so. Satire is at its best when it is at its most focused, when it peels back the layers of one thing as if it were an onion, to eventually lay the truth at the center of the thing bare. When a piece tries to satirize more than one thing – or, heaven help us, everything – the focus ends up spreading too wide to cut as deep as good satire should. This is the problem with “How to Fake a War.”

Rock star Harry Hope (Jay Pharoah as a Kanye West-type figure) wants to do good for the world. He’s obsessed with bringing about world peace so much that he will do almost anything. His PR person, Kate (Katherine Parkinson), comes up with the idea of staging a Live Aid-style concert for him to headline, with the goal of bringing peace to a war-torn area of Georgia. But while Harry is announcing the concert, a ceasefire is declared. Under pressure from Harry, Kate decides to go to Georgia with her team and get enough images of death and destruction to feed the news cycle for the three days until the concert. The only problem is that her fake war is taken for the real thing, which ends up having very real consequences.

The plot is reminiscent of 1997’s “Wag the Dog,” which is about a political spin doctor working with a Hollywood producer to create a fake war to distract from the President’s sex scandal. The ideas aren’t new, but writer Tim Price doesn’t want to satirize just the twenty-four-hour news cycle or the state of global politics, but also modern celebrity, social media, white (British) privilege, and just the general state of things at the end of the 2010s. That’s a lot for one eighty-four minute film to deal with, and the satire of “How to Fake a War” ends up feeling spread too thin to make any impression. That’s not to say that the film is completely lacking in laughs, but most of it is just loud, underlining everything like that one friend who nudges you and asks if you saw what he just did there after no one laughed at his “clever” observation.

What ends up saving the film as a piece of entertainment (if not as a piece of satire) are the cast and the plot. The twists and turns of the story lead to some genuinely unexpected moments, which keeps the audience intrigued even when the jokes fail. In the lead role, Parkinson mostly opts for understatement, which actually works as the kind of smoothly professional, don’t-fuck-with-me-boys energy of someone who knows they’re great at what they do despite being surrounded by idiots. Pharoah is clearly having a blast letting his ego run wild as Harry who doesn’t care so much about world peace as he does having a part in bringing it about. As the youngest member of the PR team, Lily Newmark is a savvy performer, carefully delineating the moments when she lets out her true self when she’s playing a role for those around her.

Because of the good performances, the film is at its best when dealing with Kate and her team as bumbling upper-class white people stumbling their way through a foreign country, playing with forces they don’t understand. Unfortunately, “How to Fake a War” has a lot more on its mind, and its jokes aren’t sharp enough to work in the way good satire should. There are enough funny moments to keep you watching, but only in the hope that somehow the film will get better as it goes. It never does, though, which is a disappointment. A good satire could be made from this premise – indeed, it has been made – but this isn’t it.