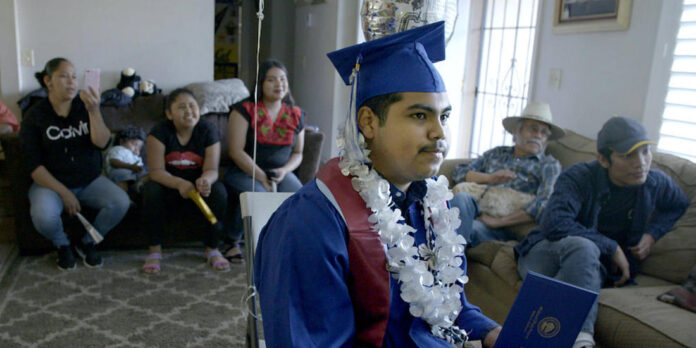 THE STORY – Oakland High School’s class of 2020 confronts an unprecedented year as anxiety over test scores and college applications gives way to uncertainty springing from a rapidly developing pandemic. Efforts to eliminate the school district’s police force unfold against the backdrop of growing nationwide demands for systemic change.

​​​If there’s ever been a year that showed just how powerful young people’s voices could be, 2020 did a hell of a job. Oakland High School’s student body didn’t know what they were embarking on during the 2019-2020 school year, but they showed how resilient and inspiring youth can be even in a time of unprecedented change and turmoil around the world.

Peter Nicks’ “Homeroom” begins with the familiar sights and sounds at the start of the school year. Students are worried about tests, homework, and for seniors, those scary college applications. We see students comparing their ACT and SAT scores and speaking to their counselors about future plans, which it’s almost surreal to look back on a time when life was “normal,” and you thought about the coming months with such optimism and curiosity.

The main issue that takes center stage during the film’s first half is Oakland Unified School District’s annual budget. More specifically, the board is looking to make cuts to specific programs that are valuable to students, while its police force is allocated millions of dollars annually. At one point, a news report states the district is the only one in California’s Alameda County with a police department. Student directors Denilson Garibo and Mica Smith-Dahl are the stars as they voice their frustrations at the board for ignoring student and community input, which overwhelmingly supports defunding the district’s police department. Remember, this is 2019 – this school is so ahead of the curve when it comes to the many social issues coming in the next year.

In between so many issues that the district and school face, the part that shines the most are kids getting together and using their voices. It’s inspiring to see them attending school board meetings, something no kid would ever want to do, but they know it is important to make a change. When the COVID-19 pandemic closes their school, they still meet regularly online to discuss how they can make the campus a better place for students. And following the murder of George Floyd in May 2020, these students were participating in protests and even organizing them. They found a way to be a part of history, and it’s inspiring to see them get back up when they’re defeated in some way.

Of course, we still get to see these kids be kids. Scenes of them constantly on their phones in class, sometimes even leaving to take a call, might make you roll your eyes and say, “Kids these days!” But when the pandemic rolls around and you see them relying on technology to keep in contact with friends – and if you look at your own weekly iPhone screen time report – you may want to consider taking that comment back. Seeing scenes from football games and parties makes one nostalgic for the carefree high school days and months before the pandemic. And with no talking heads, interviews, or narration, Nicks’ documentary feels so much more natural than many others.

Though there are positives with Nicks’ approach, it does lead to some disconnect with the students. Since we, the audience, essentially drop into moments and interactions, we never fully get to learn much about the students in the documentary. Garibo is one that we spend the most time with, but aside from discovering that he’s an undocumented student and a student director, we don’t ever get a chance to know what motivates him to want to fight for his fellow students or what got him into politics. We know even less for a lot of the other students, and in many instances, it’s hard to catch their names. The documentary is entirely about them, so it’s a shame that we don’t really get to form a deeper connection. The documentary also covers many different topics and moments that go on during this school year, so at times it does seem like it loses focus.

“Homeroom” captures a moment that will likely never be forgotten in history, with a group of young heroes that can give anyone a bit of hope for the future. This documentary doesn’t nail it completely, and there’s a bit of disconnect between the students and the documentary’s primary focus. Still, when it does capture students banding together and fighting for what’s right, it sends a powerful message. In a time when we’ll likely be bombarded with several COVID-19-era documentaries and films, this is one that naturally captures the world-changing through an interesting lens.