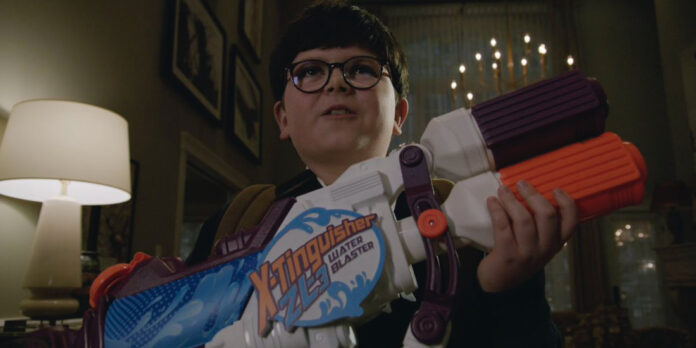 THE STORY – A married couple tries to steal back a valuable heirloom from a troublesome kid.

​​​​There’s a line in Disney’s “Home Sweet Home Alone” that pretty much tells you all you need to know about the movie. While watching a sci-fi remake of “Angels With Filthy Souls,” the movie Kevin McCallister from the original “Home Alone” isn’t allowed to watch; one character says, “This is garbage. I don’t know why they are always trying to remake the classics. They’re never as good as the originals.” It’s true in almost all cases, especially this one. “Home Sweet Home Alone” tries to relive the magic of the first film but falls flat consistently.

In this version, instead of Kevin, we get Max (Archie Yates), a relatively spoiled English boy who can’t stand the idea of going to Tokyo with his family during the holidays. He and his mother Carol (Aisling Bea) aren’t afraid to sass talk to each other in public, and they definitely don’t hold back any chance they get. In an attempt to escape from his extended family as they’re about to head to the airport, Max climbs into the back of a car parked in the garage to watch Road Runner cartoons. After waking up from a nap in the car, he finds the house completely empty. What’s there to do? Play video games, pig out on candy, and make a mess.

Meanwhile, the holiday season isn’t very cheery for Pam (Ellie Kemper) and Jeff (Rob Delaney), who recently lost his job. With few options available to them financially, the couple decides to put their home on the market without telling their two children. During an open house, they meet Max and Carol, who spots an old collection of porcelain dolls that are creepy in every way — one even has its head on upside down — but super valuable. A few days later, after Jeff’s show-off brother Hunter (Timothy Simons) arrives with his family, Jeff realizes he can sell the doll and better provide for his family. The only problem is he can’t seem to find the ugly doll anywhere. There’s only one possible explanation: Max took it. Pam and Jeff then hatch a plan to break into Max’s home — thinking no one’s home — and bring the doll back. Max overhears their plan one day and mistakenly thinks they’re trying to steal him and sell him to an older woman, thanks to a terrible joke Jeff made at the open house, and begins to plot his own revenge filled with nostalgic booby-traps.

“Home Sweet Home Alone” is full of throwbacks to the original film and even mentions the events that took place. Buzz McCallister (Devin Ratray), now a police officer, hears a dispatcher say there was a call about a child home alone and reveals that his brother Kevin, always up to some hijinks, puts in that prank call every year. There are also a few funny moments, but ultimately, this remake begs the question, why did it have to be made? It certainly doesn’t top the fun of the first film, nor do any of the performances stand out in the same way. It’s especially such a shame with Yates, who was so silly and memorable in “Jojo Rabbit” but barely has any opportunities to shine. The same goes for Simons and Kenan Thompson, who plays the real estate agent helping Pam and Jeff. They’re both hilarious comedians but so underused here.

Though this is a very paint-by-numbers remake, the most significant difference in this version is that it tries to make audiences root for the bad guys as much as the good guy. After seeing the trouble that Pam and Jeff are going through and knowing how tough it would be for their kids to leave their home, you ultimately want to see them get the doll back and live happily ever after. But where’s the fun in that? What made the first one so delightful was the tortuous game Kevin played with the burglars. Here, when you’re hoping both sides to win in some way, it doesn’t have the same effect. You also can’t help but wonder who this film was made for. Young children won’t really understand the jokes unless they’ve seen the first film, and adults already have “Home Alone” to watch, so they don’t need to bother with this one.

“Home Sweet Home Alone” is yet another remake that doesn’t stand out. Sure, there are funny bits, but when you underuse cast members and know that you won’t be able to top the original, there’s really no point in going through all the trouble. Just because you can remake a classic doesn’t mean you should.