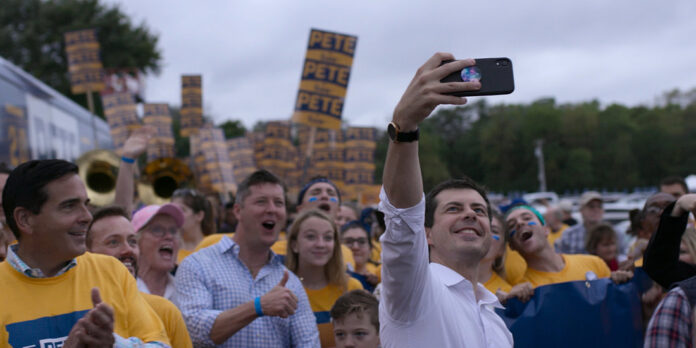 Documentaries about political figures are tricky to make. With politics becoming ever more televised and gamified, politicians have more ways to speak to the public than ever. They need to be even more careful about what they present to the public and how they present it. When a politician agrees to have a camera crew follow them around and document their lives – particularly amid a campaign – it’s highly unlikely that they want the end product to be critical of them, as that could hurt their image and thus their chances for reelection. Slip up even a little – film something you’re not supposed to, ask a question that’s too personal or too probing, delve into uncomfortable history – and a documentarian risks losing the access required for the project.

​Perhaps unintentionally, Jesse Moss’s “Mayor Pete” opens with its most revealing moment: Moss is prepping to interview their main subject, then-South Bend, IN mayor and first openly gay Presidential candidate Pete Buttigieg, by speaking with Buttigieg’s husband, Chasten. He asks Chasten if there’s anything he should ask Pete. Chasten thoughtfully suggests asking him if he felt that he could be his true self on the campaign trail after so many years of hiding/denying who he was. Moss then asks if Pete is actually ready to answer that question, to which Chasten replies that he should be, before offering a conciliatory “you can try.” Upon entering the room, Pete’s first question is if his interview chair looks too regal. Chasten admits to Pete that he gave Moss some questions to ask and admonishes his husband not to bullshit them.

Rarely, a documentary will so thoroughly pull back the curtain like this, let alone begin by doing so. In context, it reads like something of an apology: “We tried. We really did. But what you see here is what you’re gonna get.” It’s unfortunate because Buttigieg is something of a unicorn. A self-described Maltese-American, left-handed, Episcopalian gay war veteran Mayor, Buttigieg’s story is a quintessentially American story of overcoming adversity by lifting yourself up by your bootstraps. He’s a regular Midwestern guy who just happens to have been a Harvard-educated Rhodes Scholar, a soft-spoken man of the people who turned around his hometown of South Bend by listening to people and putting his words into action. He also happens to have a lot of walls built up over the years from trying to hide his gayness, and try as they might, neither Moss nor Buttigieg’s own husband could break through those walls during the making of this documentary. Buttigieg may protest that his running for the highest office in the land “wasn’t a Great Man thing,” but he knows what’s at stake, and he’ll be damned if he’s going to let the cameras capture him losing his temper or saying anything untoward about anyone or anything. He speaks in platitudes and generalities, often repurposing phrases and stories from his stump speeches and media appearances for the documentary. Because of that (and also, to be fair, because of the media’s obsessive reporting on him during the 2020 election cycle), there’s very little new to learn about Buttigieg in the documentary. Everything he shares feels calculated to make the viewer feel closer to him while not revealing anything about his truest self.

In sharp contrast, Chasten is remarkably open, often overflowing with emotions directly to the camera, especially in candid moments like when Pete is projected to be in the lead at the all-important Iowa caucuses. The most moving scene of the whole film is when Chasten visits a camp for LGBTQ children, and it’s hard not to wonder why it’s the prospective first husband there instead of the Presidential candidate himself. Despite the impressive level of access Moss and his crew got to the campaign, we never see actual decisions being made – when to go where and why who should do this or that and how – which begs the question of why even make this film in the first place? We all saw these events covered on national TV, and we know the outcome. Moss never even attempts to recreate the in-the-moment feeling of the biggest career-making (or breaking) moments for Buttigieg’s campaign, which leaves the film almost utterly devoid of stakes. The film has no sense of urgency, and even though we keep hearing how historic Buttigieg’s candidacy is, there’s not much sense of excitement, either. Instead, the film takes on the persona of its main subject: Even-keeled and earnest to a fault. That’s a fine choice to make, especially if that’s all the subject is giving you. But because of that, it’s hard for “Mayor Pete” to feel like anything but a missed opportunity.

It’s great that such a historic moment for representation in American politics was captured for posterity. Still, when it offers as little insight to that historic moment as this, it feels disingenuous, more like a campaign ad than a feature film. Moss may steer clear of hagiography, but he never delves too far beneath the surface, either, coming up with nothing new or interesting to say about its subject. It may do right by what its subject wanted, but it comes up short of what he deserved.