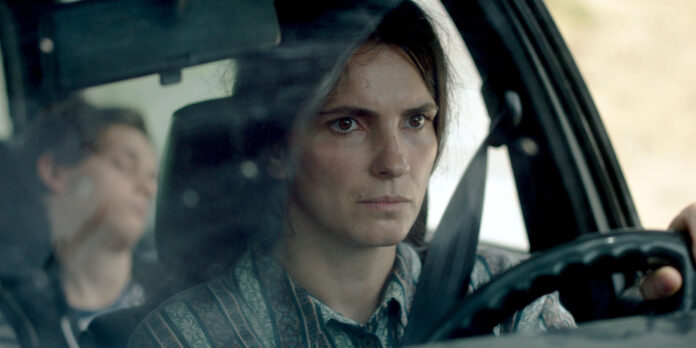 THE STORY – Hoping to provide for their families, struggling widows start a business to sell a local food product. Together, they find healing and solace in the new venture, but their will to live independently is soon met with hostility.

​​​Ajvar, a roasted red pepper spread, is a staple in any Balkan household. Growing up, when my family gathered for dinner, the fiery red condiment often had its place at the table, and many times a meal would be incomplete without it. Ajvar brings together family, friends, and neighbors for good times, and it’s what gets people through the bad times, too. And in Blerta Basholli’s film “Hive,” based on a true story that earned three awards at this year’s Sundance Film Festival, the spread can even start a female revolution.

Fahrije (Yllka Gashi) lives in the small and tight-knit village of Krusha e Madhe which experienced one of the biggest massacres during the war in Kosovo in 1999. Fahrije’s husband Agim, like many other men in the village, has been missing for the last several years. As she searches through body bags, hoping to find him among the others, she’s come to accept that he’ll likely never return. In contrast, other family members, including her father-in-law Haxhiu (Çun Lajçi), don’t believe that’s the case. The end credits state that more than 240 people were killed and went missing in this village. Today, 20 years later, more than 1,600 people in Kosovo are still missing, 64 from Krusha e Madhe.

As the primary caretaker for her family, Fahrije can’t dwell on the past and must find ways to financially make ends meet when her honey sales aren’t fruitful. But finding support in this patriarchal village, where gossip runs rampant, is difficult, including from her own family. When she decides to get her driver’s license — the only woman in the room during the test — people are stunned, and her father-in-law constantly tells her that she has to know her place in the family.

When she decides to start her own business selling ajvar, with the hopes that other widowed women in the village will join, Fahrije begins to walk around with a target on her back. The gossip, stares, insults, threats, and being shunned would be enough to break any individual, but not Fahrije. She perseveres, knowing that it literally means survival for her family, and soon enough, others lend their support. For the women in this village, making ajvar gives them an escape from their broken hearts and worries and makes a path toward freedom.

Films from the Balkans often connect back to the war in the 1990s that has left an unhealable scar in the region. While Basholli honors that past in her film, the focus on women in an area where misogyny still lingers takes the film in a whole new emotional direction. People in town call Fahrije a whore, tell her that her husband would be ashamed of her if he were alive, throw rocks and try to destroy her business, and the men in other households bar women from seeing or speaking with her. One would think this all happened decades ago, but in reality, it was just a few years ago.

At the center of what really makes it all work is Gashi’s quietly captivating and moving performance. She stands tall and faces the hostile men in town while also remaining kind and gentle to the women who have turned their backs on her, knowing that it wasn’t their decision. You can’t help but root for her and hope she enacts some revenge of her own. While starting this business, she also grieves the loss of her husband and has to provide support, comfort, and the harsh truth to her family, who so desperately want to believe he’ll return. Gashi manages to go through every emotion in her performance and takes us on an emotional rollercoaster of our own. Lajçi, too, breathes life into a complex character, playing a man who can be frustrating in one scene and heartbroken in the next.

Aside from a few moments, there’s very little that isn’t directly related to Fahrije and her story in this film. She briefly attends a protest in front of a government building where people voice their frustrations over the lack of information on what happened to their family members years ago. But we don’t hear from other people in town about who they lost and what that loss means to them. We also don’t learn about Agim until almost the end of the film, when she and her father-in-law share that he was a gentle and quiet man who built beehives and never got stung. Hearing more about Agim early on in the story, maybe even seeing flashbacks of them together, would have made the story even more impactful and showed the harrowing losses from the war.

Basholli takes a familiar story of female resilience and elevates it with the backdrop of the war in Kosovo and its effects on families, the misogynistic ways of a small village, and the freedom that one can find in the most mundane products. It’s disturbing to see the violence that women still face to this day, especially those who break from the norm, but Fahrije’s story is inspirational. The ending may dissatisfy some viewers, with there still being no answer as to what happened to Agim, but often that’s what happens in war. At least there’s ajvar to bring people together and focus on the positives in life.