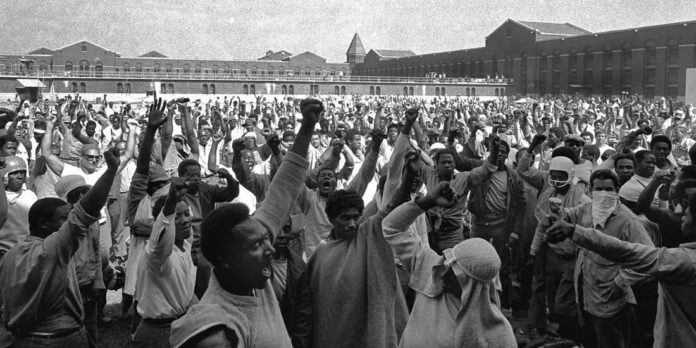 THE STORY – During the summer of 1971, tensions between inmates and guards at the Attica Correctional Facility are at an all-time high. On the morning of Sept. 9, it all comes to a head as Attica becomes the stage for one of the largest U.S. prison riots ever.

​​If there’s one thing that can be learned from an examination of American history, it’s that most events and attitudes are cyclical and recurring, even if they feel tied up in the current moment. “Attica,” the new documentary from filmmakers Stanley Nelson and Traci Curry, tells the story of the infamous 1971 prison uprising and all that followed in exacting detail. It’s a harrowing tale of human rights and the abuse of power. While it’s an effective examination of a specific moment in time, it finds chilling resonance with issues that our country is still grappling with and, so often, is content to ignore to this day.

The word “Attica” is perhaps most familiar to the general populace as a passionate cry from Al Pacino’s character in Sidney Lumet’s classic “Dog Day Afternoon.” This documentary seeks to bring the reality of the legendary prison uprising to current audiences, using simple talking heads and archival footage. Survivors of the event and descendants of those who were there are given free rein to tell their stories.

In terms of style, this is a classic, traditionally-directed documentary. There’s little editorializing from the filmmakers as events and recollections are presented and discussed exactly as they happened. Smartly, both actual former prisoners and relatives of prison guards who were taken hostage are interviewed. This gives the impression that the filmmakers are trying their very best to remain impartial by presenting both sides of the story. However, the film’s masterstroke is that this balanced narrative focus quietly clarifies the reality of the event’s conclusion, which is that nobody “won” due to the uprising, except for the vague, politicized concept of law and order. As the film homes in on its conclusion and recollects how this moment in time ended, the focus on simple facts reveals that the bloody final chapter was somehow both avoidable and, in classic American fashion, unfortunately inevitable, and there’s no rightful side to take except the side of overdue justice.

This is a richly told story, thanks to the extremely specific testimonies of those who were there. With a widely seen historical event like this, what helps bring it to life all these years later are the little details that the interviewees recount. The filmmakers wisely allow sense memories and small, human moments to be highlighted in the interview footage which they use. These details may be minuscule, but they help paint a broader picture. A lot of these memories are horrifying and, without explicitly stating it, the racially-charged violence and police brutality grimly indicates how little progress this country has truly made. The film also wisely jumps right into the action, putting the audience squarely in the center of the uprising before pulling back and providing context. This has a disorienting, rushed effect that successfully replicates some of what it may have felt like actually to be there.

It may not break new ground in terms of documentary filmmaking style, but “Attica” successfully brings an under-discussed historical event to modern audiences in a way that subtly highlights its parallels with the current day. It serves as a compelling examination of injustice and how this country’s punitive focus can only serve to make us more misguided in our idea of what is right and wrong.