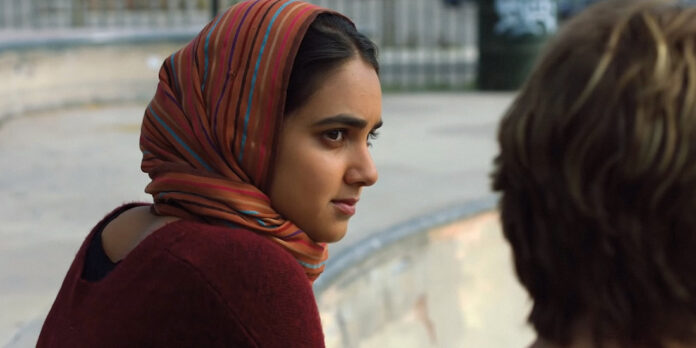 THE STORY – Muslim teenager Hala copes with the unraveling of her family as she comes into her own.

It’s an absolute delight to write about Minhal Baig’s “Hala” which may be a small film, but it’s so full of love, energy, and passion that it radiates off the screen. “Hala” is a tender, touching tale of a young woman struggling to make the transition from adolescence to adulthood. It beautifully portrays the complexities of being a child of immigrant parents and the clash of two cultures (Pakistan and America). The film’s screenplay may follow the same narrative beats as many “coming-of-age” teen dramas, such as “Lady Bird” and “Juno,” but Baig never allows the tropes of the genre to hold her back from the film’s more prominent message. We’ve never quite seen the life of an American Muslim teenage girl be so honestly portrayed on the big screen – until now.

The titular Hala (played by Geraldine Viswanathan) is in her senior year at school. Instantly we are made aware of the conflicts between her traditional home-life and her sexual awakenings. The film opens on an empty living room, the window open and the peaceful sounds of prayer. However, we quickly discover that Hala has skipped her morning prayers, and she is in the bathtub masturbating. This scene is shot in a tasteful manner and is never exploitative or sensualized in any way. This is what teenage girls do, it’s a simple truth, and it shouldn’t be treated as such a taboo in our society.

Hala’s mother, Eram (Purbi Joshi), is overbearing and overwrought with concern for her only child, fretting over seemingly silly trivial things such as Hala skateboarding without a helmet. Her father, Zahid (Azad Khan), seems far more laid-back but is still devoted to the traditional way of life, with a rigid and rather conservative set of beliefs on the roles of men and women. Hala seems closer to her father, helping him with his crossword puzzles and conversing with him in mostly English, while her mother only ever replies in Urdu.

Her parents seem to be set in their ways, with the only bright moment in the family’s life being a car journey where Eram drives and sings along to a song on the radio. It’s a bittersweet moment where we see a glimpse of who Eram was before her marriage and the birth of her daughter. This former shell of a woman who used to have so much spark and energy. The dread of an arranged marriage for Hala looms over her – after all, it was the fate of her mother who now promises to “find a good Muslim man” for Hala.

However, Hala has developed feelings for a fellow classmate Jesse (Jack Kilmer) and the two of them bond over their love for skateboarding and poetry. We watch as their relationship slowly unfolds, with the two of them becoming more intimate. These scenes are beautifully captured, acted, and played out in such a subdued manner that it’s a testament to Baig’s direction and the acting capabilities of these two young actors. Hala’s life slowly tailspins out of control, through no fault of her own, as she begins to discover secrets that her parents have been harboring. Baig never allows for the film to become overly sentimental or melodramatic, and every twist and development occurs in a natural fashion.

At certain points, the film’s narrative feels slightly bogged down with too many characters and a few plot points that don’t exactly evolve in a natural manner. The film’s ending feels a little rushed, which is a shame considering how the film’s narrative unfolds; like the steady eruption of a volcano. A minor storyline involving Hala’s English teacher (Gabriel Luna) feels a little disjointed and a distraction, coming out of nowhere and never fully resolved. However, this is only a minor complaint, as the film’s main storyline and focus on the relationship between Hala and her mother, is so well developed that one is willing to overlook the film’s smaller issues.

“Hala” is beautifully shot by cinematographer Carolina Costa, who captures the intimacy of Hala’s world behind closed doors, but also manages to capture the vast wonder of the world that exists outside the claustrophobic ecosystem of the household. The film’s final shot offers so much hope and optimism for many young girls in a similar situation as Hala, showing us that there’s more to life than our parents’ expectations. Ultimately, we see that Hala embraces her two worlds and has found her own identity in both. “Hala” is a bold, inspiring, and touching film. One I didn’t realize I needed until I watched it.