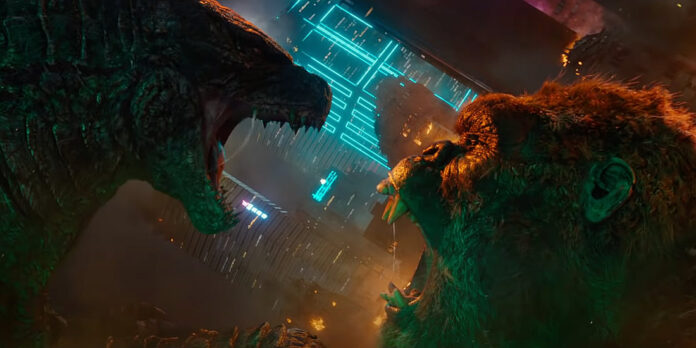 THE STORY – Fearsome monsters Godzilla and King Kong square off in an epic battle for the ages, while humanity looks to wipe out both of the creatures and take back the planet once and for all.
​
THE CAST – Alexander Skarsgård, Millie Bobby Brown, Rebecca Hall, Brian Tyree Henry, Shun Oguri, Eiza González, Julian Dennison, Kyle Chandler & Demián Bichir

​​​We knew it was always building up to this. Once Warner Bros. announced new Godzilla and King Kong films, it was inevitable that the two classic movie monsters would meet face to face on the big screen and square off in a fight for the ages. Bolstered by modern-day visual effects and all of the destruction that studio money can buy, “Godzilla vs. Kong” is a huge action film in every sense of the word. The scale and verticality of how these two icons are framed in Adam Wingard’s latest film make this a must-see IMAX movie event. Of course, we are still going through a pandemic, so if you don’t feel comfortable going to the movie theater, you can still catch the fight of the century on your devices at home through HBO Max. Does the movie deliver, though? It depends on why you’re watching in the first place.

It has been five years since the events of “Godzilla: King Of The Monsters.” Godzilla and Kong are the only two known Titans remaining on Earth. Kong is being kept inside of a giant dome hosted by the company Apex Cybernetics that acts as a stand-in for Skull Island while Godzilla’s whereabouts are unknown. Kong has developed a special relationship with a deaf child named Jia (Kaylee Hottle), with who he can communicate telepathically and through sign language. Bernie Hayes (Brian Tyree Henry) is a former Apex employee who is now a Titan conspiracy theorist with a podcast that is listened to by many, including a returning Madison Russell (Millie Bobby Brown), and together the two discover a terrible plan that Apex is using to manipulate Godzilla into attacking without provocation. Meanwhile, Apex CEO Walter Simmons (played by Demián Bichir) is recruiting Dr. Nathan Lind (Alexander Skarsgård) to lead a mission deep into the Earth’s core to discover a new power source within Hollow Earth. Nathan elicits the help of Jia’s adoptive mother, Dr. Ilene Andrews (Rebecca Hall), an anthropological linguist, to get Kong to help them travel to Hollow Earth, where Kong might also discover a new home similar to Skull Island. With all of these moving pieces in place, it’s only a matter of time until Godzilla emerges and crosses paths with Kong, leading to a showdown of epic proportions.

Let’s be clear right off the bat; we’re not here for the plot. We’re not here for any of the human stories. It helps if that aspect of “Godzilla vs. Kong” is serviceable and not downright terrible (as it was in “Godzilla: King Of The Monsters“), but that’s not ultimately why we’re here. Anyone who watches this movie is paying to see Godzilla vs. Kong. In that regard, the film over-delivers with three absolutely incredible action sequences that will put a smile on the face of the inner child in you. If you ever grew up playing with action figures, imagining what it would be like to have your two favorites do battle in large settings, “Godzilla vs. Kong” will reawaken that sense of wonder and awe. Sure, the story for how we get to these scenes is flimsy at best (I still don’t know what Brian Tyree Henry is doing half the time with some of the “choices” he’s making as an actor). Still, to the screenwriter’s and Wingard’s credit, they have enough likable actors populating these roles and know how to utilize them so that they neither add nor subtract from the overall experience. It also helps that the film moves at a breakneck pace, clocking in at under two hours, spacing out the big action sequences well enough that we’re not given enough time to get annoyed by the human characters before the next confrontation between Godzilla and Kong occurs.

Without getting into spoilers, the three main action set pieces in “Godzilla vs. Kong” are fantastic in how they’re captured and presented to the audience. The fight on top of the battleships over the water is a unique setting that allows us to see some dynamics that we’ve previously never seen in one of these movies before while the encounter in Hong Kong is a nostalgic throwback to why people fell in love with these movies in the first place. And as for the final conflict? Let’s just say there is a theme that the movie is working with that pertains to humans’ inability to control both nature and artificial intelligence, and it comes to a head by the end. As I mentioned before, it’s not the most revolutionary storytelling we’ve ever seen before, but it’s good enough to get us from point A to point B without dragging down the real reason why we’re here in the first place.

“Godzilla vs. Kong” is a logical and successful continuation of what Warner Bros. set out to accomplish with “Godzilla,” “Godzilla: King Of The Monsters,” and “Kong: Skull Island.” Kong himself is more fleshed out as a character and given a tremendous amount of heart and depth, which adds another layer of emotional connectivity to these characters that I wasn’t expecting. It made me more invested in what would happen when he squared off with Godzilla and made up for the weak human characters, who admittedly take up a lot of the runtime but at least avoid the kind of embarrassment that would’ve had an overall negative impact on this film. As it stands, this is my favorite of the Titan films that Warner Bros. has produced so far. The soundscape is booming, the visuals are beyond mammoth, the score is thunderous (if a bit unmemorable), and the action is everything you’re hoping it will be. Are you Team Kong? Or Team Godzilla? Grab a ticket, sit back, and enjoy the fight.