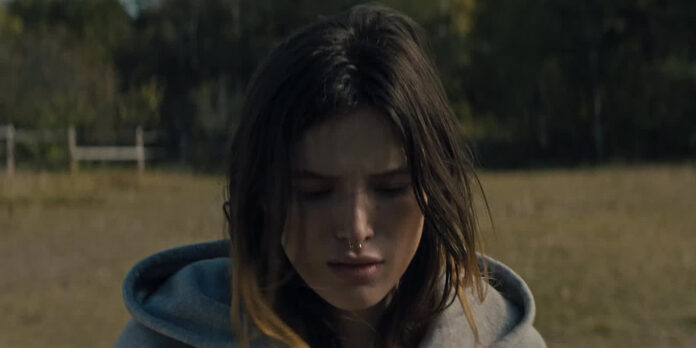 Small towns have always been the backdrops for thrillers and westerns. There’s something about them, whether it be the people or the towns themselves, that harbor secrecy, and oftentimes, hate. Everyone in the town accounts for themselves and even the law runs differently. This is no different than the town Golden where “Girl” takes place. It’s haunted by the people in it and a deadly secret that could change the town and its residents forever.

The film follows Girl (Bella Thorne), a standoffish woman who travels to the town of Golden to find her estranged father. We soon learn that this isn’t a joyful father-daughter reunion, but that Girl has traveled all this way to kill her father before he can do the same to her Mama (Elizabeth Saunders). Girl quickly realizes that Golden comes with its own problems as strange characters descend on her right as she arrives. With the town’s Sheriff (Mickey Rourke) watching her every move, Girl must find a way to get her revenge and come out alive.

The film feels a bit one-note throughout, with the story transforming into a cat-and-mouse game after the first 45 minutes. While the story is about the titular Girl, she never feels like an active participant in the film’s narrative. Almost everything is out of her control as soon as she steps foot in Golden – up until an axe-baring finale. She doesn’t say much, and in the end, doesn’t do much other than curse out everyone she comes in contact with. Bella Thorne’s performance heightens the material she’s given here as she plays Girl with the right amount of reserve and mystery, something this thriller desperately needs once the plot has stretched thin. Amongst her is writer-director Chad Faust playing The Charmer, a man Girl meets along the way whose intentions you’re never quite sure of. Faust plays him with an overwhelming charisma, making for one of the most entertaining villains of the year.

While the film loses its grittiness long before the credits roll, at times, “Girl” is an intriguing watch. It dives headfirst into exploring intergenerational trauma and tries to analyze just how hard it is to break away from the influence of our families. Faust plays with the theme of “good vs. evil” and utilizes old tropes from westerns for each of his characters. Faust asks the audience to mull over the questions of morality as we watch Girl slowly come to the realization that the people closest to her may not be who they seem. In the end, “Girl” is a fine film that takes many inspirations, but falls flat after the 45-minute mark. The twists come fast and too often, and ultimately, they leave you drained and expecting even the most “shocking” reveals.