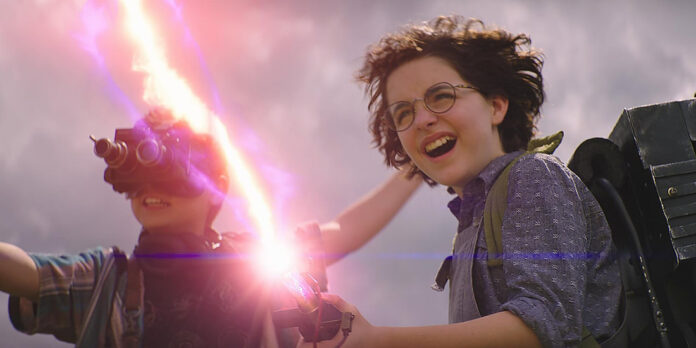 THE STORY – When a single mother and her two children move to a new town, they soon discover that they have a connection to the original Ghostbusters and their grandfather’s secret legacy.

​It’s been 32 years since “Ghostbusters II,” released in theaters, and 37 years since the original film was released. We’re living in an age of nostalgia, where Hollywood is consistently looking back at older properties to re-launch them for a new era. Some have been more successful at doing this than others. While there was another “Ghostbusters” film released in 2016 that attempted to reboot the franchise with an all-female cast, that film was (wrongfully, in my opinion) cast aside, as fans didn’t want a new storyline, but rather a continuation of what came before. Enter original franchise creator Ivan Reitman’s Academy Award-nominated son Jason Reitman, who has directed a series of excellent films throughout his career, including “Juno,” “Up In The Air” and “Tully.” With a deep-rooted love and respect for what came before and enough directorial competence to introduce new elements for a new generation, Reitman delivers an enjoyable crowdpleaser that will surely satisfy fans of the original films while bringing in a whole new group of new audience members. “Ghostbusters: Afterlife” is a true sequel longtime fans have waited nearly 40 years for, and the wait was worth it.

Callie (Carrie Coon) is a single mother and the daughter of the late Dr. Egon Spengler (the also late Harold Ramis), who just recently passed away. Callie and her two children Phoebe (Mckenna Grace) and Trevor (Finn Wolfhard), are evicted from their home and are forced to travel to Summerville, Oklahoma, to stay and inherit Egon’s old farmhouse, which many of the locals consider being haunted and have cast numerous superstitions over. Upon their arrival, the socially introverted but brilliant Phobe enrolls in a new school where she develops mutual respect with her laid-back teacher Mr. Grooberson (Paul Rudd), whose idea of teaching is to show his students classic horror movies such as “Child’s Play” and “Cujo” rather than actually teach a class that is not interested in learning anything about the earth and the town’s (un)naturally reoccurring seismic shifts. These strange events are traced back to an old mine that once belonged to the alleged occultist (and “Ghostbusters” fan-favorite villain) Ivo Shandor. Phoebe’s natural curiosity leads her to learn who her grandfather was: a member of the original Ghostbusters. With this new knowledge, the discovery of some of her grandfather’s old equipment, and some help along the way, Phobe, her friends, and family begin a generational mission to solve a mystery that could potentially threaten the entire world.

Much of what makes “Ghostbusters: Afterlife” so delightful is the new likable cast of characters. Paul Rudd and Carrie Coon are reliable as the two adults who develop a humorously cute romance, but it’s the casting of the child actors where Reitman scored big. He knew that when Harold Ramis tragically passed away, that the story needed to be about his character Egon Spengler’s granddaughter. Enter Mckenna Grace, who, after being Emmy-nominated in “The Handmaids Tale,” and stunning audiences with her wise beyond her years performances in movies such as “Gifted” and “Troop Zero,” turns in another memorably impressive performance as the highly intelligent but socially awkward outcast Phoebe Spengler. Constantly cracking lame jokes in an attempt to fit in better with others, her passion for science is the only connection she feels. It is heartwarming to see her develop strong bonds with Podcast (a charismatic scene-stealing Logan Kim), a (you guessed it) podcaster who accepts her for her oddities. Reitman allows time for the characters to be introduced, establish who they are, and watch them grow. As Trevor gets looped into Phoebe’s journey along with a local girl he has a crush on named Lucky (Celeste O’Connor), Reitman keeps his story focused on this new group of characters, allowing us to develop empathetic connections with each of them. As a unit, it is such a thrill to witness them driving in the Ecto-1 (Trevor, at only age 15, doesn’t have his driver’s license yet), using the proton packs to zap and capture rogue ghosts. All of the four main child actors, along with Rudd and Coon, are all highly dialed into the film’s tone for humor as some of the jokes and gags are genuinely hilarious, providing a nice level of entertainment which the whole family can appreciate without the story ever becoming too cheesy or self-serious.

Reitman’s overall tone and direction may be reminiscent of “Stranger Things” (And I’m not just saying that because of the inclusion of Wolfhard) as it mixes nostalgia with light humor, a small-scale story, with some truly horrifying jump scares along the way. Still, for the kind of story he wanted to tell that both felt like a blend of the past and the present, it’s entirely appropriate. There is an admirable use of both visual and practical effects in the environments and ghost creatures, which helps the film to both pay homage to the filmmaking techniques of the past while also making it feel contemporary. Only a director of Reitman’s caliber could’ve pulled this off as many others would’ve defaulted to green screens, and sloppy visual effects work to overwhelm the story and the characters, which is Reitman’s strong suit. However, grounding the story and providing these real elements helps give “Ghostbusters: Afterlife” the emotional core at its center, which was desperately needed to justify its existence other than serving as a shameless cash grab. It serves as a moving tribute to Harold Ramis, the original movies, and presents an equally engaging story of a broken family finding their identity, with the next generation of kids saving the world (considering the subtle ties the film’s existential threat has to global warming, this message is most welcome).

There are some components in “Ghostbusters: Afterlife” which may not land for everyone. The jokes can be hit or miss, but they occur so frequently that you’re bound to fall to its charm at some point (the hilarious inclusion of multiple miniature Mr. Stay-Pufts absolutely killed me), and some of the plot threads can feel a bit rushed as the film zips on by from one scene to the next with not enough time given to explain what exactly is going on. However, the strength of Reitman’s direction, the performances, the chemistry from the cast, and multiple surprises, which I will dare not spoil here, all help make this long-overdue sequel/reboot a worthy successor to the original two films many have continued to cherish for decades and an exciting pathway for what the future holds ahead.