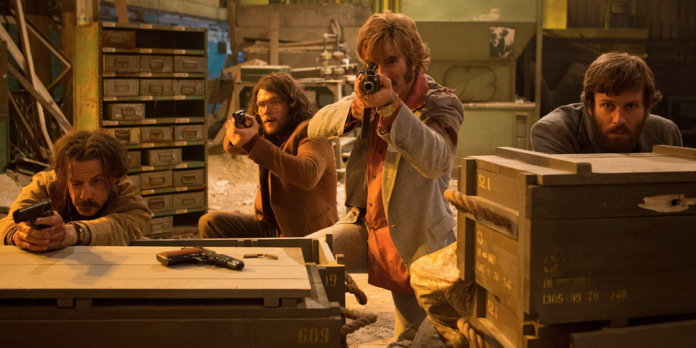 THE STORYJustine brokers a meeting in a deserted warehouse between two Irishmen and a gang led by Vernon and Ord, who intend to sell them a stash of guns. But when shots fire during the handover, complete pandemonium ensues, with everyone at the scene suddenly thrust into a heart-stopping game of survival.

I had high expectations heading into Ben Wheatley’s crime film “Free Fire.” After premiering around the festival circuit and getting some substantial buzz, this had all of the ingredients to become one of my favorite films of the year. Instead, the film ends up being somewhat of a disappointment and I regrettably find myself in the middle in terms of my thoughts for Wheatley’s “shoot em’ up” crime film. “Reservoir Dogs,” “Snatch,” and countless other crime films are better than “Free Fire” but that does not mean there’s absolutely nothing to enjoy here.

Taking place in a Boston wearhouse during 1978, “Free Fire” is the story of a gun deal gone horribly wrong. Justine (Brie Larson) brings together Chris (Cillian Murphy) and his men, with an erratically behaved Vern (Sharlto Copley) and the calm and cool charismatic Ord (Armie Hammer). Tensions flare up though when Chris’s friend Stevo (Ben Riley) gets signaled out by one of Vern’s men, Harry (Jack Reynor) for a prevoius insult that Stevo had coincidentally commited the night before. With so many guns in the room, so many personalites and so many ways this can go, it’s only a matter of time before the professionalism that each person tries to put up, gives way and the bullets start flying.

“Free Fire” falls squarely into the chaotic, mayhem action films that audiences take great glee in. With colorful characters, colorful language and lots of colorful blood to boot, “Free Fire” can be quite fun at many points. The characters are all distinguishable and are equipped with many one-liners and character beats that are enjoyable. However, we never get to really know any of these characters beyond the surface level and their realtionships to one-another. Wheatley’s film clocks in at a brisk 90 minutes and a large chunck of the film is the much anticipated shoot-out itself. Allegiances switch sides, characters endure huge amounts of punishment (This movie might just set a record for the most amounts of crawling and limping) and shocking deaths occur.

While the actors all do a fine job of conveying various amounts of emotions such as terror, regret, sadness, anger and desperation, nobody particulary stands out, which is a good thing. This is a true ensemble piece and no one should be the center of attention even though everyone will probably walk away with their own favorite chracter or perception of who gives the best performance. In my opinion, Sharlto Copley gives the most fun performance and is a real hoot with his eccentric behavior and rationales. However, I would argue that Sam Riley gives the best performance overall as he has to go through a lot within the course of the hour and a half runtime. Armie Hammer oozes confidence and Brie Larson holds her own in what is predominantly a masculine world. One last criticism I would throw at this film however, is how much I felt Ben Wheatley did a poor job of geographically showing us where each character was in realtion to one another. We never get an overhead shot, or a swooping camera show to show the space between each character. Instead we get countless medium shots, showing the characters crawling and taking cover behind something while bullets and dialogue fly past the screen.

“Free Fire” is still an enjoyable time at the movies, if dark crime comedies are your sort of thing. There is a sort of ridiculousness that perpetuates itself through “Free Fire” that makes everything feel light and fun despite the stakes being life and death. If you turn your critical lens off for a bit, I expect you’ll have a blast watching Ben Wheatley’s latest. However, if you go in looking to disect and breakdown every aspect of the film, you may find yourself gathering more and more flaws to the point of ruining your enjoyment of the film. Nobody gets away clean in “Free Fire,” not even the cinema going audience.