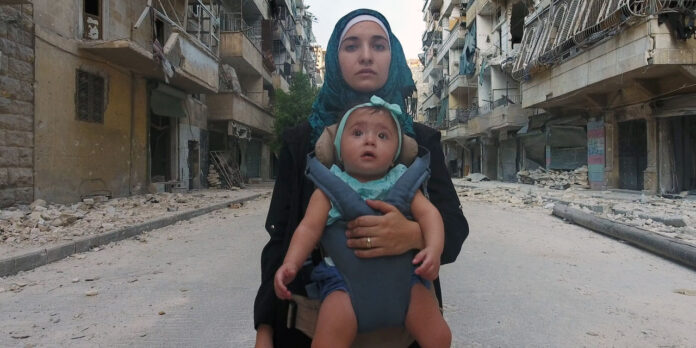 THE STORY – An intimate and epic journey into the female experience of war. The story of Waad al-Kateab’s life through five years of the uprising in Aleppo, Syria as she falls in love, gets married and gives birth to Sama, all while conflict rises around her.

There are some documentaries that will leave you lost for words and an uncontrollable wreck by the end. “For Sama” is one of those documentaries. It’s a truly remarkable film that tells the incredible story of Waad al-Kateab (who co-directed the film along with director Edward Watts), who finds herself trying to survive in the city of Aleppo, Syria. As the Arab Spring erupts across the Middle East, al-Kateab takes up a camera and starts recording to capture this historical moment. The end result is a video diary that lasts 5 years with over 500 hours of footage.

The Arab Spring was met with violent backlash by the country’s ruling regime led by dictator Bashar al-Assad. As a result, civil war broke out with al-Assad turning on his own people, declaring those who sought democracy as “terrorists.” Very early on in the film, al-Kateab meets her husband Hamza, and then finds herself pregnant. The parents-to-be are faced with a difficult decision: they can either flee the city or they can stay to run the city’s only remaining hospital. It’s a nearly impossible decision to make, and one can only imagine the turmoil they must have faced as they weighed their options. Fortunately for the people of Aleppo, they decide to stay to keep the hospital running. Their daughter, Sama, is born into a very dangerous world full of violence and uncertainty, where each day is a brutal fight for survival.

The situation in Syria has been the focus of many documentaries such as “Last Men in Aleppo” (2017) and “Cries from Syria” (2017), but with “For Sama,” directors al-Kateab and Watts manage to take an innovative and very personal approach to tell this story. Through the lens of al-Kateab’s camera, we see the true cost of war; it’s not like anything else you’ve seen on the big screen. There are shots of bloody smears on the floor, the shells of former buildings barely standing, injured children clutching their heads, and grieving mothers wailing inconsolably.

Life inside the hospital is a living nightmare in which Hamza must try to maintain some sense of control and normality. Hamza and his team bravely stay in the city, tending to all wounded as bombs rain down repeatedly. When the first bombs drop down on the hospital, we tremble in our seats. Eventually, even we become accustomed to the shelling. As a spectator, we are transported into this world, and as a result, we feel unbelievably close to the action, perhaps too close for comfort. There’s a constant feeling of intense anxiety, as the audience is helplessly trapped in this uncomfortable situation; as a mere bystander witnessing the horrors unfold on the screen.

One can only wonder how al-Kateab managed to find the courage to keep filming, especially when we encounter young children gravely wounded, on a knife’s edge between life and death. Al-Kateab has stated at Q&A screenings that she found that filming gave her a sense of purpose, and gave her a sense of courage to face the situation she was in. In regards to the documentary’s title, the film is indeed for Sama, and this is al-Kateab’s personal message to her daughter. There’s a sense that al-Kateab feels she must offer an explanation as to why she stayed and must ask for her daughter’s forgiveness. Al-Kateab even addresses this to Sama in the film, stating the following: “You’re the most beautiful thing in our life. But what a life I’ve brought you into. You didn’t choose this. Will you ever forgive me?”

Motherhood is presented in such a beautiful and heartbreakingly realistic way. Al-Kateab captures the unique and special bond that mothers have with their children, while also highlighting the survival instinct that mothers have embedded in them to protect their young at all costs. There are small, intimate moments between al-Kateab and Sama that are presented to us in between the bombardments and the chaos, and for a brief time, we glimpse peace before the harshness of reality cruelly interrupts.

With her unique position in the hospital, al-Kateab documents the suffering of mothers who have lost their children. In one heartbreaking scene, a mother turns to the camera and states her anger at her mourning being captured. It’s a very distressing moment, and there are multiple moments throughout the film which will deeply affect the viewer and will reduce you to tears. However, at no stage do we feel like the documentary is exploiting the horror of the situation, al-Kateab’s camera is simply capturing the reality of life inside Aleppo. This is the life of these poor people trapped in a ghost town cut off from the rest of civilization and ignored by the entire world.

Al-Kateab’s bravery and determination to tell the world her story is admirable, to say the least. This story does indeed have a bittersweet ending, but one gets the impression that al-Kateab and her family will never fully recover from what they’ve had to live through. The film gives us a unique insight into life in a warzone through the female gaze, and captures the world beyond the headlines. Documentaries and films often overlook the stories of women, and this is why “For Sama” is a must-see because it helps bring attention to the forgotten casualties of war. If you’re going to catch one documentary this year, then please make sure it’s “For Sama.”