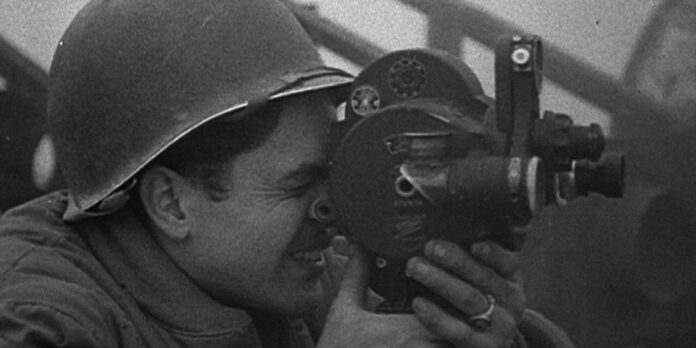 ​The stability of the movie industry during the Great Depression testified to cinema’s utility as a means of escape from hardship. The proliferation of wartime movies in the decade that followed, however, proved that film can also serve as a source of national catharsis, education, and healing. The five prestigious Hollywood directors (Frank Capra, George Stevens, William Wyler, John Huston, and John Ford) who put their careers on hold to enlist in the Army and document World War II used their cameras to bring the sobering realities of war directly to a nationwide audience eager for news from the battlefront. Their films from the ground had a meaningful effect on the public’s conceptions of the war and on the international effort to combat the brutality of Hitler’s regime.

The work of Capra, Stevens, Wyler, Huston, and Ford during World War II is the focus of “Five Came Back,” a stunning three-part Netflix documentary directed by Laurent Bouzereau and written and based on the book by Mark Harris (a journalist, former Entertainment Weekly editor, and essential follow on Twitter). In a clever conceit, “Five Came Back” features five living titans of cinema – Steven Spielberg, Francis Ford Coppola, Lawrence Kasdan, Paul Greengrass, and Guillermo Del Toro – reflecting on the power of the filmmaking of Capra et al. These interviews are interspersed with video footage of the work that was produced before, during, and after the war, such as Ford’s “The Battle of Midway,” and Huston’s “Let There Be Light,” which broke new ground in its examination of soldiers suffering from post-traumatic stress disorder. With its mix of archival footage and modern commentary, “Five Came Back” succeeds in contextualizing the wartime efforts of the filmmakers and in demonstrating the importance of their work.

While the commentary from the five contemporary directors is insightful, the clips from the five World War II directors provides the documentary with its greatest emotional impact. The clips from the war are simply devastating. From John Ford’s recording of the mass loss of life at D-Day to George Stevens’ chronicling of the aftermath of the atrocities committed by the Nazis at the Dachau concentration camp, “Five Came Back” thrusts the viewer into the midst of war. Harris and Bouzerau, assisted by a stirring score from Jeremy Turner, sharp editing from Will Znidaric, and captivating narration from Meryl Streep, achieve a visceral sense of time and place that calls to mind the great documentaries of Ken Burns. Like Burns, the stewards of “Five Came Back” also delve deeply into the emotional toll that the war took on its subjects, and they do so with a coherent arc across the film’s three parts. Part 1 provides a framework for the pre-war careers of Capra, Wyler, Huston, Ford, and Stevens and illustrates why they were motivated to join the war effort in the first place. Part 2 shows how the horrors of war forced the directors to relinquish their initial narrative visions in order to substantively cover the magnitude of the conflict. Part 3 tracks the ways in which their experiences on the battlefield influenced the movies that they made after returning home. This final chapter generates some fascinating revelations. It encourages us, for example, to admire Capra’s “It’s a Wonderful Life” not just as a heartwarming holiday classic, but as a contemplation of loneliness and existential meaning inspired by Capra’s World War II experience.

“Five Came Back” wisely avoids the temptation to offer a sanitized portrait of the filmmakers that it celebrates. It makes clear that the pressure to produce national propaganda occasionally led its subjects to make movies that embraced racism and xenophobia, such as Capra’s “Know Your Enemy: Japan,” and movies that used artificial recreations to highlight the gallantry of the Allied soldiers. Nonetheless, “Five Came Back” is an inspiring tribute to the vitality of cinema and a timely reminder that our artists have the power to make significant contributions during periods of turbulence.