First Details Of “Raya And The Last Dragon” Revealed 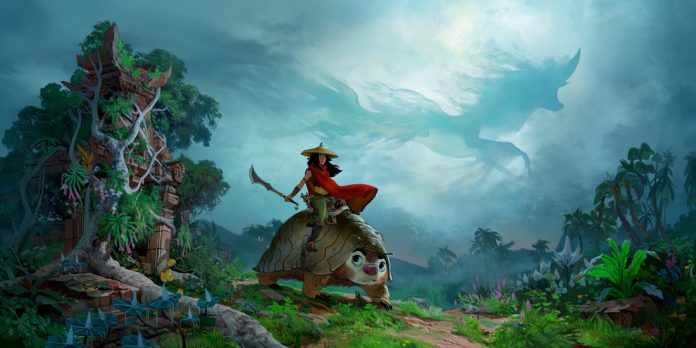 By Melody Lee
​
In a first look with EW, details of Disney’s newest animated film “Raya and the Last Dragon” were revealed. The film is about Raya, a warrior voiced by Kelly Marie Tran (“The Last Jedi”), who embarks on a journey to find the last dragon. Awkwafina will voice Sisu, a dragon that can transform into a human and is the last of her kind. A majority of the film’s animation has taken place remotely during the COVID-19 pandemic, making it unique from a production perspective.

The film will be directed by Don Hall (“Moana” & “Big Hero 6”) and Carlos López Estrada (“Blindspotting”) and playwright Qui Nguyen and Adele Lim (“Crazy Rich Asians”) will cowrite the script. “Raya and the Last Dragon” is the first Disney animated feature to be inspired by Southeast Asia, and Tran is the first Southeast Asian actress to lead a film from Disney. The film will incorporate Vietnamese, Thai, Cambodian, Malaysian, and Filipino cultures. There will also be visual anthropologists, linguists, and dancers from Indonesia looking at the film’s designs before they are finalized.

In her interview with EW, Tran discussed the character of Raya: “She is someone who is technically a princess but I think that what’s really cool about this project, about this character, specifically is that everyone’s trying to flip the narrative on what it means to be a princess. Raya is totally a warrior. When she was a kid, she was excited to get her sword. And she grows up to be a really badass, gritty warrior and can really take care of herself.”

Director Lopéz Estrada talked about how the film’s production reflects the outside world, saying, “I don’t know if Disney has ever made a movie that reflects so much what is happening with the world outside. Even though our team has been working on this movie for years and years and years, it’s going to feel like an idea that we had maybe a month ago because it talks so much about the themes and the questions and the hope that’s happening today and also the lack of hope, and this wrestling with all these really, really important emotions that are happening right now.”