“FIGHTING WITH MY FAMILY” 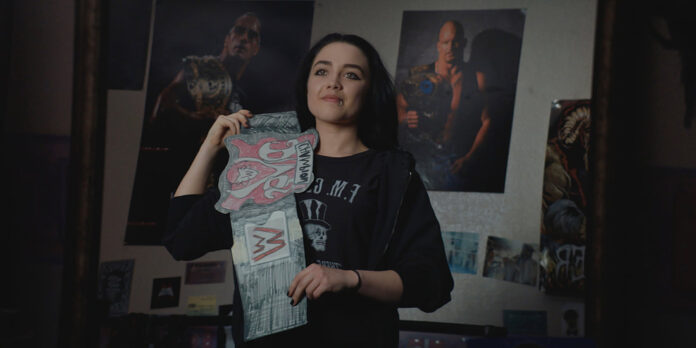 THE STORY – Born into a tight-knit wrestling family, Paige and her brother Zak are ecstatic when they get the once-in-a-lifetime opportunity to try out for the WWE. But when only Paige earns a spot in the competitive training program, she must leave her loved ones behind and face this new cutthroat world alone. Paige’s journey pushes her to dig deep and ultimately prove to the world that what makes her different is the very thing that can make her a star.

​​​I had already bought tickets for the Sundance surprise screening, which, I hoped would be something in the vein of 2017’s surprise “Get Out” or “Tully” from last year. So when it was announced that it would be “the new The Rock movie,” I was a bit disappointed. So color me delightfully surprised that what we instead ended up with was a relentlessly charming and entertaining look at a thoroughly unusual family’s love affair with wrestling in “Fighting With My Family.”

Writer/Director Stephen Merchant (“The Office”) makes his feature solo-directorial debut in this true-life story of a long time British family of wrestling fans who, with a little help from Dwayne “The Rock” Johnson end up catapulting their daughter, Paige (Florence Pugh) to WWE Superstardom in favor of her equally passionate brother Zak (Jack Lowden).

Let’s be clear, although this is more “Little Miss Sunshine” than “Central Intelligence,” “Fighting With My Family” is still a mainstream comedy. The family comedy beats all play out more or less exactly as you would expect. Which means, even if you have never followed the WWE, you can guess more or less exactly where this particular story is going to go. What makes the film go above and beyond is its charming cast. Nick Frost brings more of what we loved from his turns in “Shaun of the Dead” and “Hot Fuzz” as the patriarch of this dysfunctional wrestling family. Jack Lowden jettisons the suave and charm he demonstrated in “Mary Queen of Scots” in favor of a grungier style both in appearance and in how he plays the character of Zak, a passionate wrestler who is lacking the “X-factor” that WWE is looking for in its stars. And Vince Vaughn reminds us that in the right role, he can be very funny. Here, he plays a WWE talent scout and trainer who doesn’t have time to play games or settle for those who lack the drive and desire to make it to WWE.

But it is the women who especially shine here. Lena Headey plays a 180 from her Cersei Lannister in “Game of Thrones,” instead opting for a dyed haired metal fan persona. She and Frost have delightful chemistry as two parents who love their children but maybe, just maybe, love wrestling even more. She’s willing to throw decorum to the wind and go all in on her character’s over the top nature and it’s a blast to see such a normally restrained actress ham it up. And of course, there is Florence Pugh, who continues to offer evidence that she is about to become one of our biggest stars. This cast of misfits works together (along with Merchant’s snappy dialogue) to pound the viewer into submission until they agree to say “ok…that was cute.” Oh, and The Rock is here, but only for about eight minutes, adding up to what is ultimately a glorified cameo.

Beyond the cast and amusing dialogue, the film doesn’t bring much else new to the table aside from an ample share of heart. Stephen Merchant’s direction is technically pedestrian, and the score and cinematography are bland. But everyone’s heart is in the right place. There is a clear message here about toxic masculinity and the sexism long inherent in the WWE. Though those themes may be wrestling specific, there is a universality to the proceedings which will resonate across all audience types. Everything is so well-intentioned, and the cast is so game, you simply can’t resist.

“Fighting with my Family” was far from the most memorable film I saw at Sundance this year. But it is one of the only films that left me with a smile across my face the entire time. Don’t expect daring or innovative filmmaking here. But, like the most rewatchable British comedies, come for the charming ensemble cast and the witty dialogue. It is the best kind of disposable fun that also manages to pack a valuable message. Even though I was hoping for the next “Get Out” with this year’s surprise screening and didn’t get that…or anything close to it. What I got was something better than “The Rock’s new action film.” I got an enjoyable way to spend two hours that, to be honest, I won’t remember in a month.