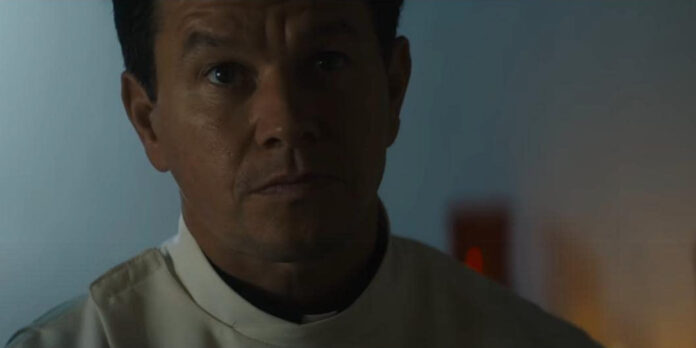 THE STORY – When an injury ends his amateur boxing career, Stuart Long moves to Los Angeles to find money and fame. While scraping by as a supermarket clerk, he meets Carmen, a Sunday school teacher who seems immune to his bad-boy charm. Determined to win her over, the longtime agnostic starts going to church to impress her. However, a motorcycle accident leaves him wondering if he can use his second chance to help others, leading to the surprising realization that he’s meant to be a Catholic priest.
​
THE CAST – Mark Wahlberg, Jacki Weaver & Mel Gibson

​It’s easy to see why Mark Wahlberg would want to tell the story of Stuart “Father Stu” Long and why he would want to play the man himself. Long was a successful amateur boxer who decided to move to LA and become an actor once it became clear that his body wouldn’t allow him to fight anymore. After attending church and getting baptized because of a woman, he survived a horrific motorcycle accident and had a spiritual awakening, dedicating his life to the priesthood. It’s a classic redemption arc, a story of a man who learns how to become a better person through suffering and self-sacrifice. Stu’s Midwestern folksiness allows for ample opportunity for the actor to flex his comedic muscles through the character’s down-home witticisms. There’s also the little matter of Long’s eventual battle with inclusion body myositis (a progressive muscle disorder similar to ALS), adding a layer of physical commitment to the part for Wahlberg to bite into.

Yes, it’s easy to see why Wahlberg would to do this film, and also easy to see why any Hollywood studio would want to produce it: Wahlberg is a pretty bankable star, and Christian-themed movies do pretty well at the box office, often selling out screenings through Church group sales alone. And sure enough, the marketing for “Father Stu” has included an open letter from Wahlberg sent to church groups explaining how he heard of the man, why his story resonated with him, and how inspiring the film is.

What’s a bit impressive about the film, then, is first-time writer-director Rosalind Ross’s straightforward screenplay, in which Stu is constantly questioning the church’s teachings, primarily because they strike him as hypocritical. This comes at least in part from the real-life story, in which the church refused to ordain him as a priest because of his potential inability to perform the sacraments due to his deteriorating physical condition, a decision so plainly discriminatory that it would be mystifying, except that we all know the Catholic Church has done much worse. But the framing of Stu’s questioning of the church, and the atheism/agnosticism of his parents (played by Jacki Weaver and Mel Gibson), is done in a way that feels far more honest than that of typical Christian Cinema, in which Christians are persecuted for their beliefs by mustache-twirling non-believers with ulterior motives. The film shows the Catholic Church as an institution that could perhaps use a little reform and people a little more like Stu.

The problem with the screenplay is that it feels a little too obviously written. While the banter between Stu and his love interest Carmen (Teresa Ruiz) is pleasingly tart, many of the exchanges centered around faith feel more like they come from a textbook than from an actual person. Wahlberg, mustering up all the folksy charm he can, does his best to sell it by speeding through the dialogue like a hungry child rushing through saying grace before a meal. The performances are all committed, although Gibson’s very presence is sure to cause many to roll their eyes. Ruiz is the easy standout of the supporting cast, bringing a spark of life to an underwritten stock character. Cody Fern also makes an impression as a seminary classmate of Stu’s, who looks down on him because of his past.

He comes around in the end, though, and it’s hard not to come around on the film, too. Despite a muddy sound mix causing some of the dialogue to get lost, it’s a pleasant enough watch, and Wahlberg’s charisma carries it even when it starts to drag. But the most important thing is the film’s ultimate message, delivered by the real Father Stu himself, that we should all respect each other as human beings, no matter where we come from, no matter what we’ve done in our past, and no matter what we believe. The film never condescends to its non-Christian characters nor to its audience. It doesn’t proclaim Jesus Christ to be the one true savior but shows reverence for his teachings on how to be a good person. “Father Stu” focuses on one man’s spiritual awakening and how it taught him how to be a better person, with the emphasis always correctly placed on the lesson instead of the path that got him there. It’s a lesson that many religious people in this country would do well to be reminded of, and good on the film for taking this route. Now it’s up to all those church groups the marketing is so aggressively courting to listen.