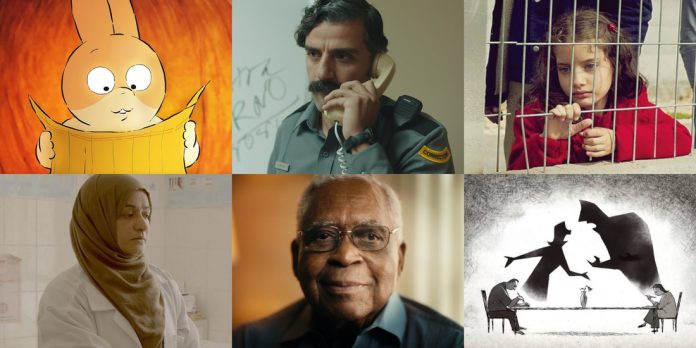 The three Shorts categories are always a bit of a mystery for those of us who follow the Oscars closely. Without distinct precursors and sometimes limited availability, it’s hard to gauge which shorts will find support from the Academy. While I won’t presume to have greater insight into which way the Academy is leaning for these three categories than others, I’m still going to give it a try!

Let’s dive into all fifteen nominated short films and make some educated guesses.

For as much as Disney and Pixar have dominated the Animated Feature category, they don’t necessarily have the same stranglehold on Best Animated Short. That said, a Disney or Pixar short has won every other year since 2012 when “Paperman” glided to a win. Their last win was in 2018 for “Bao,” which puts them right in place to keep the alternating win/loss streak alive. “Burrow” is Pixar’s latest short and was intended to accompany “Soul” in theaters. It’s an adorable 2D animated film about a young rabbit trying to dig an ideal home but keeps encroaching on her neighbors. The hand-drawn animation is lovely and feels like an illustrated children’s book come to life. Directed by Madeline Sharafian, it’s a formidable contender to win the whole thing.

“If Anything Happens I Love You” comes with the power of Netflix behind it – though their attention is understandably divided with higher-profile nominees. It also has the unfortunate power of timeliness. This emotional film follows two parents overcoming a tragic event that changes their family. “If Anything Happens I Love You” is a hand-drawn, abstract animated movie about mass shootings that’s highly effective in a disturbing way. As America has begun to loosen COVID restrictions, we’ve already returned to the all-too-regular occurrence of mass shootings. If voters are watching the film while also seeing the news of shootings across the country, it would be easy to imagine this film winning.

Something that doesn’t play in favor of “If Anything Happens I Love You” is that Animated Short rarely goes to an “issue” movie. More often, they lean toward cuteness than anything. The last winner of this category that could be compared is 2004’s animated documentary, “Ryan,” about animator Ryan Larkin. The film documents Larkin’s struggles with drug and alcohol addiction. If cuteness is the determining factor, “If Anything Happens I Love You” won’t win it.

“Opera,” from former Pixar animator Erick Oh, is easily the most unique of these nominees. Almost playable as a continuous loop, “Opera” looks at a society that exists in a hierarchical pyramid-like structure. The film looks at terrorism, racism, and so much more. It’s impressive; something to be processed and explored. That’s the biggest hurdle for the film: it requires digging in rather than just viewing it. It’s tough for me to imagine most voters going for this, despite it being the most impressive and my personal favorite of the nominees.

“Genius Loci” is a fantastical French film about a woman who begins to see the chaos of a city as a unified whole, coming alive and acting as a guide, as the title suggests. It’s much more abstract than any of the other nominated shorts, both in the story and in its animation style.

Finally, “Yes-People” is an Icelandic short about the struggles of everyday battles, like work, school, and more. Of the eight shortlisted animated shorts that I could see, “Yes-People” was easily my least favorite. The animation is relatively bland, and the story is silly but never really funny. Unfortunately, this one just didn’t work for me.

Of the shortlisted shorts that didn’t make it, I’m most disappointed by the exclusion of “Out,” a really sweet and stunningly animated short from Pixar. I was hoping that it could contend for the win.

Ultimately, this seems to be a battle between “Burrow” and “If Anything Happens I Love You.” Because of this category’s history to lean into the cuteness of the contenders, I’m predicting “Burrow” to win.

Live-Action might be the most complex of these three shorts categories to predict at the moment.

The most recognizable face in this bunch is Oscar Isaac, starring in “The Letter Room,” directed by Elvira Lind, who also happens to be his wife. Isaac stars as a prison officer assigned to the titular letter room, where he’s tasked with sorting through inmates’ mail to search for illegal or inappropriate content. Soon, he becomes involved in an inmate’s personal affairs. It’s an unexpectedly sympathetic role that Isaac does well in, and the short is funny and humane. It’s not my personal favorite of the bunch, but it’s Isaac’s mustache that steals the show.

The star power in “The Letter Room” will likely propel it to the win. Isaac, along with a brief appearance from Alia Shawkat, are the only recognizable faces in any of the five nominated shorts, giving this a significant boost ahead of the competition.

Giving “The Letter Room” a run for its money, though, is “Feeling Through.” Promoted as the first-ever film starring a deafblind actor, “Feeling Through” is a remarkable feat. Late one night in New York City, Tereek encounters Artie, a deafblind man who needs help getting home. What transpires builds a charming connection between the men. It’s a very moving, light-hearted movie that is an undeniable crowd-pleaser. Further, it’s got Academy-Award winner Marlee Matlin as an Executive Producer, and she’s been working the circuit to campaign the film.

Another strong short, “Two Distant Strangers,” benefits from a timely subject matter. A spin on a “Groundhog Day” style time warp, “Two Distant Strangers” finds Carter James reliving the same day over and over again as he tries to walk home one morning. Each morning he’s thwarted by a deadly encounter with a police officer, no matter what he does. Given the climate of the past year, it’s a hard film to ignore. It can be pretty on the nose, but it’s also funnier than you might expect, which helps quite a bit. The film recently landed on Netflix, snagging a spot in its Trending films list.

Two non-English language films also scored nominations: “The Present” and “White Eye.” Only two foreign language shorts won this category in the 2010s, most recently in 2016 with “Sing.” Six such shorts won in the 2000s, so it’s not out of the question for one to triumph here.

Fresh off a BAFTA win, “The Present” is a Palestinian film about a father and daughter in the Israeli-occupied West Bank as they attempt to purchase a present for an anniversary. It’s a frustrating experience for the pair as they’re impeded along the journey. The film effectively brings the emotions out of the viewer, however one-sided as it may be. With a high-profile win under its belt, this could certainly have a shot at winning the whole thing.

Israeli film “White Eye” is presented in one shot as a man finds his stolen bicycle and attempts to retrieve it from the thief. It’s tightly constructed and bleak, though it doesn’t necessarily stick the landing.

The unforgettable “Feeling Through” or BAFTA-winning “The Present” could easily take the win here, without question. Still, for my money, I believe “The Letter Room” will win on star power. It’s a strong film sure to stick in the minds of voters. It’s a close call here, and I wouldn’t be shocked for any of these three to win.

First of all, the snub of “The Speed Cubers” is one of my biggest disappointments of this Oscar season. Go watch it on Netflix immediately!

Composer Kris Bowers has only been scoring films for five years but has made an impact in this short time. Most notably, he scored Best Picture winner “Green Book.” He’s nominated this year for co-directing “A Concerto is a Conversation” alongside Ben Proudfoot. The film centers on conversations between Bowers and his grandfather about family history, legacy, and more. In its 13-minute runtime, it manages to be charming and inspiring while still discussing essential themes of race. There’s even a clip of “Green Book” winning Best Picture. This is the happiest of the nominated shorts and the only one I wouldn’t describe as tragic in some way.

“A Love Song for Latasha” chronicles the life and death of Latasha Harlin, a young Black girl killed in 1991 and whose murder fueled the riots in LA the following year. Mixing animation with home video footage, the film plays out like a cherished and painful memory. The Netflix documentary would be an especially deserving winner for 2020 – poignant and impactful. This category doesn’t often reward films that make extensive use of preexisting footage or mixed mediums. Still, I wouldn’t be surprised if it were able to win the whole thing.

“Hunger Ward” is the most brutal watch on the list but also falls in line with recent winners for the category. The film follows the efforts of hospitals in Yemen fighting child malnutrition due to the ongoing famine. Full of harrowing imagery of children on the brink of starvation, along with bombings and terrorism, it may be too rough of a viewing experience for some voters. Still, it will certainly linger with you long afterward.

“Do Not Split” plays out perhaps in a more straightforward manner than the rest of the nominees, but it’s current, urgent, and important. It’s a boots-on-the-ground style documentary following the extensive protests in Hong Kong over 2019 and 2020. This nomination even prompted the Chinese government to downplay the Oscars and not broadcast the ceremony for the first time in 50 years.

Finally, “Colette” follows a former World War II French Resistance fighter who returns to Germany for the first time in 74 years at the prompting of a young history student. The titular Colette visits the site of the concentration camp where her brother was killed. The film was surprisingly produced for the video game “Medal of Honor: Above and Beyond” as a part of a documentary gallery, making this the first film produced by a video game studio nominated for an Oscar.

It’s difficult to feel confident in any predictions for these three categories since they’re always wild cards. But hopefully, this gives some insight into where the Academy may go this year with the most challenging categories to predict.

Which three films are you predicting to win the Shorts categories? Which nominees were your favorite? Let us know in the comments section below or over on our Twitter account. Be sure to check out our latest Oscar predictions here.