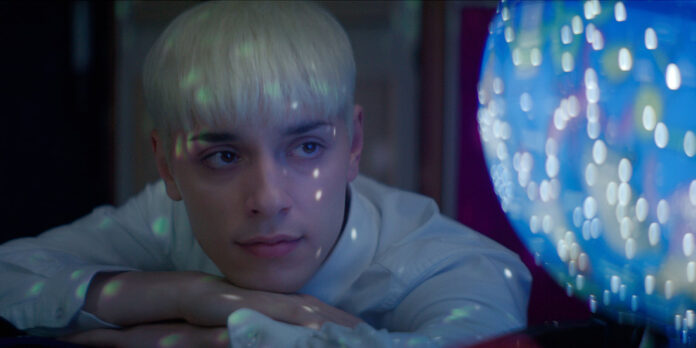 THE STORY – Jamie New is a 16-year-old who doesn’t quite fit in. Instead of pursuing a traditional career, he dreams of becoming a drag queen. Uncertain about his future, Jamie knows one thing for sure — he’s going to be a sensation. Supported by his loving mother and amazing friends, Jamie overcomes discrimination and bullying to step out of the darkness — and into the spotlight.

​​​​​​In 2011, BBC 3 aired the documentary programme “Jamie: Drag Queen at 16”, about a high school boy who wanted to be a drag queen and was determined to wear a dress to prom. In 2017, the musical “Everybody’s Talking About Jamie,” based on the documentary, opened on London’s West End. It was still running before theaters shutting down for the pandemic (it is scheduled to make a full return in 2022). And now, in 2021, the musical has been turned into a film, and is coming to a (home) theater near you, thanks to the show’s original director Jonathan Butterell (and Amazon Prime). Jamie’s story is one that speaks to today’s youth and their parents equally well, with a universal story about finding the power within yourself to express your deepest self to the world, told through an effortlessly catchy pop score.

Jamie New (newcomer Max Harwood) is an openly gay sixteen-year-old in the working-class town of Sheffield. His mom (Sarah Lancashire) loves him dearly, but his dad (Ralph Ineson) is all but out of the picture. When teacher Miss Hedge asks Jamie’s careers class what their professional goals are, she attempts to encourage them to pick traditionally solid careers like Jamie’s best friend Pritti (Lauren Patel), who wants to be a doctor. But Jamie has his heart set on being a drag queen, although he can only tell his classmates in a fantasy musical sequence. He’s been saving money from his paper route to buy a pair of red sequined high heels, and getting them gives him the push he needs to go to the local drag shop to put together the rest of the outfit. There he meets Hugo Battersby (Richard E. Grant), who sees a kindred spirit in Jamie and agrees to be his mentor and gets Jamie his first gig. But how will Jamie’s classmates react when they see him in a wig, a dress, and high heels? And will he even be allowed to attend prom in drag as he wants?

If nothing else, “Everybody’s Talking About Jamie” knows its audience: Young people who hate school and love pop songs, and maybe their parents, too. Butterell has his finger on the pulse well enough and stages each musical number in a different style, largely reminiscent of famous music videos. He and writer/composers Tom MacRae and Dan Gillespie Sells have made smart choices in adapting the show’s score to film, cutting extraneous songs, and changing some things around for better dramatic effect. They’ve also included one new song for Hugo, “This Was Me,” that gives him a richer backstory at the same time as he provides Jamie (and the audience) an important lesson in gay history, told through old home movies of his performing days in the late ’80s, as the drag queen Loco Chanel.

The script treats Jamie’s story with the utmost care, letting him explain what it means to him to want to be a drag queen, and even gives him a few touching moments where he realizes that being a drag queen is so much more than acting fierce in a pretty dress, and questions if he has what it takes to really do this. Harwood’s lack of experience in front of the camera does come through every once in a while, but he gets that at this point in time, Jamie mainly exists as a performance; he knows what he likes but isn’t sure who he is yet, and puts on a lot of extra fierceness to cover for that. But while the script gives Harwood plenty to work with, it lets down the supporting cast, relegating both Pritti and Hugo to glorified “magical minority” roles: They are just sidekicks, there to teach Jamie the lessons he needs to learn to grow up and become his best self. It’s incredibly disappointing that Pritti seems to have no life of her own outside of Jamie since Patel is so sweetly appealing, and the opportunity to give her a parallel arc to Jamie’s is so rich. But outside of one moment where she stands up to the school bully, she gets nothing. Hugo disappears for the entire last act of the film, a disservice to Grant’s tremendously fun performance and Hugo’s self-appointed role as Jamie’s mentor.

And yet, for all that “Everybody’s Talking About Jamie” might not be the very best version of itself, it is still a fun watch. A feeling of joy radiates off it, most notably in the catchy musical numbers, but even in the film’s more quiet introspective moments. It’s hard not to smile through your tears as Jamie’s mom sings about how she loves her son even when she doesn’t understand him or when Pritti passionately tells Jamie how beautiful it is that he brings some glitter to their grey world. These moments are also just restrained enough to not come across as cloying and emotionally manipulative, a neat trick that the Brits seem to have perfected. Everything that musicals need to do well, “Everybody’s Talking About Jamie” does well: It’s fleet on its feet, it has hummable tunes, a talented cast gives it their all, and highly stylized moments are used sparingly. Most importantly, the film entertains without pushing too hard (like last year’s insistently gaudy “The Prom” did). It’s a pity that it doesn’t go further and do more with the material, but it feels churlish to complain when the end product is this enjoyable and moving. In the end, “Everybody’s Talking About Jamie” is a delight, one that will inspire young LGBTQ people to find and express their inner fabulosity for years to come.