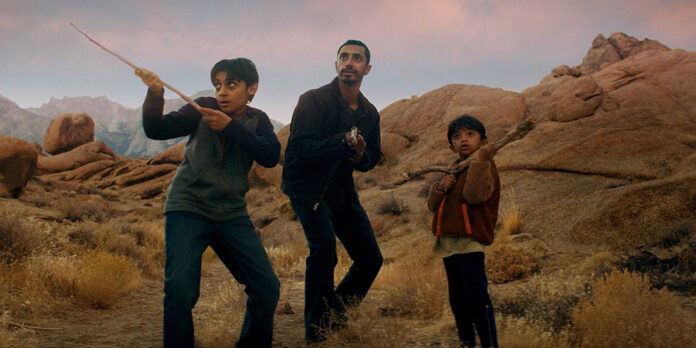 THE STORY – Two brothers embark on a journey with their father, who is trying to protect them from an alien threat.

When Michael Pearce first burst onto the scene with 2017’s blistering psychological drama “Beast,” the film – which was nominated for Best British Film at the 72nd BAFTAs and won Outstanding Debut by a British Writer, Director or Producer – demonstrated that Pearce was a director to keep our eye on, especially in the thriller space. While we’ve had to wait four long years for his follow-up, the excellent “Encounter” was certainly worth it, as it represents yet another brilliant, genre-blending adventure from the burgeoning auteur, led by a reliably riveting turn from Riz Ahmed.

“Encounter” opens on the anxious Malik Khan (Ahmed), a decorated former Marine who quickly becomes convinced that Earth is amidst an alien invasion. Why does no one else seem alarmed? Well, that’s because the “aliens” in question are bugs, according to Khan – bugs who surreptitiously seize control of people seemingly in mere seconds, and only Malik can see them or sense when someone has been “infected.” When he comes to believe that one such “infected” being is his ex-wife, Piya (Janina Gavankar), he sets off to rescue his sons Jay (Lucian-River Chauhan) and Bobby (Aditya Geddada), subsequently taking off on a road trip where he reconnects with the two and teaches them to fend for themselves against these quickly advancing aliens.

What makes “Encounter” so special is how it takes this conventional sci-fi set-up and completely turns it on its head, slowly revealing that what we think we’ve been watching is another movie entirely – one far more riveting and emotionally resonant. From the start, we should’ve known that Pearce wouldn’t make something so simple and straightforward, but it’s the specific story choices he makes that stun most of all. Even when you start to catch on, he always finds a way to throw another curveball, with constant thrills coming in the form of car chases and frenetic gunfights (all accompanied by stunningly integrated sound work). However, despite all these twists and turns, Pearce keeps a consistent theme throughout, centered on the committed bond between father and son and how this connection can combat even the most fiercest antagonistic forces.

As such, the chemistry between Ahmed, Chauhan, and Geddada is the foundation of the film, with Ahmed and Chauhan carrying the most moving scenes with strength and sincerity. Ahmed continues to show that there’s no limit to his range as an actor. His work as the uneasy and potentially unhinged Malik is one of his finest turns to date, particularly as he effectively evolves in the role when more layers to his puzzling personality come to light. It’s no easy part to pull off – especially as we’re supposed to still empathize with this character regardless of some of his more shocking actions – but Ahmed is so ferociously committed that we can’t help but feel for him, no matter his faults. The way Chauhan’s Jay views his father also aids our appreciation for Malik, as he regards him with such unflinching reverence that it’s hard to imagine how a man this loved by his child could do any wrong.

However, Chauhan simultaneously sells his skepticism of his dad’s beliefs splendidly as it becomes clear that his claims of extraterrestrial terrors aren’t all they’re cracked up to be. Chauhan conveys a wisdom beyond his years when reconciling with the fact that his role model may not be as pure as he once presumed, and in a way, he has to take on the role of “parent” when his father fights against mental ailments far more fearsome than any alien. Octavia Spencer also stands out in a crucial supporting role as a character tasked with keeping Malik safe – and, by extension, his children, when his paranoid delusions put them in harm’s way. Spencer’s storyline runs congruent to Ahmed, Chauhan, and Geddada’s, but Pearce weaves them together wonderfully, assuring that each plot’s highs and lows align. Sometimes, the latter can feel a bit episodic – mainly when it seems like the story is spinning its wheels until the boys and Spencer’s Hattie collide – and the ultimate resolution is a bit underwhelming and abrupt. Still, the emotions inherited in this small-scale familial epic are so stirring that it’s hard not to be swept up in the sentiment anyway.

All-in-all, “Encounter” may not be quite as cohesive a chronicle as “Beast.” Still, Michael Pearce’s sophomore feature is a suspenseful little success, all the same. Starting as a stereotypical sci-fi-tinged indie and quickly morphing into an unexpectedly moving family drama, it’s strengthened by strong acting work across the board from Riz Ahmed, Lucian-River Chauhan, and Octavia Spencer. After avoiding the dreaded sophomore slump, here’s hoping it doesn’t take four more years for us to be blessed with another Michael Pearce original, as his vibrant voice is a breath of fresh air in the world of genre filmmaking.