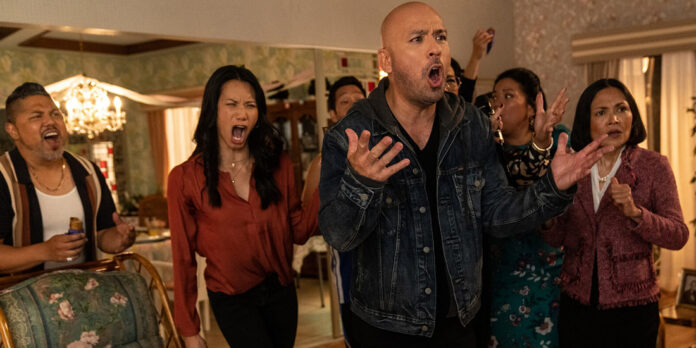 ​Nothing is universally funny. You can try to come up with exceptions all you want, but everything you think is funny to everyone is going to be a turn-off to at least one person. This is partially why pure comedies rarely get Oscar nominations – it’s very difficult to make something funny enough to a broad enough range of people to achieve that honor.

Filipinos are high up on the list when it comes to minority groups in America who deserve to see themselves and their culture represented on screen in a major motion picture distributed by a major studio. Arguably the most famous Filipino star, Lou Diamond Phillips, spent most of his career playing characters from other backgrounds, like Ritchie Valens in “La Bamba,” whose heritage was Mexican. It is long past time to get real Filipino representation in the movies, and for that reason alone, “Easter Sunday” deserves to exist and deserves to be seen. Unfortunately, it’s nowhere near as good as it should be to recommend it wholeheartedly.

Joe Valencia (Jo Koy) is finally in the running for a supporting role on a sitcom after years of trying to make it as a stand-up comic and actor in LA (and to not be primarily remembered as the guy from that beer commercial with the incredibly lame catchphrase). Unfortunately, the time he has to spend focusing on his career has pushed his son (Brandon Wardell) away, literally: Junior lives with his mom (Carly Pope) and her new beau (Michael Weaver), and he’s not doing well in school. But despite the five-hour road trip, Junior is excited to visit Joe’s family in Daly City for Easter. Once there, the typical family hijinks ensue: Mom (Lydia Gaston) and Aunt Theresa (Tia Carrere) are fighting, nobody knows why, and the family expects Joe to fix it. Cousin Eugene (Eugene Cordero) is in need of more money for his “hype truck,” which Joe invested in thinking it was a taco truck but has since turned into something else, and now Eugene’s debts are coming due, and it falls on Joe to fix it. And everybody thinks that Joe booked the sitcom, but he’s actually fighting with his agent over the network’s demands that he do a Filipino accent. To put it mildly, there’s a lot on Joe’s shoulders.

The same could be said of Koy, a stand-up comedian playing the lead in a feature film for the first time. While he didn’t write “Easter Sunday,” the idea came from him, and Koy’s stand-up heavily influenced writers Kate Angelo and Ken Cheng. As with most comedians making the transition to screen acting, he’s not the most natural actor. Outside of a few scenes where he just performs a stand-up routine, he lacks the charisma a leading man needs to hold a project together. Thankfully, he has a whole ensemble of seasoned performers surrounding him to lift some of the burden. Gaston and Carrere are having the time of their lives playing the cartoonishly feuding sisters, Cordero is an incredibly endearing goofball screwup, and Eva Noblezada and Tiffany Haddish provide just the right amount of sugar and spice to the proceedings, respectively, as a love interest for Junior and a cop who dated Joe back in high school.

Unfortunately, while they all perform it with gusto, the script just doesn’t give them good material to work with. The culturally-specific material feels so ironed out that it feels more generic than culturally-specific (most mothers admonish their children for not calling or visiting enough, not just Filipinos!), and even the good jokes reek of low-hanging fruit (Hollywood agents are assholes!). The rest are so average that they need pros like this even to have a chance of working. And the cast does put over a good amount of the jokes. Most of them are easy laughs, but the entire ensemble is committed to wringing as much humor as possible out of this thing, and they almost save it. Almost. They cannot save the filmmaking, which is painfully average when it isn’t an outright disaster. The editing is a mess, the score is Generic Hollywood Comedy 101, and the cinematography is just functional enough to get by. Many will say that the basics of cinematic technique don’t matter so much when a comedy makes you laugh, but when it doesn’t make you laugh, problems like these become even more apparent and difficult to ignore.

And here’s where this review takes a turn. Because with an audience that is ready to be entertained and glad to see themselves up on the screen, “Easter Sunday” plays. Hearing an audience laugh with the film because they see themselves and their families onscreen makes everything feel slightly less terrible. It’s still not a good movie, but it has a kind of laidback, familial vibe to it that is quite appealing. It’s clear that everyone involved was coming from a place of love while making the film, and watching it with a good audience enhances that familial feeling. That’s a perfect feeling for a movie about family and the importance of seeing things from another person’s perspective. It’s incredibly important that “Easter Sunday” was made, and the people for whom it was made deserve to enjoy it. Those people absolutely deserve a film that is better than something this bland and poorly filmed, but if you’re in an audience with enough of them, you’ll feel like a member of the family.