“DORA AND THE LOST CITY OF GOLD” 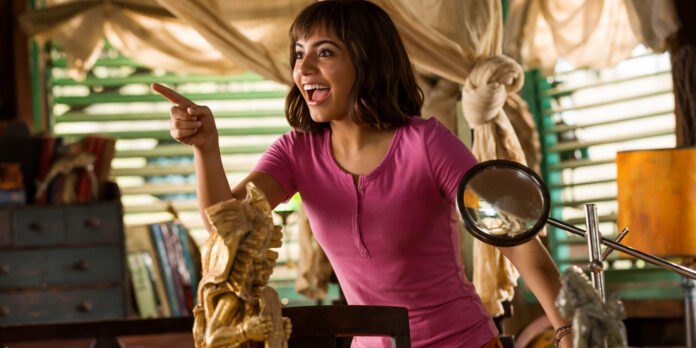 THE STORY – Having spent most of her life exploring the jungle, nothing could prepare Dora for her most dangerous adventure yet — high school. Accompanied by a ragtag group of teens and Boots the monkey, Dora embarks on a quest to save her parents while trying to solve the seemingly impossible mystery behind a lost Incan civilization.
​
THE CAST – Isabela Moner, Eugenio Derbez, Michael Peña, Eva Longoria & Danny Trejo

​​Young Dora lives with her explorer parents in the South American jungle. She is constantly going on imagined adventures with her cousin Diego and pet monkey Boots. But then Diego gets sent back to “the city” to live with his parents, and Dora spends ten years more or less on her own, making friends of the jungle animals and amusing herself by describing them to no one in particular. She wants to be an explorer like her parents, but when she happens upon an artifact that leads them to believe they can find the legendary Parapata, a lost Incan civilization located deep in the jungle, her parents send her to join Diego in the city for her own safety. Her cheerful demeanor, fearlessness, and odd ways make high school difficult, but before she can deal with that, she has to deal with getting kidnapped – along with Diego and two classmates – by a group of mercenary treasure hunters trying to find her parents, and the treasure in Parapata.

Based on the animated educational series “Dora the Explorer”, the plot of “Dora and the Lost City of Gold” is standard-issue kiddie adventure stuff. But like its titular heroine, the film’s cheerful good nature makes it pretty darn irresistible. James Bobin’s film lets you know right off the bat the tone it will be operating in, with a fun run through the jungle with young Dora and Diego that feels like a perfect live-action reimagining of the animated series – talking backpack, map, monkey, and all – only to eventually reveal that all this is a child’s fantasy game. The playfulness of the sequence invites everyone to relax and have a good time: This isn’t exactly the version of Dora we all know, but it has the same spirit that made the TV series so beloved.

That spirit is, broadly, one of inclusion, of being open to everyone and everything around you, even if it is different, or weird, or scary. Nicholas Stoller and Matthew Robinson’s screenplay (from a story by Stoller and Tom Wheeler) makes a point of including every potential audience member in the fun. This isn’t one of those movies for kids where the creators felt the need to put in some jokes specifically for adults that go over kids’ heads. Rather, this is a film that understands that a good joke is a good joke, period. So, yes, there is one scene that is an extended fart joke, but the scene is more about the characters laughing at each other for their cheesy fart jokes, rather than just a fart joke for the sake of a fart joke. “Dora and the Lost City of Gold” is smart about how it plays to its family audience. It never panders to anyone, which makes the film even easier to enjoy.

Of course, this is still very much a film with an audience of kids in mind, so some concessions must be made. So yes, the characters are paper-thin stereotypes written in broad strokes, and the plot glosses over or avoids any true danger or conflict, and there are two CGI animals that never feel quite real (even within the live-action-cartoon world of the film), and the whole thing ends with an original song that includes the lyric “We came together, that’s the real treasure.” But despite all that, the cast makes it work. Their combined charm offensive proves impossible to resist, especially Isabela Moner as Dora. It’s difficult to carry an entire film on your shoulders, not to mention playing a perpetually upbeat optimist without coming across as annoying, but Moner manages both with ease. She is incredibly winning, making her teenage Dora feel like a natural progression from the cartoon seven-year-old without ever feeling cartoonish.

“Dora and the Lost City of Gold” could have been an easy, callow cash grab. It could have leaned heavily on nostalgia for the television program that spawned it without creating an identity of its own. It could have gone wrong in any number of ways, but, in the best surprise of the Summer of 2019, it didn’t. This is a film that decided to go about the business of being a good movie first and foremost. It is a film that wants to entertain all members of its audience equally and does so by treating people of all ages with respect. It may be light and breezy, but it goes by so fleetly that it entertains almost effortlessly. Can you say “family entertainment of the highest order?”