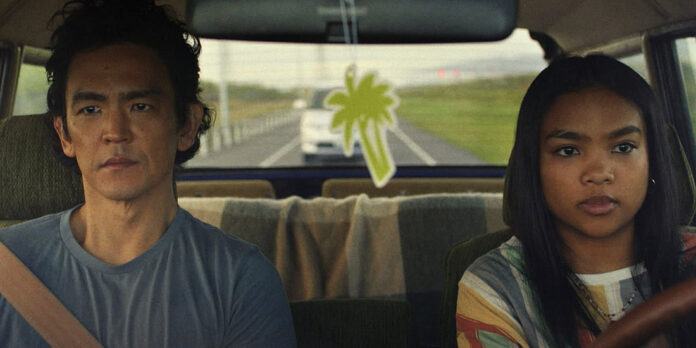 THE STORY – A terminally ill man and his teenage daughter embark on a road trip from California to New Orleans for his 20th college reunion. While there, he secretly hopes she can reunite with the mother who left them long ago.​

​​​​​​​​​It’s a very strange experience to have your opinion of a film completely change solely based on how it ends. And yet that is what one experiences when watching “Don’t Make Me Go,” a standard-issue indie road trip drama with two endearing performances that ends on a note so obviously wrongheaded that the film must open with a warning: “You’re not gonna like the way this story ends,” begins the film’s voiceover narration from young Wally Park (Mia Isaac), a mixed-race teen whose mother left her and her overprotective father Max (John Cho) years ago (for his best friend). But now Max has been diagnosed with terminal cancer, and since he doesn’t want to leave his daughter alone, he decides to bring her on an end-of-summer-break road trip to his high school reunion in the hopes of getting his ex-wife to take her when he dies. Not that he tells Wally any of this, instead enticing her to join him by dangling the prospect of driving lessons in front of her.

While the filmmaking on display in Hannah Marks’s film is perfectly fine. The slightly-desaturated color palette isn’t exactly pretty, but the shot compositions are nice, and the use of shadow is often striking. The editing moves things along at a decent pace, helped by some choice needle drops on the soundtrack. But what really lifts “Don’t Make Me Go” (for the first 95% of its runtime) are the central performances. Cho and Isaac have fantastic odd-couple father-daughter chemistry and clearly delineate the fact that they deeply love each other from the fact that they’re going through a difficult patch at the moment. Isaac ably charts Wally’s growing self-confidence in a wonderful debut performance. The script approaches the subject of teen sexuality with great care, and it’s lovely to watch a young woman navigate the tangled web of societal pressures, expectations of friends and parents, and her own internal comfort levels in a way that feels true to life. Cho is stuck with a much less interesting part to play, but he does well charting Max’s growing acceptance of his health situation and ability to take ownership over his life, even if he doesn’t have much of it left. He’s helped by having fantastic scene partners – not just Isaac, but Kaya Scodelario as Max’s favorite booty call, and Jen Van Epps and Jemaine Clement in what amount to cameos as his ex-wife and ex-best friend. The most impressive part of Cho’s performance is in his perceptive portrayal of how Max becomes a slightly different version of himself depending on who he’s with, only showing certain parts of himself to certain people. The screenplay even does right by every single one of its characters in the emotional confrontations that happen when Max inevitably comes clean about his diagnosis, not letting anyone (including Max) off the hook and giving real weight to each stage of grief the characters move through as they reckon with the news.

If the film isn’t exactly breaking new ground, at least it has a good grasp on its characters, as well as the performances to lift the film whenever it becomes too seen-it-all-before. But then, in the home stretch, Vera Herbert’s screenplay stumbles so spectacularly that it squanders all the goodwill the film has accumulated up to that point. In what feels like nothing so much as an act of desperation to give this standard indie drama something that feels unexpected, it throws away over an hour and a half of strong character work to spring a twist on its unsuspecting audience. Whether or not the twist works will vary from person to person, but dear reader, I beg you: Do not fall for it. All films are emotionally manipulative by their very nature, but the best ones do it subtly, without calling attention to what they’re doing. The ending of “Don’t Make Me Go” is an act of emotional manipulation so blatant and shameless that it is an insult to the audience that has invested its time and attention into the film. We’ve seen this type of story many times before, and it’s not incredibly difficult to get right.

Before the final 5-10 minutes, “Don’t Make Me Go” gets it right enough that you’re willing to overlook its faults. But the ending, and the way it is presented, shows such contempt for the audience that it is bewildering. It is clear that everyone involved thought that they were doing something meaningful and moving, and perhaps some viewers will buy into that. But again, dear reader, I beg of you: Do not fall for it. Be better than this film. Demand better from the films that you watch. You deserve better than this naked ploy for tears that, in actuality, is an insult to not just your intelligence but the intelligence of the characters the film so desperately wants us to feel for.