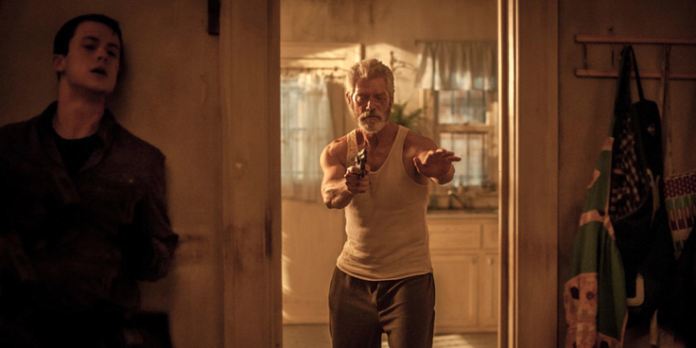 THE STORY – Rocky (Jane Levy), Alex and Money are three Detroit thieves who get their kicks by breaking into the houses of wealthy people. Money gets word about a blind veteran who won a major cash settlement following the death of his only child. Figuring he’s an easy target, the trio invades the man’s secluded home in an abandoned neighborhood. Finding themselves trapped inside, the young intruders must fight for their lives after making a shocking discovery about their supposedly helpless victim.

When Fede Alvarez released his directorial debut which happened to be a remake of Sam Rami’s classic B-horror film “The Evil Dead,” I quite enjoyed it for what it was: an over the top gore film. “The Evil Dead” lacked the same level of humor which Sam Rami went on to go and perfect in his following films but what Fede Alvarez does with “Don’t Breathe” is he ups the ante by not relying on over the top gore, but instead trades it in for over the top dread. In fact, he approaches Sam Rami’s style closer than ever with this trade off as the levels of suspense, terror and dread get so ridiculously high that you can’t help but grin ear to ear as the characters in “Don’t Breathe” struggle to survive through the night with the scariest blind man we have seen in cinema in quite some time.
​
​Rocky (Jane Levy), Alex (Dylan Minnette) and Money (Daniel Zovatto) are three young friends living in Detroit Michigan with dreams of escaping their poor neighborhoods for a better life. To do this, the trio breaks into people’s houses and steals their possessions for money. They are careful about what and what not to take and the risk factors associated with each break in. Money has the idea for the three to rob a blind man’s home which is rumored to hold hundreds of thousands of dollars in it from a settlement he received when his only daughter was killed. This is to be their final job but what the three don’t plan on is how prepared the former army veteran is for a home invasion as the three become trapped in the house with the very strong, capable, horrifying and supposedly helpless blind man.

“Don’t Breathe” is a lean film clocking in at 88 minutes and does not let up on the anxiety and jump scares once it hits the ground running after about 15 minutes into the film. It’s also not an overly complex affair as the story is simple enough to have proper character motivations and relationships also all properly set up within the first act. There is something about “Don’t Breathe” which places it above most other horror movies of the year and the answer is the style and care which director/writer Fede Alvarez packs into every frame of his film. The sound work, which is so integral to the success of this film is extraordinarily well crafted and unnerving in its tension. The film is also shot very well and edited down to its bare essentials ensuring that the horror does not overstay its welcome. Some may argue that Alvarez goes a little too overboard in the third act of the film where the audience starts to wonder if he will ever let them have a chance to breathe. They just have to take a moment to realize that the whole point of the movie is not breathe, thus the title. I would say in that regard, Alvarez succeeds.

The acting by the film’s four characters is nothing new or groundbreaking but Stephen Lang certainly makes for one terrifying antagonist and it is nice to see Jane Levy re-team with Alvarez in a much different role than her previous collaboration with him as Mia in “The Evil Dead” remake. The writing is trashy without any depth but the character motivations and relationships are clear. There are also a few twists and surprises towards the end of the film which will have you second guessing if Alvarez is going to let his characters escape from the heavily guarded house alive or not. Once again, it’s his degree of control over the material and how he executes it which is most impressive.

While “The Witch” still takes the title as the best all around horror movie for 2016 (And beyond that) for me, “Don’t Breathe” is the best B-movie horror film I’ve seen this year with an extremely talented writer/director controlling every emotion and moment with precision and vision. It may get a tad bit overbearing for some in its final act and don’t go in expecting any kind of multiple interpretations or weightiness from its script, but “Don’t Breathe” is a great example of horror done well. I myself had trouble breathing many times throughout the film as Alvarez builds the tension, releases the suspense with perfectly executed jump scares , then ups the stakes again and again until you’re left grasping for air. Don’t be blind and see “Don’t Breathe.”