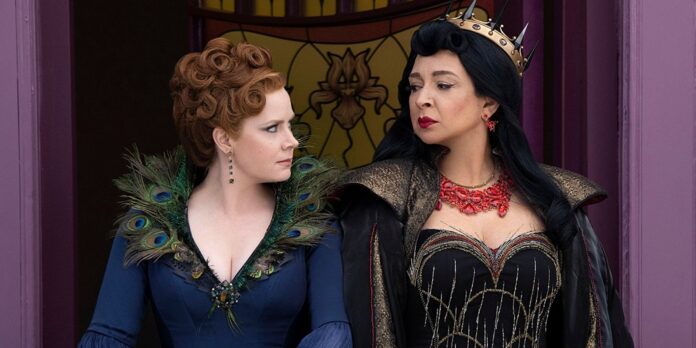 THE STORY – Years after her happily ever after, Giselle, Robert and Morgan move to a new community and Andalasia and the real world are thrown off-balance.

Gather ’round, folks! It’s time for your biweekly dose of nostalgia-drenched media. The latest piece of throwback entertainment that’s tumbled onto a streaming service is “Disenchanted,” the long-awaited sequel to the beloved 2007 film “Enchanted.” All of our favorite characters are back for a decidedly less sharp and more bland musical adventure. The cast is game, and the story features a smart character choice for Amy Adams that allows her to shine, but this is a disappointingly unmagical sequel that lives up to its dour title.

After nearly two decades of what appears to be a mostly blissful marriage, Giselle (Adams) seeks to bring more magical elements to the lives of herself, her husband Robert (Patrick Dempsey), her teenage stepdaughter Morgan (Gabriella Baldacchino), and the couple’s newborn baby. After all, she was a would-be princess in the animated world of Andalasia who was thrust into mid-2000s New York City against her will. Her solution? To move from the hustle and bustle of Manhattan to the more relaxed suburb of Monroeville. But a change of location doesn’t instantly make her family’s life better. As a last resort, Giselle uses an Andalasian magic wand to transform the real world into a true fairy tale. And while at first, this seems like the perfect melding of her old and new worlds, things quickly get complicated, and Giselle must do all she can to change the world back.

Without a doubt, the most critical element that made the first film such a success was Adams’s performance. The way she can bring a literal fairy tale character to life and, rather than it being an annoying or one-note performance, can bring weight and endless charm to her portrayal in “Enchanted” is nothing short of miraculous. At the time, she was less well-known to general audiences. Still, cinephiles would recognize her from her Oscar-nominated turn as a perpetually sunny and incredibly pregnant young woman in “Junebug.” Based on that film, it’s easy to see why she would be cast as a real-life Disney princess. “Enchanted” proved to be her mainstream breakthrough, and ever since then, she’s gone on to rack up an additional five Academy Award nominations (although she was unfairly snubbed for “Enchanted”).

In the years between the previous film and “Disenchanted,” she’s portrayed damaged characters who often hide their inner pain under a hardened or distant exterior. Her work in “Arrival,” “The Master,” “American Hustle,” “The Woman in the Window,” and TV’s “Sharp Objects,” among others, prove that she excels in playing these types of broken individuals. It’s a leap for her to return to the sing-songy character of Giselle, as audiences haven’t seen her be cheery in quite a while. Luckily, Adams is more than up to the task, delivering a winning performance. Most notably, Giselle gets the chance to be surprisingly sinister thanks to a clever plot device. This allows Adams to tap into some of the darker areas of her acting abilities. Just like in “Enchanted,” she’s the bolt of lightning that gives the film life.

Adams isn’t alone in her committed work. Maya Rudolph is, unsurprisingly, delicious as the vain villain, playing a combination of Snow White’s Evil Queen and the most annoying mom in the PTA. Her duet with Adams entitled “Badder” is by far the musical highlight of the film. The pair sell the one-upping nature of the song with their charisma and impeccable singing abilities. Idina Menzel is given two songs, perhaps to make up for her character not doing any singing in the first film. Shocking no one, she gets the climactic power ballad “Love Power,” a very Elsa-like number where she gets to belt to her heart and throat’s desire. And as the wistful teenager Morgan, Gabriella Baldacchino gets the chance to show off her acting and vocal range to impressive results.

Unfortunately, these admirable performances are in favor of a flat, uninspired screenplay. “Enchanted” was a smart combination of fairy tale magic and real-world cynicism that balanced itself out nicely. While it’s a send-up of Disney animated film tropes, it equally adores and playfully ridicules the studio’s famous princess films. In fact, it was a few years ahead of the trend of self-aware blockbusters that now dominate the film landscape. “Disenchanted,” however, isn’t as clever in its knowingness. Instead, once the characters’ world is transformed into a fairy tale, it becomes a standard story of love overcoming adversity and saving the day. It even leads to a climactic battle featuring the types of vague magical power beams and portals to other dimensions that Disney has seemingly made a contractual requirement for all of its movies and TV shows, from “Loki” to “Hocus Pocus 2.” And the technical elements used to bring these otherworldly creations to life are decidedly lacking. The visual effects team was clearly given a TV movie-level budget as opposed to a major film – somewhat shockingly, the CGI was more impressive in the 15-year-old “Enchanted.”

A collection of compelling performances isn’t enough to compensate for the film’s lesser qualities. Part of what makes “Enchanted” work so well is its combination of yesterday’s fairy tale logic with the energy and realism of the present day. “Disenchanted” is content to revel in the palatable, morally bland story beats that Disney has trademarked over the past few years. In that way, “Disenchanted” is a sequel featuring the same characters and basic premise as the original, but none of the heart and spirit. A constantly sung refrain in the film reiterates that this will be “even more enchanted,” as if the filmmakers are trying to conjure enjoyment out of the audience without putting in the work to deliver something truly magical.

<b>THE GOOD - </b>Amy Adams gives a magical performance that allows her to tap into both the sunny nature of her work in the original "Enchanted" and, surprisingly, the darker elements of her more recent, grounded movie characters.<br><br> <b>THE BAD - </b>The screenplay lacks the bite and cleverness of the original, instead devolving into a standard, modern-day Disney film about the power of love and other palatable narrative tropes.<br><br> <b>THE OSCAR PROSPECTS - </b>None<br><br> <b>THE FINAL SCORE - </b>5/10<br><br>"DISENCHANTED"