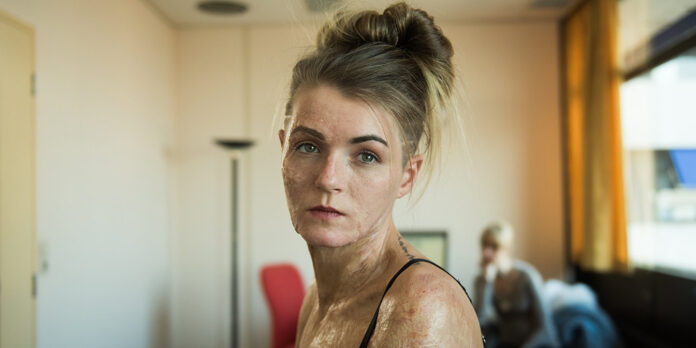 THE STORY – Following a violent acid attack that left many scars, Jade, a young mother from London, attempts to reclaim her life and some sense of normality.

​The success of any film, no matter how wide the scope or complex the structure, almost always comes down to the strength of its story. Within that framework, it also becomes important to establish well-rounded characters that establish an authentic emotional journey to witness. Many great works that take a deeply resonant character study and mine that potential for intriguing and affecting exploration. While there is no doubt that “Dirty God” looks to do just that, it ultimately comes up short despite a strong central performance at its core.

The film revolves around a young woman named Jade (Vicky Knight), who is recovering from an acid attack perpetrated by a former lover that has left a great deal of her face and body permanently scarred. She returns to her lower-class life where she lives with her mother (Katherine Kelly) and infant daughter. However, picking up the pieces of her life is not a simple proposition. As she attempts to return to some sense of domestic normalcy, the mental trauma continues to haunt her. Emboldened by a plan to travel abroad to receive new surgeries, Jade hopes to finally find the peace in her life that will stop her emotional state from spiraling out of control.

As previously stated, the strength of a film like this relies heavily on the power of its character study. This ultimately means that the center performance has to be engaging enough to sustain all the other elements. Fortunately, Knight proves more than capable of delivering an effective performance. In her acting debut, she conveys all the frustration and anguishes her character has to endure without coming across as inauthentic. One could assume Knight’s personal struggles have a great influence on her performance (most of the scars are the real result of a fire she survived as a child), but there is a deep sense of empathy that she is able to convey. Her portrayal is moving and a wonderful presentation of a broken soul trying to find solace in an unforgiving world.

There is also a great deal in the filmmaking that is impressive, if not also irregular in terms of its exceptionalism. Sacha Polak has an approach to crafting this story that is methodical yet often stylish. Many scenes will indulge in dramatic lighting changes, colorful cinematography and experimental choices that add a flourish to the imagery and creates a dynamic presentation. Unfortunately, these choices are not consistent throughout the film and are often distracting from the overall narrative. Apart from these sparse moments, the direction comes across as adequate if not completely revolutionary save for a handful of instances.

Where the film mostly struggles is in its screenplay written by Polak and Susanne Farrell. Its attempt to create an earnest character study ends up resulting in a tedious and laborious tale without much momentum propelling the story forward. Most of its observations are blunt and unsophisticated, and it translates to an aimless plot with little depth in its thematic examination. It also creates a sea of mostly uninteresting and shallow peripheral characters who struggle to make an impact. The only one who does is Jade’s mother, but that is more due to Kelly’s endearing performance than anything on the page. It’s a shame that the most important foundational element of the film is the weakest part because it ends up detracting from the effectiveness of other performances and contributes to the arduous pace.

Much of “Dirty God” ends up providing a rather languid exploration of looking into the life of a troubled young woman that sadly is nowhere near as compelling as the performance it is built around. Despite some interesting decisions made behind the camera to create an alluring atmosphere, most of the film’s filmmaking is fairly banal and weighed down immensely by a script that does not craft an engaging story or complex characters. However, the performance from Vicky Knight saves much of what’s on display as she manages to convey a much more nuanced and authentic presentation than the material affords her. In the end, this particular character study may be a flawed portrait, but at least its main subject finds ways to be somewhat captivating.