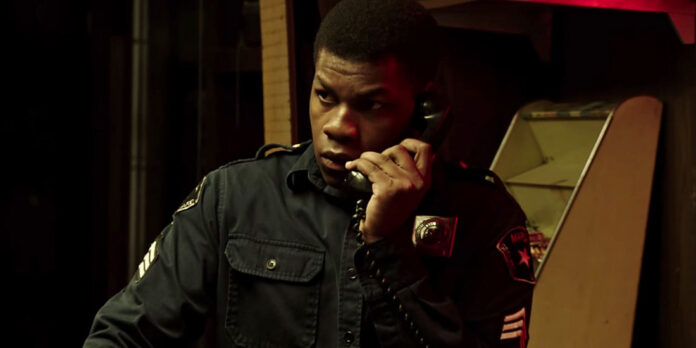 THE STORY – Police and the military spring into action when rioting and civil unrest rocks Detroit during the summer of 1967.

​The combined filmmaking abilities of Director Kathryn Bigelow and screenwriter Mark Boal have done it again. After the Academy Award winning “The Hurt Locker” and the critically acclaimed “Zero Dark Thirty,” the two have re-teamed up again to tell the harrowing true story of the 1967 Detroit riots in “Detroit.” The result is a film that is the weakest of the three in terms of its bloated runtime and scattered storytelling but when the film has its peak moments, it’s easily one of the best films of the year. Not only does it look to the past in an effort to comment on the atrocities still being committed today but it manages to tell a complex story on both a macro and micro level with commanding skill and respect.

Told through many points of view, “Detroit” depicts the infamous Detroit riots of 1967 sparked by police brutality mostly on the African American communities within the state. As the rioting continues to grow, bandmates Larry (Algee Smith) and Fred (Jacob Latimore) find themselves at the Algiers Hotel on July 25th, 1967. There they meet two women (Hannah Murray and Kaitlyn Dever) who introduce them to a few others (Jason Mitchell, Anthony Mackie, and a few others). Upset at the police brutality, Carl (Jason Mitchell) fires a shot out his window with a toy pistol sparking an intense response from the military and police personnel. Afraid that there is a sniper within the hotel, police officer Phillip Kraus (Will Poulter) takes charge of the raid on the hotel with hateful, racist and brutal methods. A nearby security guard named Melvin Dismukes (John Boyega) does his best to diffuse the situation as the tension begins to get worse between the rounded up innocent kids who are in fear for their lives and the terrifying policemen who are looking for every angle they can to justify their deplorable actions.

“Detroit” starts off interesting enough, as almost sort of like a documentary. With a unique animated opener and cleverly editing in archival footage and pictures from the real life event, “Detroit” does a lot within its first few minutes to set the stage of what was going on during the time when the rioting started without establishing a true lead character. Bigelow and Boal start to introduce the characters slowly, until their paths all cross on a fateful night at the Algiers Hotel in 1967. This middle section of the film is where Bigelow demonstrates some of the finest directorial work of her career and easily creates what is the best scene of the year. She wrings out gut wrenching performances from everyone in the cast and cranks up the tension to a boiling point that when one character reaches a cathartic moment of release, it brought tears to my eyes.

The only issue with “Detroit” is that its third act feels like an entirely different film. Suddenly this horrifying story of survival in the face of so much hatred becomes a courtroom drama. It’s not the fact that the film has a predictable ending that is the problem. The problem is that at nearly two and a half hours long, “Detroit” attempts to cover too much ground and loses its momentum by the end when it should be reaching an even greater emotional climax than what came before. Unfortunately, that moment never comes. Had the film ended earlier and then gone for the fact based text at the end (Which it still does anyway), it would have been much tighter and effective. This is not to say that I was bored or that the filmmaking was bad by any means, but with such a long run time, there is a threshold for how much emotional turmoil we can withstand in a film. Boal and Bigelow push us to our limits just as much as the characters are pushed to their own and to experience their fear and pain is overwhelming at times. I could have watched “Detroit” for hours more because the skill of Bigelow and Boal is effortless and fascinating. However great it is at times, this film is emotionally draining and is not something that I would chalk up to be a pleasant viewing experience. However, it is an important one. No matter how many times this story is told. No matter how many times you know how it ends, it needs to be said and it needs to be seen. 1967 may have been 50 years ago but it does not mean that the battle for civil rights has ended.

While Bigelow and Boal deserve a lot of credit for having not only the courage to tell this story and also pulling it off with skill, but it’s the diverse cast which they have assembled together who really help to make “Detroit” something truly special. Without the brave, authentic and devastating performances by John Boyega, Will Poulter (Chilling) and literally everyone else in the film, “Detroit” would not be one of the best films of the year. It would still be very good but the ensemble in this film is truly incredible. Everyone gives it their absolute all and are put through the emotional ringer, some delivering the best work of their careers. To signal out anyone, would almost feel like an injustice, so I am not going to do that and I’ll simply say three words and three words only: SAG Ensemble Award.

Kathryn Bigelow and Mark Boal have once again told a fascinating story about our political and social landscape, only this time they went into the past to show us how little we have changed. “Detroit” is the equivalent of “Selma,” if “Selma” were a horror film. It’s brutal in its execution, uncompromising in its depiction of events and unflinching in the face of the inevitable backlash it will surely receive. While the film’s scope can be a bit unfocused at times, the level of skill and emotion contained within “Detroit” is unparalleled. It will break you, it will leave you breathless and it will hopefully call you to make a difference.