“DEATH ON THE NILE” 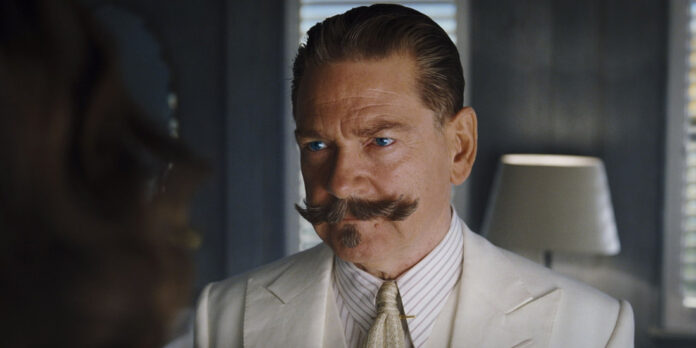 THE STORY – Belgian sleuth Hercule Poirot’s Egyptian vacation aboard a glamorous river steamer turns into a terrifying search for a murderer when a picture-perfect couple’s idyllic honeymoon is tragically cut short.

​​​​​​​Agatha Christie’s murder mystery novels have sold over two billion copies. Given Hollywood’s limited imagination, it’s not surprising that source material so beloved has proven quite popular to adapt. Since 1928, there have been over two dozen filmed adaptations of Christie in English alone, meaning we’ve gotten one roughly every four years. Christie’s novels don’t follow an exact formula, but they do share a similar structure, one that has been used for countless mysteries over the years in books and television in addition to film. All of which is to say that on the off-chance that you haven’t read one of her novels, you’re more than likely familiar with them in some way, and you’re absolutely familiar with how they work. What makes a film adaptation of a Christie novel successful, then, isn’t so much fidelity to the source material as it is how entertaining you can make it; everybody knows how they work, so in order to keep the audience engaged in the story, you have to dial everything else up.

Given the film’s popularity and the source material’s endurance, it wasn’t a complete surprise that Branagh decided to film a new adaptation of “Orient Express” in 2017, with himself as Hercule Poirot, Christie’s famously-mustachioed Belgian detective. The film harkened back to that period in the late 70s and early 80s when all-star casts livened up film adaptations of popular novels by swanning about in gorgeous gowns and attempting to act each other off the screen, but it didn’t really offer anything new to the text; it was fun but didn’t improve on either the original film or the novel. This time around, Branagh has decided to make some pretty significant changes to the source material and, in so doing, has made the film’s tone decidedly more serious, mainly sapping it of the almost-camp qualities that make the best Christie adaptations so much fun to watch. Gone is Mia Farrow’s child-in-an-adult’s-body fragility as spurned fiancé Jacqueline de Bellefort, in favor of Emma Mackey’s passionate fire. Nowhere to be seen is Angela Lansbury’s delightfully insane drunk acting as the perpetually sloshed romance novelist Salome Otterbourne, reimagined as a blues singer played with husky-voiced sex appeal by Sophie Okonedo. Sadly missed are the brittle sniping of Bette Davis and Maggie Smith as kleptomaniac American socialite Marie Van Schuyler and her (nudge-nudge, wink-wink) “companion” Bowers, replaced by an extremely toned-down Jennifer Saunders and Dawn French, and if you don’t understand the perversity of hiring such an iconic comedy duo and asking them to play it straight, then I just can’t help you. Most significantly, though, is the replacement of David Niven’s Colonel Race by Tom Bateman’s “Orient Express” character Bouc, in the role of Watson to Poirot’s Holmes, although saying why this is significant would spoil the one good change Branagh has made to the source novel.

For some reason, Branagh and screenwriter Michael Green have decided to treat Christie-like Shakespeare, adding a prologue and tinkering with the ending to deepen their chosen theme: how love can blind us and cause us to act recklessly, sometimes even destructively. While Christie certainly worked issues of class and privilege into her novels and wasn’t afraid of using her prose to hammer themes into her readers’ heads, no one reads an Agatha Christie novel for the social commentary. They read them to try to figure out whodunnit before her famous detective. Granted, it is often more difficult to stay ahead of the characters in a novel than in a film because, on film, we can see and hear what the characters see and hear – a shadowy figure can be described in a book as just that. Still, on the big screen, we can see the size and shape of the said figure and compare that to the characters to figure out who it is. But even still, the film tips its hand towards the mystery’s solution far too early, with some character actions that only make sense in one context, no matter how talented the performer is. Worse than that, though, is the film’s prologue, which occurs during WWI and fleshes out Poirot’s backstory. It gives Branagh more to play with and provides context to later reactions of Poirot’s that could otherwise have been more boringly told to us. Still, it stops the film dead in its tracks before it even gets going, meaning the actual beginning of the story has to work doubly hard to maintain audience interest.

Like its 70s forebear, Branagh’s “Death on the Nile” has its moments. An early scene at a jazz club features some exciting dancing from Mackey, Armie Hammer, and Gal Gadot. A short scene with Gadot in Cleopatra drag is the kind of camp excess that so enlivened previous Christie adaptations. Branagh himself is a delight as Poirot, and Green’s screenplay has some fun with the character’s predilections and fussy nature. Green also took genuine care with the characters of Salome, her daughter Rosalie (Letitia Wright), and the lawyer Andrew Pennington (now Katchadourian, played by Ali Fazal), changing their ethnicity to add some diversity to the cast but also directly addressing how that ethnicity affects how these characters move through this world, and what that might mean for their motivations to commit murder.

But on the whole, the film’s overly somber tone (especially in the second half) completely overwhelms those moments. While that tone leads to a suitably dramatic conclusion, it’s melodramatic in the way of so many Prestige Literary Adaptations, not in the form of a good old-fashioned murder mystery. While the impulse to treat the humble murder mystery as a literary work on the same level as, say, “Henry V” is somewhat understandable, even noble, this impulse ends up doing a disservice to Christie’s text. In trying to elevate Christie’s work, Branagh has erased the very sense of fun that has made so many people fans of it in the first place. They may not be great literature, but they are great books, and to pretend otherwise is to display a misunderstanding of what makes the material work as well as it does. In trying to push “Death on the Nile” to new heights, Branagh has instead held it back.