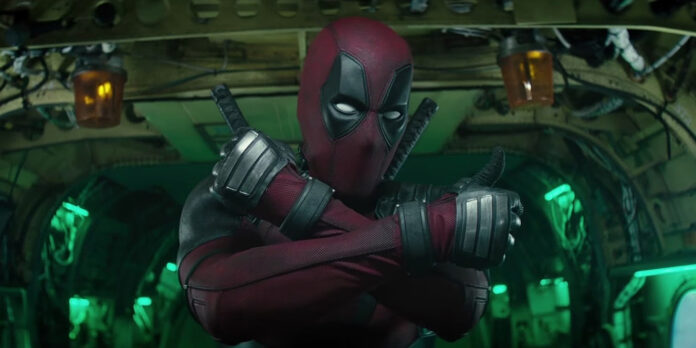 THE STORY – Wisecracking mercenary Deadpool meets Russell, an angry teenage mutant who lives at an orphanage. When Russell becomes the target of Cable — a genetically enhanced soldier from the future — Deadpool realizes that he’ll need some help saving the boy from such a superior enemy. He soon joins forces with Bedlam, Shatterstar, Domino and other powerful mutants to protect young Russell from Cable and his advanced weaponry.

​Fade in. Deadpool puts the final touches to his feng shui, carefully placing a desecrated Wolverine action figure on a side table before turning on the gas, lying on a bed of petrol barrels and blowing himself up; but “make no mistake, this is a family movie”.

Cue action montage set to Dolly Parton’s “9 to 5,” references to “Interview With A Vampire,” a comparison between “Yentl” and “Frozen” which will, without doubt, ruin both soundtracks for you, and an opening credits sequence parodying James Bond with a “Flashdance” reference thrown in for good measure. You’re only ten minutes into Sony’s much-anticipated sequel and you already know this is two hours well spent.

Only tenuously following on from the first movie, Deadpool’s (Ryan Reynolds) world is turned upside down and his girlfriend (Morena Baccarin), who we learn is expecting their first child, is put in harm’s way. With a little help from his X-Men buddies, an encounter with the young Russell (Julian Dennison) – a fellow mutant struggling to cope with the prejudice of the human world takes him on a humanising journey as he tries to protect the kid from Nathan Summers aka Cable (Josh Brolin), a time-travelling tough guy with vengeance on his mind.

Ryan Reynolds, whose career seemed dead and buried after his first attempt at a superhero film failed spectacularly (The green and animated “Green Lantern”), reprises his role as Deadpool with a weight of expectation on his sickeningly cool shoulders. Some films ultimately commit promotional suicide, and with a torrent of viral videos preceding it, not to mention some of the best marketing in recent years, the pressure was on. Reynolds slips into character with frightening ease and, for the most part, so naturally, that it wouldn’t be surprising to learn the whole thing was ad-libbed, if not for a screenplay so ingeniously crafted it would be a gross insult to its screenwriters Rhett Reese and Paul Wernick (And of course, Ryan Reynolds himself). On that subject, I implore anyone discussing “Deadpool 2” not to overlook how brilliant its screenplay really is. More than any other comic adaptation to date, it deserves to be taken seriously as an Oscar-contender in this category (Yes, I said it).

And speaking of the cast, Josh Brolin’s career has experienced a second coming, as he seems to have found a knack for playing any villain in every movie and absolutely nailing it. Of course, they had to get a Thanos dig in the screenplay, whilst taking every available opportunity to reference fellow Marvel franchises we were even rewarded with a flashing glimpse of the X-Men (You know, the proper ones). Some will call this cross-selling, but such cynics have no place in the Deadpool audience.

“Audience” is a term which should be employed loosely through much of the film, as the fourth wall is broken on numerous occasions and the self-referential dialogue boldly hoists us out of the film’s world, only to enjoy throwing us back in with a foul-mouthed salutation and a bloody spatter of awesomeness. This is a film which, like its title character, gives zero f*cks about convention and instead, relishes in that fact.

“Deadpool 2” epitomises the modern superhero movie – neither taking itself too seriously (Though they do make a joke in that vein at DC’s expense), nor trivialising the story like movies of old, but where many of Marvel’s offerings tip-toe along that balance, swaying from side to side when the occasion calls, Deadpool does a wheelie across the tightrope on a flaming unicycle with one hand, while casually flipping us off with the other and makes it across without even a wobble. The comedy is laugh out loud funny, the action is on par with any of its genre peers, and the story is engaging.

Not only is “Deadpool 2” a great standalone film, but it injects more complexity into Deadpool’s character, and firmly establishes the series as one which could feasibly continue for as long as Ryan Reynolds cares to do it. Many will leave the theatre thinking of this as a comedy, perhaps rightly so, but “Deadpool 2” is not without its poignancy. The emotional scenes are beautiful in their brevity and humility, contrasting so much against the comic action narrative that they pack more of a punch than even the weepiest of weepies. The final scene, aside from the fact that it feels a tad forced compared to the rest of the film, brings heart and emotional depth to the chracter Deadpool which validates him as more than just a blood-thirsty invincible degenerate vigilante. Crucially, the film refuses to give us a black and white narrative but delves into the grey of its entire cast. More than any other superhero film, “Deadpool 2” blurs the line between right and wrong, good and evil, and doesn’t shy away from exploring the intricate nuances which separate the monster from the hero and villain. This is everything you wished an X-Men movie could be, while simultaneously carving out its own identity for itself with bags of added entertainment value.

Oh, and did we mention the Celine Dion theme song? Classic Deadpool.