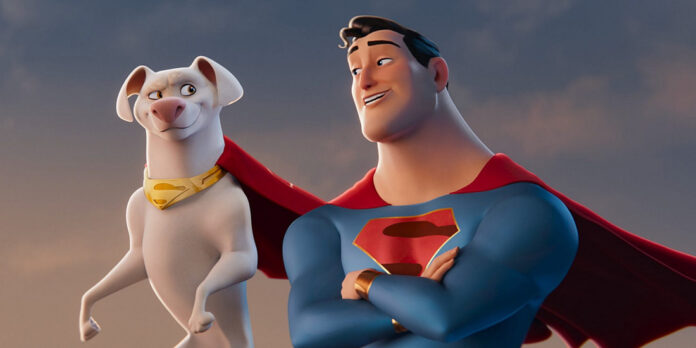 THE STORY – Krypto the Super-Dog and Superman are inseparable best friends, sharing the same superpowers and fighting crime side by side in Metropolis. However, when the Man of Steel and the rest of the Justice League are kidnapped, Krypto must convince a ragtag group of animals to master their own newfound powers for a rescue mission.​
​
THE CAST – Dwayne Johnson, Kevin Hart, Kate McKinnon, John Krasinski, Vanessa Bayer, Natasha Lyonne, Diego Luna, Thomas Middleditch, Ben Schwartz & Keanu Reeves

​​​​In an attempt to piggyback off of the success of DC’s Justice League” characters and create a whole new spin-off for no other reason than to generate a new toy line of furry, lovable pets, “DC League Of Super-Pets” falls short of adding anything meaningful to the Warner Bros. Discovery repertoire other than cash dollars in merchandising. The animated film wants you to believe that it’s an ode to “man’s best friend” but it may just be “man’s worst enemy.” What should’ve been an ingenious concept highlighting all new characters with talented voice actors and a few amusing jokes is a soulless and tedious expenditure lacking in originality.

Krypto aka. “Bark Kent/Superdog” (voiced by Dwayne Johnson) has been Kal-El/Clark Kent/Superman’s (John Krasinski) best friend from the time he was a baby, and his parents sent him from their annihilated planet of Krypton to planet Earth. “Our boy will need a friend,” says his parents, and it continues that way for the man of steel and his K-9 friend until his adult years when Superman is getting ready to settle down and get married to his girlfriend Lois Lane (Olivia Wilde). Afraid of being replaced, Krypto becomes madly jealous of Lois as he feels his best friend slipping away from their usual daily activities together. Superman goes to the pet store to find Krypto, a companion but LexCorp CEO and Superman’s archenemy Lex Luthor’s (Marc Maron) evil hairless guinea pig Lulu is at the pet store biding her time for an escape. She comes into possession of Orange Kryptonite, which (unlike the Green Kryptonite that can take away Superman’s powers) can give and take away powers from pets. She uses it to break out of the store and formulate a wicked plan not only to get rid of Superman but the entire Justice League, which includes Batman (Keanu Reeves), Wonder Woman (Jameela Jamil), Aquaman (Jemaine Clement), The Flash (John Early), Cyborg (Daveed Diggs) and Green Lantern (Dascha Polanco). When Krypto has his powers (which match Superman’s – strength, flight, heat vision, etc.) stripped away by Lulu, the self-reliant and serious dog has no choice but to partner with a misfit group of pets from the store who are looking for adoption but have found new powers instead. These characters include a Boxer named Ace (Kevin Hart) who now has super strength and invulnerability, a pig named PB who Vanessa Bayer who can change in size but has personal insecurities, Merton McSnurtle an older turtle who gains super speed and Chip (Diego Luna), a red squirrel with electrokinesis powers. Together, they learn to work through their fears and anxieties and become new companions along the way.

While the rest of the world wants Warner Bros. Discovery and DC to simply get the existing live-action “Justice League” characters right for a change on screen, instead of having all of their productions plagued by delays, controversies, and who knows what else, “DC League Of Super-Pets” is not going to quench anyone’s thirst for more action from their favorite characters. Yes, the human Justice League characters are present in this movie (with Keanu Reeves unsurprisingly giving the funniest performance of them all as the brooding Batman). Still, the focus is mostly on their pet counterparts, mainly Krypto. Dwayne Johnson is ideally suited for the role of the confident dog who has to learn a bit of humility and teamwork in order to rescue his master. Kevin Hart gives a surprisingly more subdued voice-acting performance than in “The Secret Life Of Pets,” and Kate McKinnon steals the show as the deliriously malevolent Lulu. You can tell McKinnon is relishing in every quip and menacing threat as she seeks approval from her master Lex Luthor through her villainous ways.

Sadly, outside of a few lively voice performances, “DC League Of Super-Pets” stumbles and falls in nearly every other area. The animation is typically flat, uninspired, and doesn’t come alive until the finale, where some particle animation is introduced, giving the final confrontation scale and vitality. The humor never lands outside of a few mild chuckles. One would think this would be more suited for children, but if it is, it’s for much younger audiences than what other animated films typically cater to. A few popular needle drops, such as Taylor Swift’s “Bad Blood” (while Krypto depressingly watches “The Great British Bake Off” by himself) and Queen’s “You’re My Best Friend” attempt to liven the mood but with bland action, comedy and a story so predictable with nothing new to say, there’s not much worth saving.

“DC League Of Super-Pets” is lacking in original ideas as it takes cheap jabs at Marvel, makes a ton of DC and animal puns, and even “Paw Patrol” in an attempt to start a new spin-off franchise from a group of superheroes the studio hasn’t been able to figure out their own films for yet despite having the means to do so. The voice performers do a commendable job of trying to breathe life into the adorable little characters, but the film’s humor and the story never fully connect as they should. It’s kind of surprising when you consider director/writer Jared Stern wrote “The Lego Batman Movie,” which knew how to blend these elements together to create something enjoyable for the entire family. Unfortunately, “DC League Of Super-Pets” is just not that super.