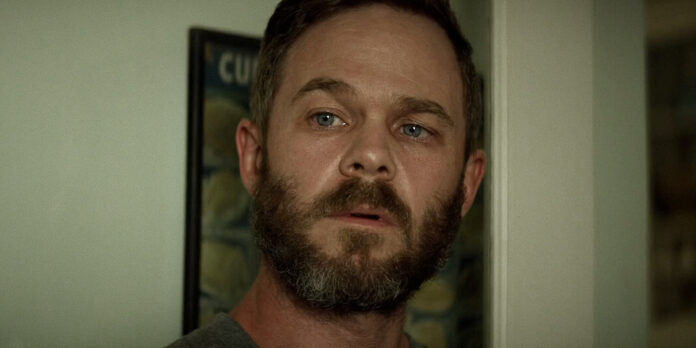 THE STORY – After his wife’s suicide, Detective Jeff Anderson becomes convinced that she has been murdered. Obsessed with his investigation, he finds out that his wife was the victim of a team of father-and-son serial killers and sets out to stop them.
​
THE CAST – Shawn Ashmore, Gary Cole, Lin Shaye, Richard Harmon, Daniella Alonso & Sonya Walger

​​​​What’s a suspense movie without suspense? What’s a mystery tale without mystery? These are questions that Julien Seri’s perplexingly-titled film “Darkness Falls” seems to be interested in exploring based on its opening. But unfortunately, these potentially intriguing ideas turn out to be merely accidental rather than intentional. “Darkness Falls,” at nearly every turn, self-deflates and lessens any potential moments of dramatic intrigue or originality.

“Darkness Falls,” tells the story of Detective Jeff Anderson (Shawn Ashmore)’s quest to find his wife’s killers. Her death appears to be a suicide, but Anderson is sure that his wife was murdered. Against the advice of his police captain and his mother, he takes it upon himself to not only investigate the few clues that were left at the crime scene but to also get in the heads of the killers to save the next victims.

If this premise sounds intriguing, if a bit uninspired, it’s unfortunately undercut by the fact that the film has practically no dramatic stakes – and I’m not just saying that as a subjective criticism. The film opens with the murder of Anderson’s wife at the hands of an unmasked and visible father-son serial killer team. This means that there’s no question as to whether her death was a murder or a suicide, nor is there a chance for the film to make a mystery out of who’s responsible because we meet the killers even before we meet the detective. It’s a truly mystifying choice on the part of screenwriter, Giles Daoust. If the film played with this in a way that explored dramatic tropes and our expectations of storytelling it might be worthwhile, but the film has no interest in this. Also, the film has a strange habit of consistently and quickly resolving any conflicts that occur within the span of the same scene in which they are introduced. The film constantly robs itself of any dramatic tension.

Not only is the script dramatically inert, but the filmmaking consistently takes every opportunity for an interesting choice and chooses the opposite. The editing is haphazard and mystifying. The performances – often because of the unsubtle writing – are unrealistically elevated. The music is overbearing. I could go on, but suffice it to say, it’s a frustrating watch. I will say that the film is mostly well shot, with some dramatic scenes playing out in long, handheld takes and with several pleasing establishing shots.

The script makes some choices that lead to unfortunate, unintended messages. The killers, according to Detective Anderson, hate women. And yet the two most prominent female characters (the detective’s captain and his mother) are mostly only used to tell the detective that he’s wrong when we the audience know that he’s right. Plus, the detective’s dead wife is given no significant backstory other than the fact that she was a promising artist. We are subjected to an endless amount of silent flashbacks where we see the husband and wife doing typically husband and wife things that serve little purpose to the plot or character development. It’s almost as if they’re merely padding the runtime. Another unfortunate side effect of a plot that relies on the fact that our lead character doesn’t believe his wife would be capable of suicide, is that the film takes on a strangely unsympathetic viewpoint towards those who die by suicide. At nearly every chance, “Darkness Falls” makes the least interesting and most unfortunate choice, resulting in a film that’s uninteresting and certainly a choice.