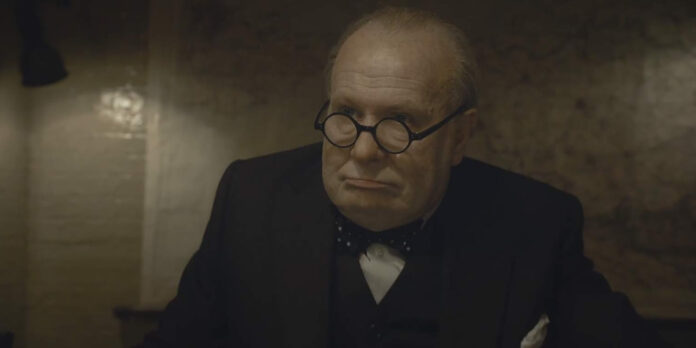 THE STORY – A thrilling and inspiring true story begins at the precipice of World War II as, within days of becoming Prime Minister of Great Britain, Winston Churchill (Academy Award nominee Gary Oldman) must face one of his most turbulent and defining trials: exploring a negotiated peace treaty with Nazi Germany, or standing firm to fight for the ideals, liberty and freedom of a nation. As the unstoppable Nazi forces roll across Western Europe and the threat of invasion is imminent, and with an unprepared public, a skeptical King, and his own party plotting against him, Churchill must withstand his darkest hour, rally a nation, and attempt to change the course of world history.

​What makes a great leader? In a time where the United States is lacking one, in comes “Darkest Hour” to show us a portrait of a man who united his country against great odds, overwhelming evil and lead his country to “victory at all cost.” Featuring a towering and transformative performance by Gary Oldman as Winston Churchill, “Darkest Hour” not only works as a “behind the scenes” look at another World War 2 film which came out earlier this year (“Dunkirk“) but in the hands of director Joe Wright (“Atonement” & “Anna Karenina”), stands on its own as a terrific film despite all of the other comparisons that will surely be thrust upon it (“Lincoln,” “The King’s Speech” and even Netflix’s “The Crown” to name a few).

Taking place in May 1940, “Darkest Hour” follows the selection of Winston Churchill (Gary Oldman) as the Prime Minister of Britain at a time of crisis when the British forces are facing annihilation and the Nazis are edging closer to invading Western Europe. With the weight of the world thrust upon his shoulders, the disliked, mumbling, heavy drinking, and smoking politician makes the unpopular decision to take a stand against Hitler and his men instead of accepting the offer to enter into peace negotiations. The result of which shocks King George VI (Ben Mendelsohn) who doesn’t know what to make of the man leading the charge against Hitler, the former Prime Minister Neville Chamberlain (Ronald Pickup) and the man who British Parliament are seeking to replace Churchill with, Lord Halifax (Stephen Dillane).

Much like how “Lincoln” focused on the most important act of Abraham Lincoln’s life (Abolishing slavery in America), “Darkest Hour” focuses on a very specific time period and act within the expansive life of Winston Churchill – his decision to either embark on peace negotiations with Adolph Hitler or face the complete annihilation of his army and the inevitable invasion of Western Europe by the Nazis. It’s a wise move by screenwriter Anthony McCarten to focus on one full month in May of 1940 and center the story around this pivotal time in world history. The drama feels very compelling, the stakes feel very real and the story yes, has been told countless times before. “Darkest Hour” does not reveal any new information that we did not already know about either the man or the event which Churchill’s whole perception is based on.

Even though the story does not break any new ground, director Joe Wright finds many interesting ways to tell it with clever editing, immersive sound work, an appropriate score and exquisitely, painter-like cinematography by Bruno Delbonnel. Many of the technical achievements in “Darkest Hour” are extremely noteworthy but special praise must be given to the make-up work and the cinematography. The cinematography is very impressive with high-key lighting and featuring a warm glow, even in dark settings. The film feels very monochromatic, showcasing the grim spirits of the country at the time. There are also a few shots that in terms of framing and composition, could easily be hung up on a wall to be analyzed and admired. It’s that beautiful. The make-up work, particularly on Gary Oldman (More on him in a moment), is astonishing. There are many close-ups of the actor’s face where the makeup is under heavy scrutiny and I would venture to say it is some of the most life-like I have ever seen. There’s no telling, from a makeup perspective, where the transformation begins and ends. Wright’s film, truly makes you believe you are watching Winston Churchill on screen and not the actor we have known for decades. Which leads me to Gary Oldman…

Academy Award-nominated for his performance in “Tinker, Tailor, Soldier, Spy” and the provider of dozens of memorable performances over the years, there is no doubt that Gary Oldman is one of the greatest actors of our time. Sure, in the last few years he has had some duds (“Criminal,” “The Space Between Us” and “The Hitman’s Bodyguard“). However, if you look over his career starting with “Sid & Nancy,” moving to his career in the 90’s with performances in “JFK,” “Bram Stoker’s Dracula,” “Leon: The Professional” to his more well-known work in blockbusters such as “The Dark Knight” and the “Harry Potter” series, there is no denying that the man is a chameleon, capable of shedding every ounce of the man known as Gary Oldman and completely transforming himself into the character he is portraying on screen. He does it yet again with Winston Churchill in “Darkest Hour” and the result is not only one of the best performances of his career (In a career with so much variety, it’s very difficult to say it’s his best) but also the one that may very well bring him his first Oscar win in the Lead Actor category. With stirring speeches, many long monologues and a commitment to nail down the vocal and physical transformation into the character, Oldman once again completely disappears into the role and delivers a performance that is always gripping, fascinating and a powerhouse. The only gripe I have (And the fault lies more with Wright than it does with Oldman) is that the weight of the performance starts to weigh on the audience towards the end of the film to the point where it can feel exhausting to simply watch and hear Oldman chew up the scenery with his larger than life take on the character.

“Darkest Hour” is a triumph for Joe Wright and his star Gary Oldman, who are backed by a stellar British cast which includes Ben Mendelsohn (Playing King George VI, which unfairly will bring comparisons to Colin Firth’s Oscar-winning work in “The King’s Speech”), Kristin Scott Thomas as Churchill’s supportive (And slightly underwritten) wife, Lily James as Churchill’s typist (Seen earlier this year in “Baby Driver“), Ronald Pickup and Stephen Dillane. All performers and collaborators come together to give us a historical piece that feels vital and timely in its depiction of a leader that raised above criticism, listened to his people and ultimately did the right thing. His actions have enabled his name to live on in history and even though there have been many depictions of the man known as Winston Churchill in the past, this is the most definitive.