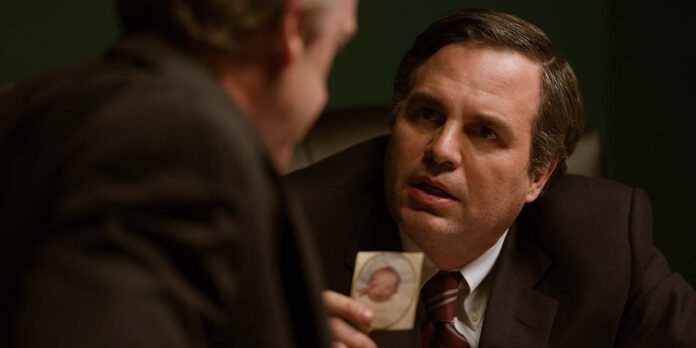 THE STORY – A tenacious attorney uncovers a dark secret that connects a growing number of unexplained deaths to one of the world’s largest corporations. While trying to expose the truth, he soon finds himself risking his future, his family and his own life.
​
THE CAST – Mark Ruffalo, Anne Hathaway, Tim Robbins, Bill Camp, Victor Garber, Mare Winningham & Bill Pullman
​
THE TEAM – Todd Haynes (Director), Mario Correa & Matthew Michael Carnahan (Writers)

​​​Todd Haynes is one of our greatest living filmmakers, and also one of our most interesting, which makes his latest film “Dark Waters” all the more confusing. The story of a corporate attorney who gets drawn into investigating, and eventually suing, one of the world’s largest corporations is remarkably straightforward. Haynes is usually not one for “straightforward”; his biopic “I’m Not There” has six actors playing different facets of Bob Dylan’s persona; his lesbian romance “Carol” uses the language of ‘50s melodrama to create a film that wasn’t possible in that era; and even his “children’s film,” “Wonderstruck,” is half black & white and largely silent. Now, Haynes presents “Dark Waters,” a legal drama that’s exactly what it says on the tin. You come to see Mark Ruffalo speechify against a large company doing Very Bad Things, and you get exactly that. Nothing more, nothing less.

After a mysterious prologue, the story begins in earnest in 1998, when Robert Bilott (Ruffalo) is pulled out of his first meeting as partner at the prestigious law firm of Taft Stettinius & Hollister to deal with a particularly aggressive, lower-class, heavily-accented farmer by the name of Wilbur Tennant (played by the great Bill Camp). Tennant shows up out of nowhere because Bilott’s grandmother informed him that her grandson is an environmental lawyer, and Tennant has had no luck convincing anyone in his town of Parkersburg, West Virginia that his cows have been dying because of poison from the local DuPont chemical facility. He doesn’t know (and frankly, doesn’t care) that Bilott is a corporate attorney, who represents chemical companies like DuPont. Bilott dismisses Tennant out of hand, but after a trip to visit his grandmother and Tennant’s farm, where he didn’t remember he spent time as a kid, Bilott can’t shake the feeling that something isn’t right. So he asks Phil Donnelly, a friend, and higher-up at DuPont, to see some documents. And thus begins Bilott’s nearly two-decade-long odyssey of research, motions, and a whole room full of boxes upon boxes of papers, all in pursuit of justice at the expense of his health and family life.

Working once again with cinematographer Edward Lachman and editor Affonso Gonçalves, along with newly-minted Oscar winner Hannah Beachler on Production Design, Haynes assembles a film that is technically sound. The muted muddy-blue color grading may not be aesthetically pleasing, but it fits thematically; and the film moves well despite a screenplay that replicates the frustration of the incredibly drawn-out process of building a case against one of the largest, richest corporations on the planet. The film also has a top-tier cast. In addition to Ruffalo and Camp, there’s Anne Hathaway as Bilott’s wife, Tim Robbins as his boss, Victor Garber as Donnelly, Bill Pullman as another lawyer brought onto the case and Mare Winningham as another Parkersburg resident who joins the suit. They all bring the necessary gravitas to their roles, and even though Robbins and Hathaway overdo it at key moments, the impulse to bring some energy to the proceedings isn’t a bad one.

But therein lies the rub: There isn’t much you can do to make this material fresh. The tropes of the genre are well-worn and have been executed superbly in countless films. It’s also difficult not to compare this to Steven Soderbergh’s “Erin Brockovich,” a film that rather effortlessly managed to be both a breezily entertaining star vehicle for Julia Roberts and a low-key character study. “Dark Waters” is perhaps overly dour and somewhat heavy-handed in its legal scenes and doesn’t care nearly enough about any character other than Bilott himself. While you certainly feel for the people of Parkersburg, and for Bilott’s family, the roles are underwritten in broad strokes, giving everyone the bare minimum of a personality. We are watching characters we know in a plot we know, with no deviation from the expected at any point. The one unique directorial choice is a timeline motif that helps us keep track of the amount of time that has passed in the case. Haynes makes powerful use of it, at one point slowly moving it from year to year without any other action onscreen, as we realize with slow-dawning horror just what it must have been like for Billot and the citizens of Parkersburg as time passed with nothing to show for it.

Still, there have been plenty of films that coast on using solid craft to tell a good story, and “Dark Waters” falls squarely into this group. The key element in this particular formula ends up being not any particular idea or style or creative decision, but rather the star, Mark Ruffalo. Ever outspoken, Ruffalo has embraced political activism more and more in recent years, and that passion comes through in this performance. You can feel the fire in his belly build the deeper Bilott gets into the case, and upon leaving the theater, it’s that passion that you’re left with. “Dark Waters” is fired up about the ways in which DuPont abused its power and what it did to not just the people of Parkersburg, not just the entire nation, but the entire world. You will be fired up about it, too. It’s just a pity that Haynes and crew were unable to deliver that message in a more unique and entertaining package.