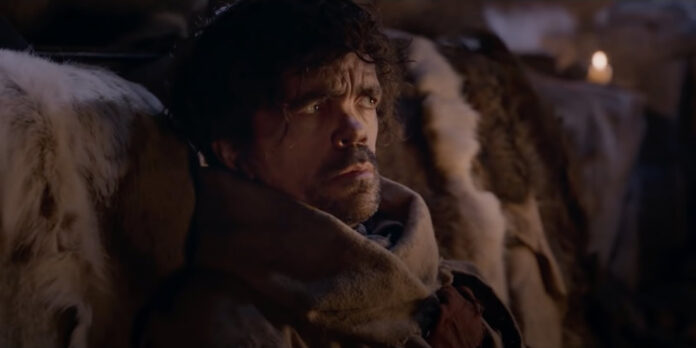 THE STORY – Cyrano de Bergerac dazzles everyone with his ferocious wordplay and brilliant swordplay. However, he’s convinced his appearance renders him unworthy of the affections of the luminous Roxanne, a devoted friend who’s in love with someone else.

​​​​​​​​​​Given his strengths as a director, it’s a bit surprising that Joe Wright hasn’t made a musical prior to this year. Many of Wright’s films have the sweep and energy of musicals, crying out for songs to take their drama to the next level – the rain-soaked, wind-swept romance of “Pride & Prejudice”; the theatrical metaphors of “Anna Karenina”; the heated, repressed longing of “Atonement.” It should come as no surprise then that his first actual musical, an adaptation of Edmond Rostand’s classic play “Cyrano de Bergerac,” is as beautiful an example of the genre as we have seen in 2021, a year blessed with a surfeit of magnificent movie musicals (and also “Dear Evan Hansen“).

The oft-told tale details the exploits of the titular soldier/poet (Peter Dinklage, whose height stands in for the abnormally large nose that has become synonymous with the character) whose love for his childhood friend Roxanne (Haley Bennett) remains unrequited in part because of his own belief that she could not love a man with his physical deformity, despite his prowess as both a fighter and a writer. Because of this, he agrees to write love letters to her from the handsome but inarticulate Christian (Kelvin Harrison, Jr.), with whom Roxanne has fallen in love at first sight. Wright captures the moment of their falling in love unsubtly but beautifully, as Roxanne sees Christian staring and is stunned to silence as she practically swallows the last line of the opening song of romantic longing, “Someone to Say.”

From there, Wright, his longtime cinematographer Seamus McGarvey and recent go-to editor Valerio Bonelli create a swirling symphony of romance, capturing the breathless ecstasy accompanying a new love. As with all great musicals, the filmmaking team uses the songs as a base and builds a filming style around them to accentuate and bring to the forefront the soul of the piece. The lilting songs by Bryce and Aaron Dessner of The National are lovely, with lyrics that range from beautifully complex to simply sweet. But in the hands of Wright and his team, they create a world that is drunk on love. As Roxanne achingly asks what it feels like to be in love in “Someone to Say,” we see her pass a whole city’s worth of people in love or longing for it, dancing past her carriage. When the letters she receives from Christian send her into a semi-erotic frenzy (“Every Letter”), the camera caresses her body like a lover as the world around her slows to a crawl, time seemingly stopping as she luxuriates in words that make her feel like nothing else ever has. Combined with the swirling strings and insistent drumbeats of the Dessners’ music, it feels intoxicating in the best possible way.

For her part, Bennett possesses a richly melodic singing voice that only adds to the power of the songs. She also does lovely work walking the very fine line of making Roxanne bright but just self-obsessed enough that it’s possible that she doesn’t realize Cyrano and Christian’s duplicity while also throwing in the possibility that she does realize and needs Cyrano just to say the words himself. She is every bit the equal to Dinklage. The actor is absolutely glorious as Cyrano, making his self-hate and self-possession feel wholly intertwined. He carries off the film’s trickiest scene as if it were nothing: Cyrano enters the film speaking in verse, which seamlessly flows into a song during a duel. It’s a big gambit, as the one thing that modern audiences hate more than characters “randomly” breaking into song and dance is characters that speak in poetry instead of plain English. Dinklage makes it feel natural, though, and when he sings in his deep baritone, it feels ragged and honest but not out of place amongst the rest of the cast. This is, by no small margin, the finest performance of Dinklage’s career, rich with a deep yearning that is palpable even through his resignation to the idea that he will never – could never – be loved in the way that he loves Roxanne.

The performances are just the icing on top of this cinematic cake, though. Wright proves himself just as naturally a fit for a musical as one would expect from his earlier work. He takes to the unabashed romanticism like a duck to water, luxuriating in the old-fashioned style. “Cyrano” wears its heart on its sleeve in a way that many in the world may be too cynical to accept. I thought I was one of those people, dear reader until I actually saw the thing. Within moments, the film had me under its spell, and by the halfway point, I had surrendered to it completely. By the last act, I was in tears. By adapting her own musical from the stage, screenwriter Erica Schmidt has captured the swooning romance of Rostand’s classic play and made it feel modern. The songs have a similar feel, with a late-film song for a group of soldiers writing letters to their loved ones a tear-jerking standout. Every element of “Cyrano” is perfectly in sync, focused on Wright’s vision of a world full of love and lovers, something even more powerful considering it was shot in 2020 during the pandemic in Italy. It turns out that now is exactly the right time for a musical update to a centuries-old stage romance; “Cyrano” is a generous shot of love after two years of strife. Let yourself be won over by its way with words, and you will swoon.