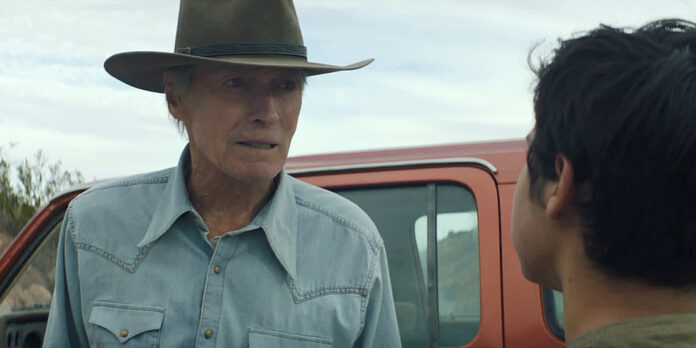 THE STORY – A onetime rodeo star and washed-up horse breeder, in 1978, takes a job from an ex-boss to bring the man’s young son home and away from his alcoholic mum. Crossing rural Mexico on their back way to Texas, the unlikely pair faces an unexpectedly challenging journey, during which the world-weary horseman may find his own sense of redemption through teaching the boy what it means to be a good man.​

​”Cry Macho” originated as a screenplay from writer N. Richard Mash in the 70s, which he then turned into a book of the same name. Multiple attempts to produce a film version never came to light, including an iteration with Clint Eastwood attached in 1988. Unfortunately, the same role initially intended for 58-year-old Eastwood doesn’t work at all for the 91-year-old actor. While he’s as competent as ever both in front and behind the camera, “Cry Macho” is dragged down by laughable moments that might’ve made more sense 33 years ago. This tepid, dull film is made all the more uninspiring by Eastwood’s vein and bizarre choice to cast himself in the lead role.

Mike Milo (Eastwood), a retired rodeo star, is tasked by his friend and former boss Howard (Dwight Yoakam) to head from Texas to Mexico. His estranged son Rafael (Eduardo Minett) is in Mexico City, where Howard believes the boy’s mother is abusing him. Why Howard would send a slow-moving nonagenarian to rescue Rafael from abuse in another country is never explained. Quickly overlooking that problem, Mike finds Rafael mixed up in cock-fighting. Mike and Rafael run from both the police and the boy’s mother, who doesn’t want her son to leave the country.

While the plot description sounds like an action thriller, the resulting film is quite different. Despite having multiple entities following the pair, Mike and Rafael never seem in a hurry to go anywhere as they drive slowly through the desert. When chased by one person or another, they never seem fearful or determined to get away. There’s no urgency, desperation, or conviction. It’s a strange tone that never matches the plot and makes it hard for the audience to care about what happens. If the characters aren’t too worried, why should we be?

Eastwood’s casting is the most outlandish element of “Cry Macho” and one that drags down anything that could have been interesting with this story. Too many scenes were clearly written for a younger actor, making for some unintentionally comical moments. For instance, when Mike first approaches Rafael’s mother (Fernanda Urrejola), who appears to be in her late thirties, she aggressively tries to seduce him. She then threatens him with physical violence when he spurns her advances. It’s truly strange and awkward in its presentation. Later on, there’s another moment where Rafael tries to get away from Mike. Mike is barely able to move, so he just sort of gently touches Rafael in an attempt to push him down, and Rafael collapses on the ground, though as if Mike physically bested him. It’s never believable.

There are occasional glimpses of the charming dramatic actor Eastwood can be. After breaking down in a small town, Mike strikes up a romantic connection with Marta (Natalia Traven), who helps the men on their journey. Here we see that Eastwood is as capable an actor as ever, exploring depths to his character with grace and a lifetime of experience. All of this would be fine if he just weren’t profoundly miscast for what this role requires.

The titular Macho does not, in fact, refer to a human. Instead, it’s Rafael’s pet rooster. The name provides conversation fodder for the two men as they drive through Mexico, leading to statements on “macho” culture and toxic masculinity. While Eastwood might be the perfect director to tackle this subject, given his fame as a macho western star, “Cry Macho” has nothing of substance to contribute to the conversation. Nor does it have much to offer in the way of entertainment, even for its targeted older demographic. Though captured with lovely cinematography from Ben Davis, the story is too thin and too inert to invest in. When the main characters in a film don’t care about what happens around them, there is a good chance that we won’t either. Unfortunately, this movie gives the audience little to hold on to and never really has a discernable point. Slow, bland, and dull, “Cry Macho” is competently put together by an admirably still working into his 90s Clint Eastwood, but it’s the very definition of forgettable.