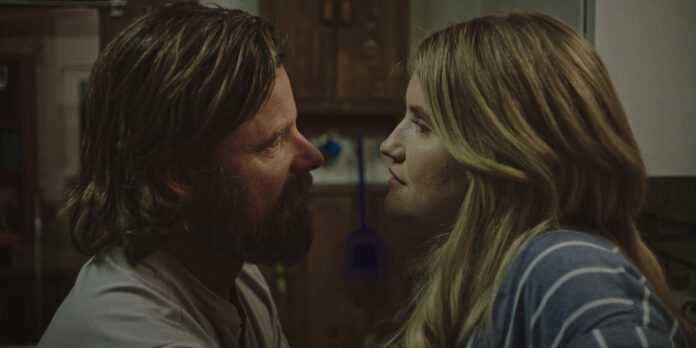 THE STORY – Separated from his wife, a well-intentioned father runs off with his transgender son into the Montana wilderness.

​​​​​​​​​​A man and his son, on the back of a horse, living off the land while on the run from the law. It’s not exactly a premise we’ve seen a hundred times before, but it feels like one. But in writer-director Anna Kerrigan’s “Cowboys,” there are a couple of key details that turn the film into something we definitely haven’t seen before: The man, Troy (Steve Zahn), is bipolar and off his meds and is acting more and more impulsively, and his son Joe (Sasha Knight), was born a girl named Josie. The two are running away from Joe’s mother, Sally (Jillian Bell), in an attempt to get to Canada where they can start over and Joe can live as the boy he knows he is. This is a scenario that could go wrong in any number of ways, but Kerrigan has made a series of choices that go a long way towards making sure her film goes right.

The first and most important of these is the cast. Jillian Bell is proving herself to be so much more than a great comedienne, and she finds the heart in a character that it would be easy to assume doesn’t have all that much of one. A late scene in a dollar store requires Sally to change practically on a dime and Bell absolutely nails it, giving so much more than what’s on the page. Steve Zahn is a very difficult actor to cast well, but when he’s right for a part, he will often walk away with the film. “Cowboys” gives him the best role he’s had in years, and he, in turn, gives the best performance of his career, never playing the role for comedy but still finding moments of humor. Troy’s acceptance of his son’s identity comes quickly but not exactly easily, and Zahn captures that uneasiness superbly. Zahn also has phenomenal chemistry with newcomer Sasha Knight, who is quite the find. Joe is a character that requires a lot of any actor, and Knight turns in a fantastic performance by any standard. He has a directness that is a perfect contrast to Zahn’s twitchy energy, and when combined with the often blunt dialogue, it leads to Joe feeling wise beyond his years. But then a moment will come that snaps back to reality: this child isn’t even ten years old yet. He may be able to articulate something very difficult about himself that takes some people decades to figure out, but he knows very little of the ways of the world.

The world of rural Montana in which the film takes place is given proper life by Kerrigan and her team. Every space feels warm and lived-in, packed with details that flesh out these characters and the community in which they live. The cinematography captures the landscape with an appropriate sense of child’s-eye awe but also with a feeling for the down-and-dirty quality of everyday life. As with all the best modern-day Westerns, nothing here is glamorized. Not even Troy and Joe’s plight, which Kerrigan makes clear from the beginning, is something done by both of them out of a sense of desperation without putting much thought into what exactly they’re doing or how they’re going to do it.

All these things help elevate the material, which has a strong overall shape but some clunky, on-the-nose dialogue that the performers can’t always save. “Cowboys” has the standard American indie film look and feel, which can leave it feeling a bit generic. But the story itself has a unique point of view, one that we see all too rarely these days. Joe’s story is one that must be told, so other parents dealing with something unimaginable to them can have an example to follow. The film is made with such obvious love that it’s hard to feel churlish, and it ends with Kerrigan beautifully threading a tricky needle: The hard part of Joe’s life is far from over, but this experience has made him stronger, and because of that, everything just might turn out well after all.