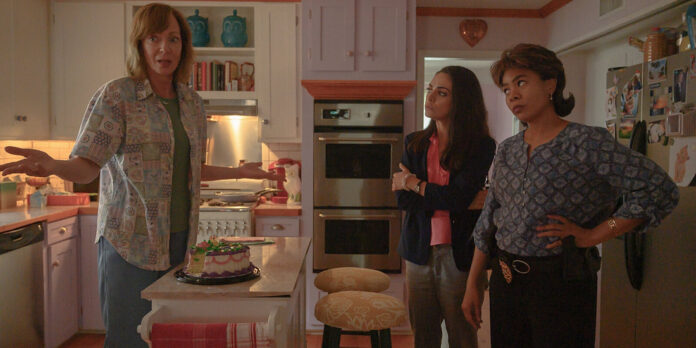 ​In “Breaking News in Yuba County,” Wanda Sykes’ character, Rita, says that life is just “doing the same boring shit and then you die.” And that’s certainly what it seems like for the film’s main character, Sue Buttons (Allison Janney). She lives a monotonous suburban life, working at a customer service desk job by day and going home to her cheating husband at night. But what’s missing from her life is something we all crave: attention. The film opens on her birthday, but there’s no celebration. On the contrary, she’s buying her own cake, making her own dinner reservations, and not receiving any birthday wishes at all. Not from her husband or even her sister. Speaking affirmations aloud to remind herself of her importance, she doesn’t let it bother her. She’s calm, but you’re waiting for her to crack like a woman on the verge of a breakdown. And when that waiting ends, crazy hijinks ensue. Her life and everyone else’s in the film turns upside down as the narrative takes deadly, unexpected turns in this female-centered crime-comedy and satirization of small-town America and the media.

With a screenplay by Amanda Idoko, Tate Taylor’s latest follows Sue in the aftermath of her husband Karl’s (Matthew Modine) disappearance. It’s spoken of as a missing person case, but is it? Only Sue knows the truth, and it’s not the angle she’s chosen to tell. The film is a cast of scene-stealers and their characters’ lives become intertwined as Sue makes up lie after lie to cover up what actually happened to her husband, sending everyone’s life into absolute chaos.

Amongst this hefty cast is Mila Kunis as Sue’s news reporter sister Nancy, who turns Sue’s plight into a big news story with the promise of giving her the attention she deserves – which is all Sue wanted in the first place. Then there’s wannabe mobster Mina (Awkwafina), her partner Ray (Clifton Collins Jr.), and her dad (Keong Sim) who Karl had dirty business dealings with as he washed their dirty millions; there’s the relentless Detective Harris (Regina Hall) who’s out to solve this whodunnit and knows there’s something more to Sue than meets the eye; there’s Karl’s dead-beat brother Petey (Jimmi Simpson), his boss/sidekick Rita (Sykes), and his pregnant girlfriend Jonelle (Samira Wiley); and finally, the news and current affairs show anchor, Gloria Michaels (Juliette Lewis), that Sue is obsessed with. As I said, the cast is hefty, but it surprisingly never leads to confusion. In all the chaos and criminality, their individual storylines all work well together to move this wacky story forward.

“Breaking News in Yuba County” is foolish most of the time as the narrative is built around a woman who creates a false narrative all for attention. It’s a play on the truth that, while not of the same degree, calls to mind a story like “Misha and the Wolves,” but this one is missing the shock and jaw-dropping twists. In its satire of America’s obsession with fame and media in all forms, the film doesn’t make for a very humorous dissection as the majority of the laughs are produced by Sykes because she’s, you know, Wanda f*cking Sykes. Her scenes are the best in terms of comedy, but everyone is a delight to watch no matter how often the film leans into the nonsensical. It won’t have the cult following of “Ma,” but Taylor’s latest is a silly and, at times, brutal look at current culture.