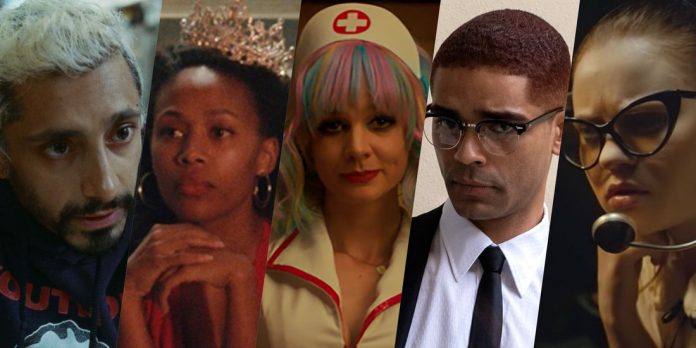 No need to be reminded of the steaming pile of a year that has just passed, with its staggering death toll and calamitous effects, both on the nation’s health and its economy. Though probably way down on the priority list, one missing entity that has been important to many is the absence of performing arts in any venue other than virtual — the gathering together of an audience in a theater or a concert hall is a joy of which we have been deprived for nearly a year. For filmgoers, of course, the fact that shuttered cinemas have cost us (for now) the latest works by names such as Wes Anderson, Steven Spielberg and Denis Villeneuve, whose films have been postponed into 2021, is particularly frustrating.

On the other hand, those venues that could show films, such as drive-ins and streaming websites, still needed products. Enter the rise of the independent film in 2020, a development that has presented us with a wide range of stories, from a time-loop rom-com to a look of deafness through the journey of a rock drummer, and from Black icons cooped up in a Miami hotel room to a female-led vengeance thriller with a dozy of an ending. Not only are each of these films among the year’s best, but in every case, they marked the first time that their directors had ever made a feature film.

On March 9, the Directors Guild will announce their five directing nominees for a first-time feature film, and I have a suspicion that their honorees will come from these ten distinguished directorial debuts in 2020.

Director Max Barbakow and his writing partner Andy Siara hatched the idea of this time-loop rom-com during a getaway at the desert retreat that lends the film its title. A unique mashup of science-fiction, social satire and absurdist comedy, their script would be a challenge for even an experienced director. Yet Barbakow, in his first feature, shows a maturity behind the camera well beyond his years, giving what could have been a hodge-podge of genres simply thrown together and shaping it into a film that has such a smooth flow that you feel like you’re slipping between one genre and another without noticing it. It helps, of course, when you have romantic leads such as Andy Samberg and Cristin Milioti, but “Palm Springs” is clearly Barbakow’s show and he makes the most of it.

It’s been too long since we have had a New York-based auteur for whom the city was often the main character in their stories. In the heyday of Woody Allen, Martin Scorsese and the early films of Spike Lee, the city brought a vibrancy to their storytelling, thanks in part to the unique voice telling of the city. We’ve spent decades waiting, but that new voice has finally arrived in the form of Radha Black and her semi-autobiographical “The Forty-Year-Old Version.” As Radha, once a promising young playwright at age 30 who has never built on her early success as she approaches 40, Blank has created an indelible character, and, as a director, her camera prowls throughout New York’s boroughs as her heroine searches for a new path that can renew her creativity. With this film, the real Radha Blank has found her new path to expressing herself via a new art form, and for her, that is clearly filmmaking.

Until recently known as an accomplished photographer whose arresting images have adorned the covers of a number of famous rock albums, Autumn de Wilde has taken on a most unlikely source of material for her film debut — Jane Austen’s 206-year-old novel “Emma.” Clearly, de Wilde hasn’t lost her knack for creating images that are right for her project — turn off the audio and with the film’s elaborate promenade featuring women in gowns and men with top hats, you might be fooled into thinking that you’re watching a Merchant-Ivory movie. But when Eleanor Catton’s screenplay kicks in, the contemporary sensibility of the tone that de Wilde takes is one much closer to a screwball comedy than an old chestnut, thanks in large part to her unique artistic vision.

Thanks to her acclaimed performance as Camilla Parker Bowles in the Netflix series “The Crown,” Fennell is well known to American audiences as an actress, but that will soon not be the only credit. Her writing and directing of her debut feature, “Promising Young Woman,” has been acclaimed for its bold insight that turns the familiar female revenge genre completely on its head. Just when you think you know where Fennell is taking you, she pulls the rug out with creative plot twists. And to top it off, she has created what is arguably the most shocking ending to a film in years, one you’ll be talking about for days afterward. For many critics and audiences alike, Fennell has not only made the best debut feature of the year but the best picture, period.

James, a Japanese-Australian filmmaker, has chosen the horror genre for her debut feature featuring three generations of women trapped together in a decaying mansion in “Relic.” The matriarch, Edna (Robyn Nevin), is in slow decline from Alzheimer’s, prompting her daughter Kay (Emily Mortimer) and granddaughter Sam (Bella Heathcoate) to move in. Using familiar horror tropes that rely on suspense rather than gore, James imaginatively takes on serious themes of the impact of mental and physical decline, as well as fears of being abandoned by the woman who raised you. And yet, James manages to do all of this while still scaring the hell out of you.

Regina King – “One Night in Miami…”

For her debut feature, the Oscar and Emmy-winning actress has chosen one of the most difficult challenges that a director is likely to encounter — how to film a one-set play and still make it feel like a movie. Added to that is the film’s set-up — a fictionalized version of a meeting with Cassius Clay, Jim Brown, Sam Cooke and Malcolm X in one motel room — and you’ve got a testosterone-heavy premise that many female filmmakers might decide to pass on. But not King. She wisely loads up the “One Night In Miami’s” first act with visual dazzle featuring both a prizefight and a nightclub debut, then gets down to the real business at hand in the remaining two acts, squeezing the tension tighter in every character confrontation and bringing out the very best in her noteworthy cast.

It took 13 years for Darius Marder to bring his feature film debut, “Sound of Metal,” to the screen. But he was determined to get the film just right, especially its elaborate sound design. Although the film’s artwork that shows rock drummer Ruben (Riz Ahmed) pounding away suggests a film with a high decibel count, Marder’s approach is actually to explore the power of silence as Ruben learns that he has lost 80% of his hearing and may soon go completely deaf. At times in the film, Marder allows us to experience just what Ruben is enduring by having us hear only what he can hear, sounds that are often muddled and unclear. It’s a risky move on Marder’s part and not one that many directors would take, but it pays off big as it allows us to share Ruben’s loss in a first-hand way that we could never have experienced otherwise.

Like “One Night in Miami,” “Babyteeth” is based on a play — one by the film’s screenwriter Rita Kalnejais — but it wasn’t until the production was almost set that Australian theater director Shannon Murphy came on board to helm the film. A fortunate choice it was since the story of a teen with terminal cancer who falls in love with an opioid addict could have been directed as a straight-ahead disease-of-the-week tearjerker. In Murphy’s hands, however, “Babyteeth” emerges on-screen as a very black comedy, no mean feat given the subject matter and particularly remarkable for a first-time film director. The ability to recognize the offbeat tone of material and manage to realize it on-screen is a very particular skill and one that will serve Murphy well throughout her promising film career.

Andrew Patterson – “The Vast of Night”

Is there a filmmaker less self-promoting as Andrew Patterson, director of the acclaimed sci-fi thriller, “The Vast of Night“? After all, his name does not appear with either a directing or editing credit, and he wrote the spec script under the pseudonym “James Montague.” But his do-it-yourself production displays mad filmmaking skills, from a structure based on long takes to an extraordinary tracking shot that traverses the entire town in a single motion that could throw any audience’s bearings off. Patterson scrapped the financing for “The Vast of Night” together by himself, but based on the virtuosity displayed here, Patterson should have no trouble financing his next project.

The standard piece of advice that’s given to new screenwriters is “write what you know,” and Channing Godfrey Peoples certainly took that advice to heart for her debut feature. While growing up in her Texas community, Juneteenth celebrations — a holiday marking the date in 1865 Texas slaves learned of their freedom — was one of the big deals of her childhood, particularly the annual Miss Juneteenth beauty pageants that served as a celebration of Black beauty within the community. The film that Peoples has fashioned from her experience is, at its heart, a mother/daughter story with one generation wanting every opportunity to be given to the next generation, whether the kids are interested or not. “Miss Juneteenth” feels authentic in every frame and signals that its creator is a director to watch.

Have you seen all ten of these? Which one is your favorite? Who do you think will be nominated for the DGA Award for Best Directorial Debut? Let us know your thoughts in the comments section below or on our Twitter account.