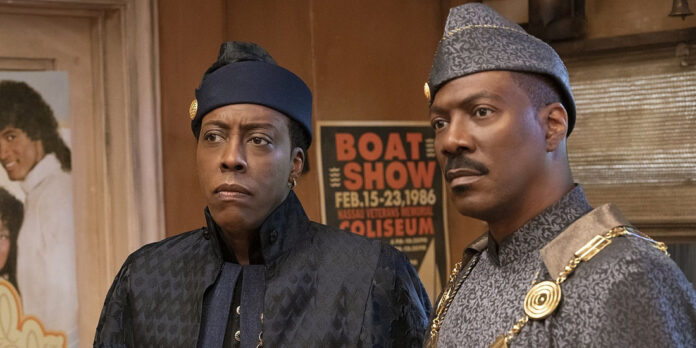 ​​Few names in comedy carry as much cross-generational weight as Eddie Murphy. At Murphy’s best, he has brought us some of the most iconic comedies in history. At his worst, unmitigated disasters like “Norbit.” Those hoping “Coming 2 America” would be the former will be disappointed. Those fearing it would be the latter will be relieved. While not the catastrophe that some long-delayed comedy sequels are, such as “Zoolander 2”, “Coming 2 America” is guilty of an almost greater sin. It is utterly average and forgettable.

The film’s family-friendly PG-13 rating, compared to the raunchy R-rated original, was the first sign of danger. But the film lacks bite in many ways beyond just pulling punches with it comes to language and crude humor. Everything about the film seems safe. With an excellent prosthetic makeup team on board, the film seemed prime to introduce us to a whole array of new background characters under makeup in the vein of the original’s barbershop quartet, The Reverend, and the band “Sexual Chocolate.” Instead, the film seems content to aim for nostalgia and just…brings back those same characters instead of inventing anyone new (aside from a single shaman character portrayed by Arsenio Hall).

Part of the reason the film’s humor feels blunted is that it is curiously devoid of Eddie Murphy. Much of the film is focused on Murphy’s children. The film curiously relegates Murphy to a similar role to that of James Earl Jones in the original: the austere patriarch who is fixated on maintaining tradition. In contrast, his children desire to set their own paths. And while that conceit makes sense in terms of the message the film is trying to send in terms of the importance of re-evaluating old traditions, it doesn’t mesh with the character Eddie established in the original film as an innocent, open-minded, and good-natured figure to relegate him to the stern, closed-minded father figure role. And ironically, for a film that speaks about breaking with tradition, this change in Eddie Murphy’s characterization is really the only place the film does break with tradition and expectations, instead opting for toothless comedy across the board elsewhere. Many of the film’s other gags seem perfunctory. The MacDowell’s Mcdonald’s knockoff is still present but aside from a lazy joke about it expanding to plant-based food, it offers little in the way of comedy.

So what works? There is some sweetness to the journey charted by Jermaine Fowler (“Sorry To Bother You“) as Eddie’s son, as an outsider learning to settle into an entirely different environment as royalty. The themes of families sticking together are touching. Wesley Snipes is having fun. The costumes, courtesy of “Black Panther’s” Ruth E. Carter, are spectacular. The VFX work in de-aging Murphy and Arsenio Hall’s characters is also impressive. While unwilling to break new ground, the prosthetic makeup work is also effective in bringing the film’s original iconic characters back to life. And the film does occasionally elicit a chuckle or two.

The problem is, the film is technically well made, and it isn’t actively un-funny. It just also isn’t particularly funny or inventive at all. It just…exists. Nobody will place this in the “Norbit” or “Meet Dave” realm of Murphy’s catalog. But the film is following up on one of Murphy’s most beloved films, and being the epitome of average is unavoidably disappointing.

Eddie Murphy still has formidable comic talents at his disposal. We saw that in last year’s excellent “Dolemite Is My Name.” But he wastes his talents here in a lazy and uninspired retread of his earlier work. We can only hope that coming years will see him offer us more “Dolemites” and fewer “Coming 2 Americas.” ​