“CODA,” “The Father” & The Last-Minute Surge During Awards Season 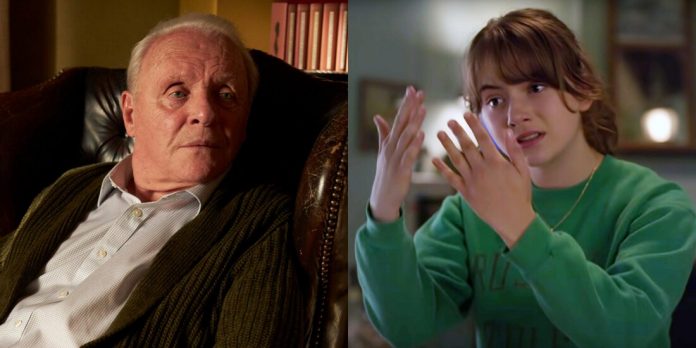 “CODA” and “The Father” don’t have a lot in common on their own, in their stories and tone. Nonetheless, the path that “The Father” took from Sundance to the Oscars in 2020 is one that “CODA” is starting to follow fairly closely in 2021. The path isn’t quite exact since “CODA” did far better in securing guild nominations last week than “The Father” did last year, but the end result on Oscar night could well be the same.

Back in the long-ago times of early 2020, “The Father” premiered at Sundance and instantly put Anthony Hopkins on the early map for Best Actor. But thanks to Sony Pictures Classics holding back a wider release until almost exactly a year later, the film and Hopkins were nearly an afterthought in all the early precursors except the Golden Globes. In fact, it missed getting nominated by the PGA and DGA and was ineligible at the WGA, which put the film on the bubble for a Best Picture nomination and made Hopkins look like a distant second at best to Chadwick Boseman for Best Actor.

Yet while Sony Pictures Classics looked foolish for squandering “The Father” in the early going, saving it as one of the last films voters saw paid off big time. Not only did it make Best Picture as Hopkins began to climb back in Best Actor, but it also kept Olivia Colman in for Best Supporting Actress and got a surging Florian Zeller in for Best Adapted Screenplay. From then on, “The Father” kept rising to the point where Zeller completed his rally for a Best Adapted Screenplay win despite barely winning any precursors, and Hopkins achieved a similar rally in Best Actor despite the very ugly circumstances in which the Academy announced it. Although “The Father” was under the radar much of the season, its two comeback above-the-line wins made it the second biggest major winner of the night behind “Nomadland.” Although the likes of “The Trial of the Chicago 7,” “Promising Young Woman,” “Minari,” “Mank,” and “Sound of Metal” were talked about as the biggest threat to “Nomadland” at one time or another, it would seem that “The Father” was probably the closest thing to a Best Picture runner-up in 2020, however distant it may have been.

Now, a year later comes another film that made a significant early splash at Sundance, got held back early by a very questionable release strategy, and now seems to be surging right as voting begins. Though “CODA” didn’t take the exact path “The Father” took last year, it is starting to become close enough, especially with its potential for the same basic outcomes on Oscar night. While “CODA” did premiere at Sundance, it made a far bigger impact there than “The Father” did, sweeping pretty much every award and audience prize it was up for. As a result, it wasn’t picked up by an indie studio like Sony Pictures Classics, but a would-be streaming giant in Apple+ for a record-setting $25 million deal. And while Sony Pictures Classics waited a year to send “The Father” out in theaters and art houses, Apple+ merely waited until August 2021 to put “CODA” on its streaming service to a wider audience.

Yet, since August isn’t usually an ideal month for movies to make an impact in theaters, let alone on a streaming service, “CODA” passed by as a mere blip on the streaming radar at first. What’s more, since it premiered just a few weeks before the Telluride, Toronto, and Venice film festivals, the eyes of Oscar pundits were clearly looking elsewhere right as “CODA” went online. Indeed, once “The Power of the Dog,” “Belfast,” “King Richard,” “Dune,” and other fall contenders captured everyone’s attention, it looked like “CODA” was in for a long fight ahead just to stay on the award season radar.

Nonetheless, the slow and steady route for “CODA” began to slowly but steadily work, starting with a Gotham Awards Supporting Performer win for Troy Kotsur and a Breakthrough Performer win for Emilia Jones. From then on in, “CODA” began to rack a steady stream of critic award nominations for the film, Kotsur and its screenplay. By the time the industry circuit started to follow suit at the Golden Globes and SAG, “CODA” was just about locked into the Best Picture field even before the PGA, WGA, and DGA even weighed in. “CODA” cemented itself among the Best Picture nominees faster than “The Father” did, if only because it didn’t wait to campaign in full force. However, as the major guild nominations got closer and the Oscar voting period neared as well, there were more and more reports of voters discovering and loving “CODA” right as voting approached. Like with “The Father,” it appeared “CODA” was making an enormous impact at just the right time, though it wasn’t on the bubble anymore by then. As such, when “CODA” secured its place among the PGA ten-picture field and then locked up a WGA nomination, it was suddenly easy to think just a little bigger. Director Sian Heder had barely gotten any precursor nominations and had been shut out in early industry voting. However, if she could ride her film’s coattails into a DGA nomination, it would be the ultimate proof of how big it had become. In fact, if “CODA” could have secured that nomination and gotten into the PGA, WGA, and DGA all in one day, the time would have come to consider it not just as a Best Picture nominee but a potential Best Picture frontrunner.

For about three hours, that potential race-changing possibility lingered, yet it was not to be as Heder was left out again. Since “Driving Miss Daisy” is the only Best Picture winner in modern times to win without a DGA nomination, “CODA” and all the other films left out of the DGA are all but officially out of the running for a Best Picture victory. Even if Heder somehow gets into the Oscar Best Director field, that probably won’t be enough to change things now. However, while a Best Picture victory is out of the question, the ceiling for “CODA” on Oscar night is still fairly high. In fact, it is as potentially high as “The Father” was, as it too could get two surprise above-the-line victories and become the second biggest winner of the year if things keep breaking right.

“CODA” seems set for a Best Adapted Screenplay Oscar nomination, in a category that “The Power of the Dog” has dominated all year. But “The Power of the Dog” is not eligible at the WGAs, which means that the WGA will likely determine who has the best shot to upset Jane Campion at the Oscars. At this point, the WGA Adapted category is probably between “CODA” and “West Side Story,” with “Dune” as a potential spoiler. However, musicals and blockbusters don’t usually win screenplay prizes. Therefore, if “CODA” wins the WGA, it can emerge as the most likely alternative to “The Power of the Dog” at the Oscars. And if Campion is so locked into winning Best Director that enough voters feel she doesn’t need a second win of the night, let alone a second Screenplay win in her career, “CODA” could well win the Adapted Oscar despite barely winning any Screenplay prizes all season. In fact, this is pretty much exactly how “The Father” won Adapted last year as well, as its screenplay barely won anything all season but still overtook the eventual Best Picture winner in “Nomadland,” and its eventual Best Director winning writer.

When “The Father” won Adapted, it looked like that would be its collective Oscar victory for the season until Hopkins’ closing upset. Regardless of how the victory was presented and ordered, it was still a startling comeback over someone who dominated all season long in Boseman – and it proved just how strong “The Father” became at the very end. To that end, if “CODA” does match that path, then maybe Kotsur can pull off a similar upset over Kodi Smit-McPhee for Best Supporting Actor, despite Smit-McPhee being the most dominant actor in precursors this season. Unlike Boseman, Smit-McPhee is part of the Best Picture frontrunner in “The Power of the Dog,” so overtaking him could be more challenging. Still, “CODA” has become strong enough lately that it may be due for at least one Oscar victory. The most likely outcome is that either Kotsur wins while “The Power of the Dog” takes Adapted Screenplay to lock up a Best Picture triumph, or that “CODA” only surprises in Adapted while Smit-McPhee takes Supporting Actor and locks things up for his movie that way. But if “CODA” is as strong at the very end as “The Father” was after a long, often daunting looking year-long path from Sundance to the Oscars, then it is right on track to take two surprise major Oscars as well – and end up as the second biggest winner of the entire season as well.

Do you agree or disagree with this comparison? How do you think “CODA” will perform at the Oscars? Check out the NBP team’s current Oscar predictions here and let us know your thoughts in the comments section below or on our Twitter account.