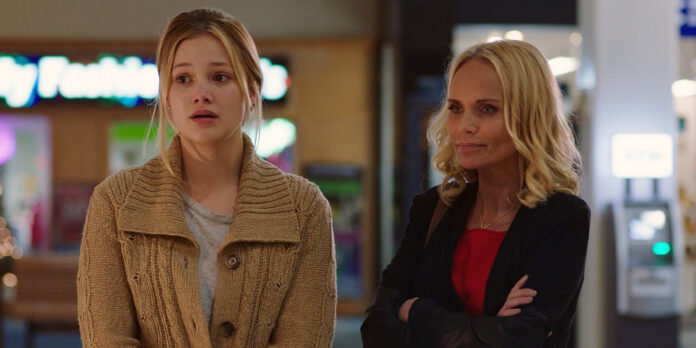 THE STORY – Set in the quaint town of Livingston, New Jersey, high school juniors Veronica Krauss and Bernard Flannigan are thrust together in a political rouse after Veronica finds out she’s ranked #2 in her class. During their campaign, the two over-achieving students learn a thing or two about politics, life, and love.

​​Coming-of-age stories never go out of style; from the sweet charm of John Hughes’ 1980s classics like “Sixteen Candles” or “Ferris Bueller’s Day off” to Gil Junger’s “10 Things I Hate About You,” or more recently, Greg Berlanti’s critical success “Love, Simon,” we crave nostalgic reminders of simpler times and angsty love stories fueled by pubescent teens and growing pains. In Eric Stoltz’s “Class Rank,” he attempts to assuage this craving as best he can, but the film’s quaint fanfare and eccentric idiosyncrasies fall flat in part due to a story that doesn’t really need to be told.

Veronica Krauss (Olivia Holt) is a high school junior aspiring for an acceptance to Yale and a career as a Supreme Court Justice. Every action she makes is to help her reach these goals, but it all comes crashing down when she discovers her class rank; number two, not number one. While protesting the policy of class rankings in a Board of Education meeting, Veronica meets Bernard Flannigan (Skyler Gisondo), a grammatically and politically correct student with a penchant for behaving several decades older than his age. Veronica, in an attempt to eradicate class rankings, convinces Bernard to run for the Board of Education. As his campaign manager, she learns more about Bernard than she expected, and they each discover what it means to speak up, find love, and be true to themselves.

It would be remiss not to mention the overarching theme of white privilege prevalent in “Class Rank.” Intentionality aside, the simple fact that this film revolves around two white, upper-middle-class students whose greatest concerns are which high profile college they’ll be attending and whether they can have bike lanes constructed in town, is hard to ignore. “Class Rank,” though not terrible, has backslid into a part of white-washed, heterocentric cinematic history we had finally begun to distance ourselves from with films like the aforementioned “Love, Simon” and others such as the Academy Award-winning “Moonlight” or last year’s “The Big Sick.” It was made five years too late to seem relatable, though it’s young lead actors will speak to all over-achievers who possess a longing to exceed their own expectations.

Olivia Holt and Skyler Gisondo are sweet and frothy as Veronica and Bernard “Bernie,” respectively, and if it weren’t for their quirky and empathetic change in behaviors, each character would’ve otherwise been lost in a narcissistic shell of self-importance. Gisondo gives Bernard a much-needed kick of complexity and humanity— sure, he may roll his pant-leg up every time he rides his bike or interjects conversations with words only used by scholars, but he is also deeply intuitive and wide-eyed. What could’ve easily been a one-dimensional and robotic performance as the school nerd and outcast instead was sheathed in a genuine desire to better himself for the greater good.

However, the best part of “Class Rank” is the supporting plotlines which, frankly, would’ve made for a better movie. There’s the budding love story between Bernard’s Grandfather Oswald (Bruce Dern) and Livingston Weekly Editor In Chief Barbara (Kathleen Chalfant), both of whom deserved more screen time than they were given. Dern is delightful as the scraggly but whiplash smart Oswald, who despite having a Ph.D. in Political Science and enough experience to run for President, spends his days making blueberry crepes and playing shuffleboard in the backyard.

Further, Kristen Chenoweth plays Veronica’s mom with poise, spice, and wisdom. Any scene involving Janet discussing her work as a producer on “Law and Order” is a thrill— she plays the juggling, career-oriented mother with ease, and her relationship with her ambitious daughter garnered much more intrigue and charm than “Class Rank” may have intended.

Cinematographer Gavin Fisher and director Eric Stoltz enhanced these characters with Wes Anderson-esque symmetrical shots of detailed props and emphasized facial expressions and physicalities as a way to focus our attention to the intricate personalities found in “Class Rank.” Despite this, there’s still a divide between the film and its audience. It’s an unrelatable attempt at an overdone story; “Class Rank” as a whole has been done many times before, and more importantly, done better. If this film were Veronica Krauss, it would be anything but thrilled with its ranking.