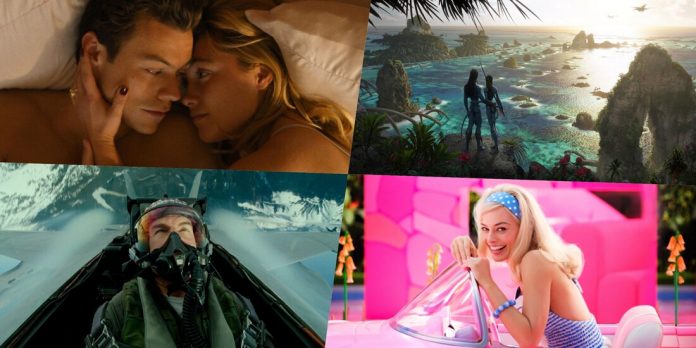 ​​CinemaCon 2022 has concluded, and the National Association of Theater Owners received looks at the biggest movies coming to theaters over the next couple of years. Each of the major studios presented new trailers, clips, reveals, and more, all with stars and directors in tow. While the biggest story to come out of CinemaCon this year may have been about an inappropriately timed process service, there’s plenty of actual movie news to discuss. Let’s look at the most exciting developments from CinemaCon 2022.

TOP GUN: MAVERICK RECEIVES STELLAR FIRST REACTIONS
One of the few films to receive an early screening at CinemaCon was Paramount’s long-awaited “Top Gun: Maverick.” After years of delays, many of which were Covid-related, the legacy sequel debuted to unanimous praise from an enthusiastic crowd at the Las Vegas event. Reviews are currently embargoed, but social reactions were through the roof. Some called it a “perfect blockbuster” and even declared it “better than the original in almost every way.” As with every Tom Cruise film these days, critics say it demands a big-screen viewing experience and the Joseph Kosinski-directed film looks set to be the next big movie of 2022. The film will premiere at Cannes next month, followed by its wide release on May 27. If the reviews remain as positive as these early reactions, “Top Gun: Maverick” could kick the summer off with significant box office numbers, aided mostly by premium formats such as IMAX & Dolby.

MISSION: IMPOSSIBLE 7 GETS ITS TITLE
Another oft-delayed Tom Cruise action spectacle, the seventh entry in the “Mission: Impossible” franchise, got an official title reveal this week. The seventh installment in the action franchise will be called “Mission: Impossible – Dead Reckoning Part One.” Filmed concurrently with the eighth film by director Christopher McQuarrie, this latest entry promises a new level of intrigue and massive stunts from the death-defying Tom Cruise. Via video, Cruise introduced a new trailer for the movie from atop a biplane, naturally. The trailer is likely attached to “Top Gun: Maverick,” which will be hitting theaters at the end of next month. “Dead Reckoning Part One” doesn’t release until July 14th, 2023, so there’s still a long wait to go and an even longer wait until Part Two (which will most likely be Cruise’s final time playing Ethan Hunt) on June 28th, 2024.

SONY DOUBLES DOWN ON SPIDER-MAN VILLAINS
Despite the recent critical panning of “Morbius,” Sony reinforced its commitment to the Spider-Man Universe with its presentation this week. While there was no information about live-action films featuring the web-slinger himself, Sony committed to a January 23rd, 2023 release date for “Kraven The Hunter,” starring Aaron Taylor-Johnson, and July 7th, 2023, for “Madame Web,” starring Dakota Johnson. Additionally, Sony announced another feature, “El Muerte,” starring singer Bad Bunny. Bad Bunny will make his feature debut in this year’s “Bullet Train,” which impressed Sony enough to cast him as the little-known Spidey villain. Lastly, the studio confirmed that a third “Venom” film was officially in the works. It’s a massive gamble to commit to so many features focused on villains, especially given the performance of “Morbius,” but both “Venom” films have proved immensely popular with audiences, if not with critics. In other Spider-Man news, Sony previewed next year’s buzzed-about sequel to the Oscar-winning animated film “Spider-Man: Into The Spider-Verse” with “Spider-Man: Across The Spider-Verse,” and further teased its sequel, now titled “Spider-Man: Beyond the Spider-Verse,” which will release in 2024. Needless to say, the footage stunned those in attendance, making it one of the most exciting films of next year.

BARBIE SETS RELEASE DATE
Greta Gerwig’s highly anticipated “Barbie” is undoubtedly a departure from her first two Best Picture-nominated features, but it’s shaping up to be her biggest hit at the box office. Warner Bros. officially announced the film will release on July 21st, 2023 and gave us the first official image from the movie of Margot Robbie as the titular character. The internet has been abuzz comparing the insanely crowded ensemble of “Barbie” with the similarly packed cast of Christopher Nolan’s “Oppenheimer,” and now the films will go head-to-head at the box office next July. Typically I would suspect one of the studios would back down and move their movie from the other. Still, considering this is Nolan’s first film since angrily leaving Warner Bros., they may have made this move intentionally out of spite. There’s still a long time to go, so we’ll see if these two major films will stay put.

AVATAR 2 FINALLY UNVEILS FOOTAGE AND TITLE
After thirteen years and a dozen announced release dates, James Cameron’s sequel to “Avatar” might finally see the light of day later this year. Disney announced the film would officially be titled “Avatar: The Way Of Water,” and it is still expected to release on December 16th, 2022. A spectacular trailer also debuted to the audience, and reactions were through the roof. The internet already has it out for this sequel (just as they have with each James Cameron film going back to “Titanic”), but the crowd at CinemaCon appeared thrilled to get a look at Cameron’s latest. Now that “Avatar: The Way Of Water” feels more real than ever before, Warner Bros. backed off their challenger for the December 16th release date, moving “Shazam! Fury of the Gods” to December 21st. It was also announced that the first “Avatar” film will be returning to theaters this September before the release of its long awaited sequel to get audiences ready for what’s to come, which promises to be another game-changer for the cinematic medium.

THE HUNGER GAMES PREQUEL ANNOUNCED
Continuing the theme of resurrecting IP, Lionsgate announced an adaptation of Suzanne Collins’ “The Ballad Of Songbirds And Snakes,” a prequel to “The Hunger Games,” was officially in the works. They announced that the film would release on November 17th, 2023, though they didn’t reveal any members of the cast, writers, or director. The release date may be a bit ambitious without any talent attached, but it’s possible this could get into production quickly. This franchise is undoubtedly a high priority for Lionsgate, so I would also expect the film to be split into two or even three parts to ensure they get their money’s worth.

A QUIET PLACE PREQUEL TITLE ANNOUNCED
While Universal prioritized trailers and clips over significant news announcements, they did reveal the new title for the next entry in the “A Quiet Place” franchise. “A Quiet Place: Day One” will be helmed by “Pig” director Michael Sarnoski and will release on September 22nd, 2023. As the title implies, this is a prequel to the previous two films, though it’s not expected to feature any of the original cast. A direct sequel to “A Quiet Place Part II” is still in development, though no new information was released at CinemaCon.

THE BATMAN TO GET A SEQUEL
Perhaps the least surprising major announcement out of CinemaCon: Matt Reeves and Robert Pattinson will return to Gotham for a sequel to “The Batman,” which, as of this writing, is still the highest-grossing film of 2022. No other information was unveiled about this sequel, like if any other cast members will be returning or who the new villain will be (though Reeves has hinted he wants to tackle Mr. Freeze). Still, it would be shocking for any significant players not to return to this world. Any other information will have to wait at this time.

CinemaCon always gives theater owners and theatergoers plenty of films to look forward to, and this year was no different. Many of the trailers, clips, and imagery that debuted this week will trickle online in the coming weeks, further exciting fans of movies worldwide. There was plenty of footage shown, such as Keanu Reeves fighting with nunchucks in “John Wick: Chapter Four,” Damien Chazelle’s Hollywood epic “Babylon,” the first look at Marvel’s “Wakanda Forever,” Olivia Wilde’s “Don’t Worry Darling” starring Florence Pugh and Harry Styles, and more. It was an exciting week with lots to look forward to in the days, months, and years ahead.

What was your favorite piece of movie news that dropped at CinemaCon this week? What trailer are you most excited to see? Let us know in the comments below or over on our Twitter account.