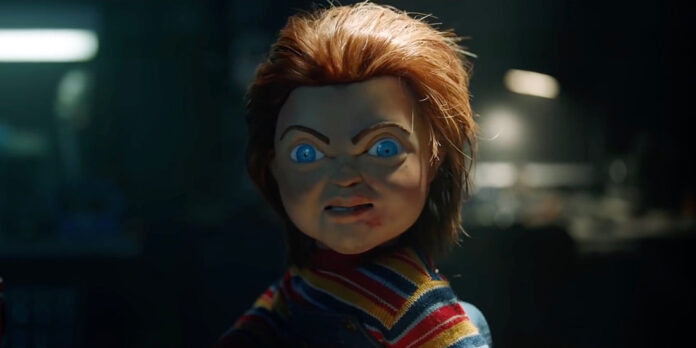 THE STORY – After moving to a new city, young Andy Barclay receives a special present from his mother — a seemingly innocent Buddi doll that becomes his best friend. When the doll suddenly takes on a life of its own, Andy unites with other neighborhood children to stop the sinister toy from wreaking bloody havoc.
​
THE CAST – Aubrey Plaza, Gabriel Bateman, Brian Tyree Henry & Mark Hamill

​​​The year is 2019. The place is a manufacturing plant in Vietnam. A melancholy-looking factory worker gets yelled at by his supervisor, and then decides to make some last-minute, unauthorized changes to the code of the product he’s putting together. He removes all the product’s inhibitors, most notably those to guard against bad language and violence, and then promptly throws himself out a window. The product he has been working on is a Buddi doll, an Alexa/Siri-like technology home assistant in the body of a large mechanical doll that is being marketed by the Kaslan Company to kids as their “friend until the end”.

This is how Orion Pictures and BRON Creative’s reboot of the horror franchise “Child’s Play” begins, and where it goes from there, pretty much everybody knows, or can at least guess given that set-up: The doll, free of inhibitions, starts killing people, specifically those who it thinks are coming between it and its new owner and “friend until the end,” Andy. This doll-comes-to-life-and-it’s-actually-EVIL! setup is a formula nearly as old as the horror genre itself, and one of the smartest moves Tyler Burton Smith’s screenplay makes is to completely do away with the “is it the doll or is it the kid?” bits that tend to show up in these kinds of stories. We’re here to see a slashing killer doll, and everybody knows it, so let’s just cut to the chase!

The problem, however, is that every choice the film makes after that is the very definition of a mixed bag. “Child’s Play” has great fun playing with our expectations of where Chucky will show up and when (yes, the doll still ends up with the name Chucky, despite Andy trying to name it Han Solo), but doing so completely saps the movie of any scare factor. The updated doll design looks perfectly at home in today’s world, but it also looks ugly and creepy, even before it starts to do very bad things. Andy is a young teenager with a hearing aid, which helps further his isolation and thus both his attachment to Chucky and people’s propensity to disbelieve him when he tells them Chucky is evil, but the film does absolutely nothing with the hearing aid outside of one scene that implies Chucky is speaking to Andy directly through it – which doesn’t even matter, because no one else is around!

This mixed bag extends to the filmmaking craft, as well. For every strikingly lit shot, there is at least one that is badly underlit. For every sequence where the editing elicits a laugh or a gasp, there’s one where it falls completely flat. For every performance that sings (Mark Hamill’s superlative voice work as Chucky or Carlease Burke’s un-tech-savvy neighbor), there’s one that just doesn’t work (Aubrey Plaza is badly miscast in an inconsistently-written part and Brian Tyree Henry looks noticeably bored in most of his scenes).

The one thing about “Child’s Play” that pretty unambiguously works is the cultural satire. It presents a world where everything – our TVs, radios, phones, heating/air conditioning units, computers, cameras, cars, all of it – is connected via technology, and how laughably easy it is for all that to be manipulated in about a dozen different ways, none of them good. The parallels between the Buddi doll and our Google Homes and Amazon Echos and the like are unmistakable, and the introduction of an electric self-driving car that Chucky proceeds to wreck is a perfect bit. This is a smart update of the original’s take on the consumer culture of the 80s, in which every TV show doubled as a commercial for a toy, which would spawn a whole line of clothing, bedding, books, videos, albums, and on and on and on.

So here we have a reboot that takes a big chance in actually updating the story in ways that make sense and offer lots of possibilities, but has so much else that goes wrong that the final product ends up being a wash. In most ways, it’s about on par with the original “Child’s Play.” It’s about as well made, it’s about as funny, it’s about as smart. Which begs the question: why make it at all? Deep down, we all know the answer. As well-done as the cultural commentary is, this wasn’t made because writer Tyler Burton Smith and director Lars Klevberg simply had to make that point, and thought this was a good vehicle for it. No, this was made to make money off of people who love the original film. And honestly, it does a good job of reminding you of what was good about the original. Unfortunately, 2019’s “Child’s Play” is only almost as good as 1988’s “Child’s Play”. And in this day and age, “almost” shouldn’t cut it.