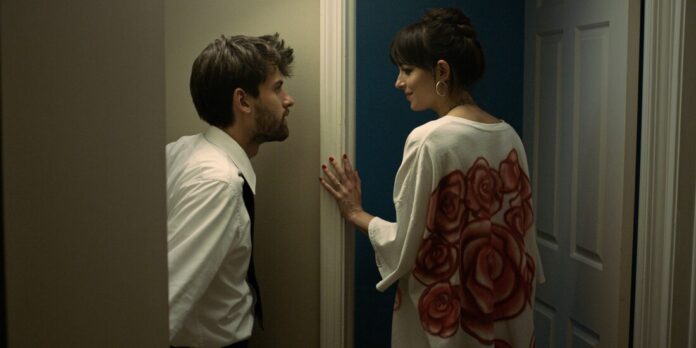 THE STORY – Fresh out of college — but now what? Higher education failed to provide 22-year-old Andrew with a clear life path going forward, so he’s stuck back at home with his family in New Jersey. But if college did teach him one thing, it’s drinking and partying — skills that make him the perfect candidate for a job party-starting at the bar and bat mitzvahs of his younger brother’s classmates. When Andrew befriends a local mom, Domino, and her daughter, Lola, he finally discovers a future he wants, even if it might not be his own.  ​

​​​​​​Uncertainty is an expected aspect of young adulthood in this day and age. Moving from collegiate life into what society has deemed the “real world” is no longer an easy, obvious pipeline. It’s curious then that so few films have explored this treacherous metaphorical canyon into which most twentysomethings find themselves tumbling. Never fear, recent grads, for Cooper Raiff is here to capture this strange time in life in his hilarious and refreshing new film “Cha Cha Real Smooth.” This is the second feature film from the young director following his well-regarded debut “Shithouse,” and his also-curiously-named sophomore feature confirms the absolute confidence and talent found in this director-writer-actor.

Andrew (Raiff) is 22 years old and living the dream: sleeping on his middle school brother’s bedroom floor and working at a food court eatery threateningly named Meat Sticks. However, he creates a side hustle for himself as a “party starter” for the many bar and bat mitzvahs held for his brother’s classmates. The attendees at these celebrations are consistent, including a young mother named Domino (Dakota Johnson) and her daughter Lola (Vanessa Burghardt). Domino and Andrew quickly make a connection, and the aimless young man suddenly finds himself with a renewed sense of purpose. Complications present themselves in the forms of the insecurities and frustrations that plague both of their lives, along with the threatening existence of Domino’s often-absent fiancé (Raúl Castillo).

While it depicts a stressfully relatable time in life, Raiff’s screenplay manages to bring a humorous and humane energy without ever tipping over into being obnoxious or saccharine. In fact, his brilliant writing works together with his direction to create a completely unified tone, largely owing to the perfectly calibrated acting ensemble. Raiff’s creative voice is strong, and the talented roster of actors tasked with lifting his characters off the script’s page admirably help his vision to be realized. From the opening scene, the team of performers precisely demonstrates the right feeling to bring the charming world of “Cha Cha Real Smooth” to life. But what makes the film so refreshing is the way characters’ paths develop in unexpected ways, reflecting the movie’s overarching examination of the unpredictable manner in which we can both move through life and let life move through us.

While the actors work together as a whole exceptionally well, a few specific performances can be singled out as exceptional. Burghardt, making her film debut, is a winning presence, and her snappy line deliveries make for hilarious dialogue exchanges between her and Raiff. As Andrew’s Mom, Leslie Mann is as charming and magnetic as ever. She gets the chance to truly shine, and even in her limited screen time, her range as an actress is on full display. Odeya Rush’s portrayal of Macy, a casual friend of Andrew’s, gives Raiff a great sparring partner for his quick-witted character. And Raiff himself is a wonder. At no point is he anything but focused on his performance, which is especially impressive considering he directs himself. Plenty of much more experienced actors have been unable to take on the double duty of working both behind and in front of the camera – it takes a specific kind of self-assurance to be able to pull it off without drowning in egomania. The standout, however, is Johnson. She’s been turning in consistently captivating work for years now, and here she is given the perfect role to show off her specific brand of weaponized fragility. She believably plays a woman of contradictions – resourceful yet doubtful, loving yet distant, grounded yet spontaneous – and her particular ability to use the smallest of expressions to convey complex feelings is put to great use. As usual, she’s a marvel and an absolute star.

While his skills as a director when it comes to commanding actors his apparent, some of Raiff’s more technically based abilities could use some fine-tuning. Specific shot compositions and lighting decisions, unfortunately, mystify. Select song choices and where they’re placed within the film distract from the action rather than commenting on and elevating the stakes of the moment. But these are all minor critiques and are only worth pointing out because he shows such promise as a director. If he can master certain practical elements, he has the potential for a long, stellar career.

“Cha Cha Real Smooth” is the kind of enchanting film that comes along every now and then to firmly remind us of what really matters in life – the connections we make with others. It’s an ode to the unknown future and the joys we can discover as we barrel towards it, unprepared but excited for what’s to come. Just like his character, Cooper Raiff undoubtedly has a bright future ahead of him.