“CATCH ME IF YOU CAN” 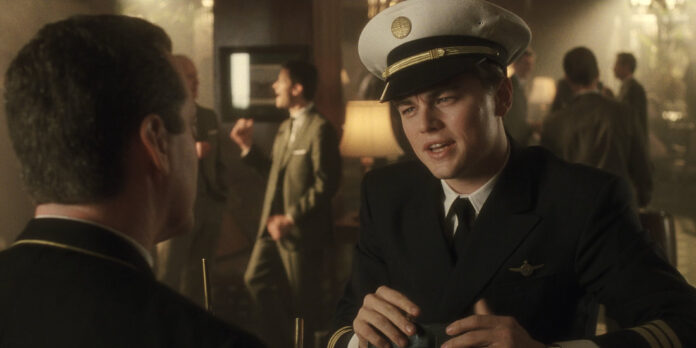 THE STORY – Frank Abagnale, Jr. (Leonardo DiCaprio) worked as a doctor, a lawyer, and as a co-pilot for a major airline — all before his 18th birthday. A master of deception, he was also a brilliant forger, whose skill gave him his first real claim to fame: At the age of 17, Frank Abagnale, Jr. became the most successful bank robber in the history of the U.S. FBI Agent Carl Hanratty (Tom Hanks) makes it his prime mission to capture Frank and bring him to justice, but Frank is always one step ahead of him.
​
THE CAST – Leonardo DiCaprio, Tom Hanks & Christopher Walken

The quest to identify the greatest Spielberg movie typically ends on one of the following titles: “Jaws.” “Saving Private Ryan.” “E.T.” “Raiders of the Lost Ark.” “Schindler’s List.” While those movies are worthy of the crown, another, more neglected work belongs in the conversation. I’m referring, of course, to “Catch Me if You Can.” Spielberg’s 2002 film is a burst of fun and style, and a prime example of the filmmaker’s ability to maneuver between settings and tones. “Catch Me if You Can” peels back the layers of a seemingly glamorous lifestyle, revealing something sadder and more rebellious at its core.

The movie is inspired by the real-life adventures of Frank Abagnale (Leonardo DiCaprio), Jr., a kid from the New York City suburbs who, from ages 15-21, blossomed into a con man of formidable skill. Abagnale used his charm and audacity to pose as a doctor, a lawyer, and a pilot, to name a few of the professions that he claimed as his own. He forged checks and seduced beautiful women, accumulated wealth and recognition. That recognition came, in part, from the FBI. “Catch Me if You Can” creates a fictional FBI agent, Carl Hanratty (Tom Hanks), to represent the investigative and judicial press against Abagnale. The cat and mouse game between the youthful Abagnale and the grizzled Hanratty serves as a key thread throughout the film, with Hanratty chasing his target around the world and the two men forming a weird sort of mutual admiration despite their all-encompassing desire to outwit one another.

Abagnale and Hanratty are played by Leonardo DiCaprio and Tom Hanks, respectively, and it is such a joy to watch the two stars engage in their feisty rapport, much of it shared via long-distance telephone calls (the two ended up working together, as Abagnale eventually gave up his deceitful ways and assisted the FBI as an expert on the issue of financial fraud.) It is the dynamic on the periphery of the Abagnale-Hanratty chase, however, that provides “Catch Me if You Can” with much of its emotional nuance. Spielberg and screenwriter Jeff Nathanson deftly use Abagnale’s turbulent adolescence as the foundation for his foray into life as a con artist, primarily focusing on the dissolution of the marriage between the protagonist’s parents and the impact that the divorce had on Abagnale’s worldview. “Catch Me if You Can” draws a direct line between Abagnale’s sadness at seeing his father’s lofty dreams go unrealized and his efforts to reclaim those lavish ambitions by stepping into whichever role (doctor, lawyer, pilot, etc.) he desired. Christopher Walken’s Oscar-nominated performance as Frank’s father is a masterful display of tenderness, disappointment, and pride – his character’s genuine affection for his son gives way to the pain of not living up to expectations, which then gives way to a mischievous twinkle when he realizes the scope of his son’s larger-than-life behavior. Whereas the Abagnale-Hanratty relationship serves as the main narrative source, the relationship between father and son is the movie’s emotional compass.

As moving as “Catch Me if You Can” is, it is also just a thrill to watch and a feast for the eyes and ears. The colors and costumes pop off the screen, particularly when Frank the “pilot” and his team of flight attendants stroll through sunny Miami. The transition between scenes matches the breathlessness of Abagnale’s travels – the shine of South Florida is juxtaposed with the snow of France during the holidays. These moments are amplified by the brilliant, bouncy score from the great John Williams. In addition to its cosmetic and auditory appeal, “Catch Me if You Can” also boasts an array of memorable performances and cameos from actors who went on to stardom later in their careers, namely Amy Adams, Elizabeth Banks, Ellen Pompeo, and Jennifer Garner. “Catch Me if You Can” holds up beautifully on the basis of its cinematic substance, but it also possesses the good fortune of prescient casting.

As Steven Spielberg’s latest movie, “The Post,” enters theaters this weekend and a lot of “Catch Me If You Can” takes place around Christmas through various years, it is worth taking a fresh look at his cinematic canon. “Catch Me if You Can” deserves a place in the pantheon. Biopics can easily turn sad, but “Catch Me if You Can” enlivens the genre and takes the viewer on one hell of a ride.​