“THE UNBEARABLE WEIGHT OF MASSIVE TALENT” 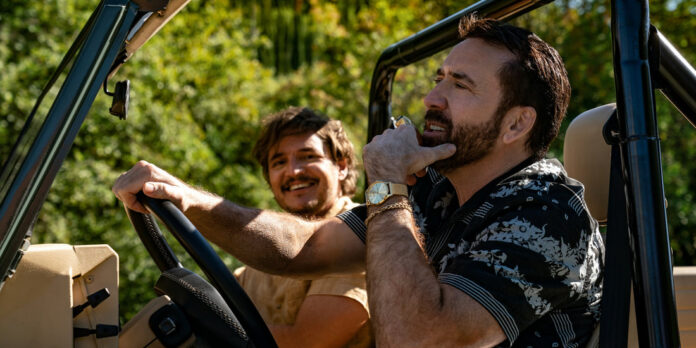 THE STORY – Unfulfilled and facing financial ruin, actor Nick Cage accepts a $1 million offer to attend a wealthy fan’s birthday party. Things take a wildly unexpected turn when a CIA operative recruits Cage for an unusual mission. Taking on the role of a lifetime, he soon finds himself channeling his most iconic and beloved characters to save himself and his loved ones.​

​​Tom Gormican’s “The Unbearable Weight of Massive Talent” is a weird movie, and not necessarily in the way you might expect. It is a movie wherein Nicolas Cage plays Nick Cage, a fictionalized version of himself. Sharon Horgan plays his wife, Neil Patrick Harris plays his agent, and Tiffany Haddish and Ike Barinholtz play CIA agents. It begs the question of whether or not these other actors exist in this world, to say nothing of their movies. And what of Pedro Pascal, who plays a wealthy drug kingpin/aspiring screenwriter? Does “Game of Thrones” exist in the world of the film? Does Nick Cage not have the visual of The Mountain crushing Oberyn Martell’s head like a grape ingrained in his memory like the rest of us?

Not that these questions really matter much in the scheme of how much fun the movie is, because “The Unbearable Weight of Massive Talent” is the funniest film of the year so far. Cage is down on his luck after having lost yet another big part and is confronted with the knowledge that his daughter (Lily Mo Sheen) didn’t enjoy watching “The Cabinet of Dr. Caligari” with him. His constant need to feed his own ego (embodied by a younger version of himself called Nicky, who constantly reminds him that he is a superstar) and his insistence that he is the center of the universe have led him to the point where even those closest to him don’t want to be around him. Except for Javi Gutierrez (Pascal), who worships Nick and shares his love for movies. After reluctantly accepting Javi’s offer of a million dollars to attend his birthday party in Spain, Nick eventually comes to enjoy Javi’s sycophantism and the two bond. Unfortunately, that’s when CIA agents Martin and Vivian (Barinholtz and Haddish) tell Nick that Javi is actually a dangerous drug kingpin who has kidnapped the daughter of the President of Spain. Now, Nick will have to give the performance of his life to trick Javi into thinking he wants to make a movie with him while he searches the compound for the missing girl.

Cage and Pascal have electric chemistry when sharing the screen. Pascal’s puppy dog qualities provide the perfect foil for Cage’s outsized self-aggrandizement, to the point where he even manages to steal scenes from the superstar actor, which is never an easy task. The supporting cast is also pleasing: Horgan is a great no-nonsense counterpoint to Cage’s ego-driven flights of fancy, and Barinholtz and Haddish make the most of their sadly limited screentime. But this is really all about Nic Cage, and he gives the audience everything you could possibly want. Everything that has made Cage a superstar is here: the reckless disregard for tonal modulation, the sensitive introspection, the odd, Shatner-like vocal rhythms, and inflections. An early scene where he busts out a dramatic monologue in a thick Boston accent as a last-ditch effort to get a role is a gut-busting delight. As always, Cage understands the assignment and revels in the opportunity to laugh at himself, but he still manages to find a strong emotional core in the character. He’s also a generous scene partner. He’s always fully present and open to what the other actors are doing and fully cognizant of the moments meant for other actors to shine while never losing sight of his character’s need to be the center of attention. Cage knows this is a unique opportunity, and he meets the moment fantastically, turning in one of his best performances.

However, as hilarious as the film’s screenplay may be, is it really worthy of him? There isn’t anything in the main plot that feels like it calls for Cage specifically, instead of any old past-his-prime movie star. The references to Cage’s career are all superficial, and they don’t really build to any sort of grand statement other than “even though the better days of this actor’s career are behind him, his movies live on and inspire others to love movies as much as he does.” That’s a lovely sentiment, and the film has fun ribbing Cage about his obsessive cinephilia. But, the lack of a more in-depth, specific look at Cage itself may hold the film back from being an all-caps ‘Great Film,’ but in a roundabout way, the film ends up becoming just as much of a love letter to movies in general as it is to Cage, perhaps even more so. That feels exactly right for a film about Cage, whose interviews display a deep knowledge of and love for all kinds of cinema. As the film leans more into being a bit of a riff on Cage’s own “Adaptation” in the last act, it finds its footing just when you think it might have been starting to run out of gas. As “The Unbearable Weight of Massive Talent” barrels towards its riotous yet sweet conclusion, it becomes clear that Nick Cage always gives it his all, no matter the project. Lucky for us, nothing is going to stop Nicolas Cage from doing just that for many years to come.