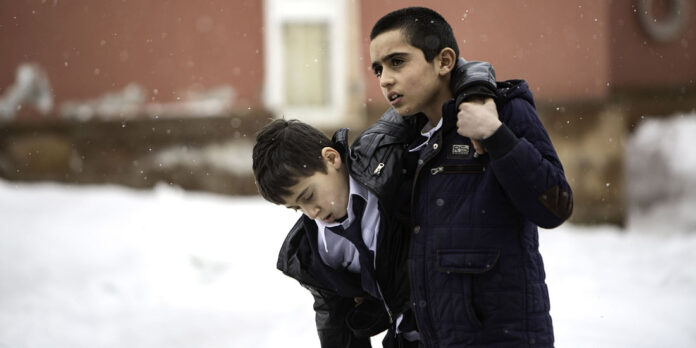 THE STORY – Strict rules prevail at a remote boarding school in the mountains of Anatolia where Turkish teachers educate gifted Kurdish pupils from the surrounding area. Once a week, the boys are allowed to shower and, like everything else here, this process is monitored. One night, twelve-year-old Memo asks his friend Yusuf if he can sleep in his bed. But, afraid of gossip, Yusuf refuses. The next morning, Memo is sick and cannot attend class. The school’s heating has broken down and an icy winter’s day takes its course. Memo’s condition worsens. He is no longer responsive and Yusuf is only allowed to talk when prompted. Gradually, the events of the previous night are revealed.

​​​Welcome to a regional boarding school in Anatolia, Turkey. Here, the temperature is thirty degrees below zero. Snow constantly falls for half the year, the boiler is in disrepair, and the boys shower once a week in massive stalls by scooping water out of a bucket and pouring it over their heads. And you better not horse around, or else a teacher might punish you. In Memo’s (Nurullah Alaca) case, the punishment is to wash with cold water. Thankfully, Memo’s best friend Yusuf (Samet Yildiz) is there to offer an extra towel to help keep him warm, even if he won’t go so far as to let Memo climb under the covers with him when he wakes up in the middle of the night. But the next morning, Memo is so sick he can barely speak or move. Thus begins Ferit Karahan’s “Brother’s Keeper,” which follows Yusuf’s day-long odyssey to get help for his best friend. As we follow Yusuf from building to building, room to room, we experience the worst day of his life right alongside him.

Karahan tells his story patiently but efficiently, not wasting a single one of the film’s 85 minutes. His screenplay (co-written with Gülistan Acet) is a marvel of structure: Each scene gives us a new piece of information about the world, the people in it, and/or what happened to Memo. As this information accumulates, Karahan paints a bleak portrait of the education system in Anatolia. Not only does this boarding school in a remote area have the sickroom in a separate building from the dorms and classrooms, so anyone sick has to travel outside in the bitter cold to get there, but it doesn’t even have a nurse on staff. It’s so cold that the lock freezes shut regularly and in one fantastic bit of black humor, all the adults who enter the room slip on the growing patch of (slowly) melting snow in the doorway. Additionally, class divisions are exposed amongst the students, the principal, and the teachers and between the teachers and the local maintenance staff. Physical abuse is also rampant. And on top of it all, everyone assumes Memo should be fine after an aspirin just because he doesn’t have a fever.

As our guide through all of this, Samet Yildiz is a force. Yusuf is mostly passive, waiting for the adults to speak and tell him what to do, but Yildiz gives him a will of iron, unwilling to let his friend go uncared for. Watching this young boy’s light struggle to shine in the darkness is heartbreaking, and as the roadblocks to getting Memo help keep piling up, it’s impossible not to feel for Yusuf. One late scene in which he sneaks away to call home is particularly gut-wrenching, as Karahan lets the scope widen just enough for us to see that the problems aren’t relegated to just the school.

“Brother’s Keeper” gets knottier as it goes, each new character or piece of information only complicating something that should be easy. But Karahan sees it all clearly: Everything is interconnected and no one person is solely responsible for what happens to Memo. It may seem a bit easy or manipulative to say all this through the story of a deathly sick child. Still, Karahan keeps everything from being that simple, placing the audience in a vice that keeps getting tighter, coming to a conclusion that takes your breath away. In the end, with its haunting final shot, “Brother’s Keeper” stands as a powerful indictment against traditionally masculine systems, providing a strong argument that compassion and understanding will do children more good than fear and punishment. The film’s increasingly layered portrait of a system designed to turn boys into “strong” men lays bare all the ways it fails those children and the men they become. In a word, it’s stunning.