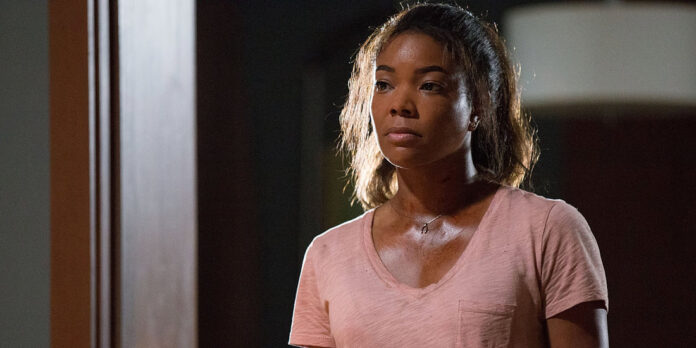 THE STORY – Shaun Russell takes her son and daughter to her late father’s secluded, high-tech home to prep it for selling. They aren’t the only ones making a trip to the vacation home— a group of burglars break into the house to find a hidden safe and end up taking Shaun’s children hostage. Trapped outside the fortress, Shaun must now do whatever it takes to save her children.​

​​What will fear produce inside of you? You might say, “the will to survive,” but what if surviving means there’s a chance your loved ones won’t? For Gabrielle Union’s Shaun Russell, a “chance” is all she needs. In James McTeigue’s “Breaking In,” we’re presented with a constant choice of fight or flight, and how both primal instincts are necessary when a mother is pushed to her breaking point. It’s by no means a pitch-perfect thriller, but the first half of “Breaking In” does exactly what it’s supposed to do— it exemplifies a woman’s strength in a time where our strength is much more than physical… the other 44 minutes is a waste of alternate endings even “The Never Ending Story” wouldn’t envy.

After the passing of her estranged father, Shaun Russell (Gabrielle Union) and her two kids travel to his secluded home in preparation for its real estate sale. Upon arrival, they discover it’s not your average country abode— equipped with security cameras, bullet-proof glass, and technological home improvements, this home is a fortress meant to keep something important safe and something bad, out. What was meant as a burdened, but quick, weekend of packing and familial bonding soon becomes a fight for survival when a group of burglars invade the previously impenetrable home and kidnap Shaun’s children while she is now trapped on the outside. Shaun is left to her own devices of skill, passion, and desperation in order to save her children and come out alive.

Director James McTeigue makes sure his audiences can relate to the relationships presented in this film, and we’re given an authentic look into the experiences of a mother with her children from the beginning. The exposition in “Breaking In” is well-placed and really assists in the set-up for tension later in the film; Glover Russell (Seth Carr) and his older sister Jasmine (the electric Ajiona Alexus) have a clearly close but pained relationship, and the mother-daughter dynamic between Shaun and Jasmine is evident from the start. This is important later on; without that foundation of a hierarchy between the family, the stakes wouldn’t land and Shaun’s desperation would seem unfounded. In fact, Seth Carr’s Glover works both as an instigator and problem solver. His knowledge of the smart house’s technology and security systems is impressive, but not surprising given his generation’s growing prowess with artificial intelligence. Despite this, he’s still just a kid: there’s an endearing scene near the beginning in which he responds to his mom’s recounting of her childhood home by saying, “Sounds lonely,” followed by running off in the distance, clearly uninterested in his mom’s somber tones.

All of this said, “Breaking In” isn’t meant as a sweet family vacation story a la “National Lampoon.” It’s a thriller home invasion heist, and McTeigue makes sure you never lose sight of that, albeit, not in a good way. If you don’t know that you’re watching a thriller from the act of four creepy men invading the home, the cinematography will remind you. Full of gritty blue tones, splashes of red lighting, and harsh sideways camera angles, “Breaking In” is heavily filtered, however; its attempt to evoke campy, thrasher nostalgia falls flat due to its otherwise modern and meaty mood.

Billy Burke does his best to up the ante as the bandit team’s lead, Eddie, and he plays the confident and psychological expert the best he can given his frequently stomach-churning dialogue. His team of misfit bandits is composed of characters never quite given the opportunity to fully develop, instead relying on shallow stereotypes to fill an otherwise bland picture of villains. “Breaking In” is a good attempt at the trendy “hunted becomes hunter” genre, with some of the best scenes occurring when Shaun has the upper hand. Union gives a powerful performance as a mother forced from fear to desperation, and the will she presents to save her captive children is never once in question. She packs a wallop of ferocious feminity, so it’s a shame that the rest of “Breaking In” doesn’t quite stand up to Union’s gut-punch perseverance by the film’s end. On the contrary, it would seem that writer Ryan Engle didn’t know how to end the movie at all, choosing instead to throw in several twists in a last-ditch attempt to complete the already-failed campy thrasher theme.
Indeed, this film’s biggest issue isn’t that it has a bad ending, rather, that it can’t seem to make up its mind with which bad ending to choose. It will crush your tolerance for twists after the third or fourth one, and by the film’s 88-minute conclusion, you’ll begin to wonder if you’ll ever break out of “Breaking In.”