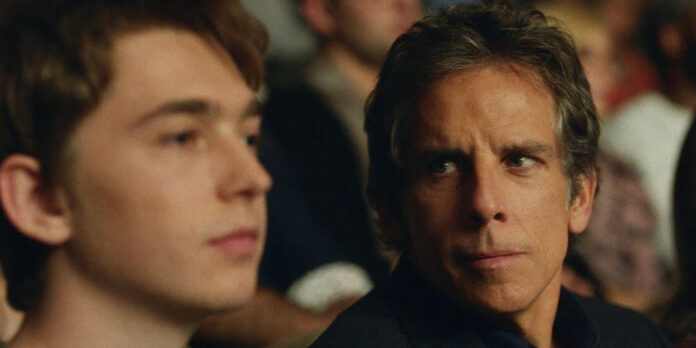 THE STORYBrad Sloan has a satisfying career and a comfortable life in suburban California, but it’s not quite what he imagined during his glory days in college. Sloan keeps comparing his life with those of his four college friends, wondering what it would be like to have their well-paying and glamorous jobs. When circumstances force Brad to reconnect with his buddies, he soon begins to question whether he has failed, or is in some ways the most successful of them all.

​I had about enough of the character of Brad as the film went through its first act. I was tired of hearing about his problems compared to his more successful college buddies who went on to make lots of money and garner fame. I was tired of hearing how he wanted success for his own son and how he might even be jealous of his son’s success. I was tired of the constant voice-over lazily telling us what we already could infer about this pathetic character. I was fed up with the day dreaming visions that Brad envisions for himself throughout the movie. Then, in the second act, the story decided to finally lay its cards all out on the table. It was the turning point for the character that I was hoping for and it redeemed “Brad’s Status” from being an absolute misguided, self-centered mess of a film.

Ben Stiller dives into “serious mode” for “Brad’s Status” as a middle-class husband and father who runs a nonprofit company and is desperately trying to build a better life for his music prodigy son (Austin Abrams) by getting him into the dream college of his choice, Harvard. However, his own life regrets and doubts plague him as he and his son travel to Boston to visit the prestigious college so that his son may get an interview and hopefully admittance to the college. Brad thinks constantly about his time in college, the friends he made (Michael Sheen, Luke Wilson & Jermaine Clement) and the successful lives they lead. He wonders where his life went that he is no longer in their social circles or looked upon as anything other than a joke in his own mind.

“Brad’s Status” is a film of self-discovery. It’s about a middle aged man who is rethinking his life decisions from the time he graduated college till now when his own son is looking to get into college. It’s very easy to dislike the character of Brad at first. He has a beautiful wife (Jenna Fischer) who loves him very much. He seems to have a decent home in the suburbs of Sacramento California. He has a son who is extraordinarily gifted at music (Despite the fact that we never see him play). And he and his family all seem to be in a good health. So what is the problem? Why is Brad so fixated on his status within society and why is he comparing himself to “friends” when they seem to have all but forgotten him? Maybe it’s an inevitable feeling we all experience at some point in our lives when our paths take different routes than our friend’s. Brad at age 47, just hasn’t decided to deal with his situation yet when most of us tend to recognize this inevitability much earlier and move on accordingly.

“Brad’s Status” has a reserved performance from Ben Stiller that is always interesting to watch but he’s stuck playing a frustrating character, one who does not realize how much of an asshole he is and then the film expects us to forgive him by the end. Despite its best intentions, “Brad’s Status” did not tell its story or express its themes well enough for me to care. I do commend Stiller for once again proving to us that he is more than the silly antic he has built his entire career off of and at this stage in his life he taking on projects that mean more to him. I look forward to more projects from him in the future and while I’m sure “Brad’s Status” will have its supporters, its story of a white privileged male who is having first world problems was one that I could not get behind.