“Bombshell’s” Road To The Oscars 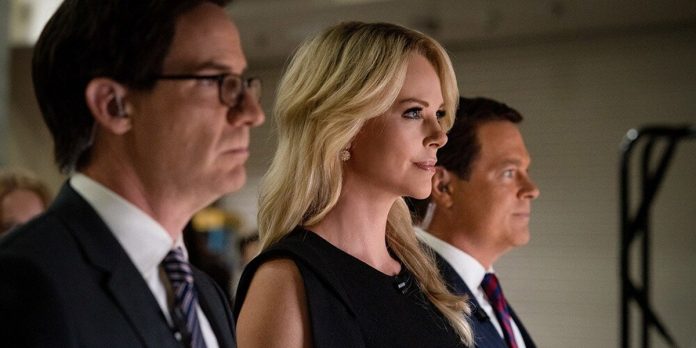 Films about women – and explicitly feminist films – are usually treated with little respect by awards bodies. A recent ugly example in recent years happened in 2014 when films like “Gone Girl” and “Wild” were washed over across the board in favor of controversial, masculine-focused stories like “American Sniper.” This was a year where there were no Best Picture nominees with women protagonists, despite there being options. Gender bias comes through all the time. Even within discourse in pundit and award show fan circles, the few films that do actually make an impact are not necessarily treated with the respect they deserve. The most successful feminist film at the Oscars in the past 20 years was “The Hours.” Yet, when Film Twitter discusses 2002, it’s almost completely skipped over in the discussion despite winning Best Actress, accumulating nine Oscar nominations, winning the Golden Globe for Best Picture – Drama, and the Best Adapted Screenplay Writer’s Guild Award. There hasn’t been a film like “The Hours” nominated since then; a movie adapted from Pulitzer Prize-winning source material that’s based on a novel by a female literary legend; and where the plot is about female protagonists struggling with depression, the internal wars of their identity, and reflection of their life choices as women.

Rather than nominating films like “The Hours,” the Academy mostly likes to reward films about women when they’re in traditional boxes. Take “Lady Bird,” for example. Though it’s a progressive film inside and out, it didn’t present unique characters never seen in cinematic stories before. Rather, it put a modern, authentic, and quirky spin on a type of story — seeing a teenage girl come of age — with which the Academy feels safe. When films about women, or performances that don’t fit into those comfortable molds, garner legitimate acclaim, the Academy recoils. Take a film like last year’s “Destroyer,” a film directed, shot, and edited by women, with a screenplay infused with feminist themes and one that breaks traditional molds of gender roles. It was deemed as too dark for Nicole Kidman to really make a splash for Best Actress. In contrast, it’s pretty astonishing that “The Favourite” did as well as it did, as a film about lesbianism and sharp gender critiques. But then again, for every “The Favourite” success, there’s an excellent, boundary-pushing film like “Widows” that fails to be recognized for its accomplishments.

It’s a widely known fact that Oscar campaigning has evolved into being increasingly ugly in the tactics deployed in order to get ahead of the competition and maintain consistency in reputation for the entire seven-month award season. The process is a long road and film companies invest an exorbitant amount of money into the process for their films to come out on top. Many associate a correlation between the rise of Twitter with the increased nastiness used in the horserace. In particular, you’ll hear “woke culture” is upending the entire process of awards season. I don’t necessarily agree with that, because, anyone who follows me on Twitter or has read my pieces, can probably surmise that I’m a pretty woke guy myself. However, there is an insidious slice of the strategies and angles taken by studios and fans as a coordinated effort to destroy goodwill for a film that is finding success.

A great heartbreak for me is how “Three Billboards Outside Ebbing, Missouri” went down in the history books. It exploded with wins at the Golden Globes, Screen Actors Guild, and BAFTA awards, sweeping the three ceremonies. As it attained such a lofty collection of trophies, there was a backlash about its blind spot on America’s sensitivity about race relations. The redemption arc Sam Rockwell’s character undergoes was the main source of criticism once the film became popular with voters. I have no intention of re-litigating Officer Jason Dixon’s redemption arc, but I do want to point out that while that thread of culture dialogue submerged, in all the goodwill for the film, justified or not, something gravely important was lost: The scandal distracted from the feminist achievement of “Three Billboards Outside Ebbing, Missouri.” There has never been a character in cinema quite like Mildred Hayes. Female characters aren’t written in the way Mildred is. Her sexuality is not the first, second, or tenth important fact about her. She’s violent, defined by anger and motivated by revenge. All of this is grounded in the tragedy of her as a mother grieving her daughter’s brutal rape and death, which is not a trite storyline in mainstream cinema. It’s still a radical idea that women can be legitimately pissed off and have the audience to challenge institutions. These are ugly emotions and attributes typically associated with masculine characters. In Mildred, there are no limitations to her identity – she’s a completely original protagonist. Her groundbreaking compilation of danger, anger, pain, comedic dialogue, and grief is something unlike anything in mainstream American cinema, let alone at the Academy Awards.

Back then, during the calculated mission of destruction, “Three Billboards Outside Ebbing, Missouri” was rarely discussed on the merits of its female protagonist. The conversation quickly went from, “Oh, this is a spitfire Martin McDonagh movie,” to being deemed “racist.” There was no justice for Mildred Hayes and what she represents. One could argue Frances McDormand’s clean sweep of the Best Actress categories throughout the season as a reward for the character, but I maintain that the accomplishments of the character weren’t discussed or acknowledged. The film’s entire narrative became a diagnosis of whether it was racist or not. And in the end, it didn’t matter what the evaluation was. The film was tainted by the mere label and association, and therefore, no one wanted to probe elsewhere into what “Three Billboards Outside Ebbing, Missouri” was saying.

​I fear this same discussion will arise with another female-driven, feminist movie: “Bombshell.” Though we’ve skirted around films that were marginally tied into a #MeToo message, there hasn’t been a movie that made it the sole subject of a major motion picture since the floodgates burst open two years ago. According to critics who have seen it, “Bombshell” is that movie and, yet, so much more. The film was put on standby for most of the summer with many questioning the potential of its quality. I knew Jay Roach could approach the political–media intersection with creativity, nuance, and grace, the same way he did with “Recount” and “Game Change.” I’ve held onto the prospects for it in all the categories that critics say are solid bets: Picture, Screenplay, Actress, Supporting Actress, Supporting Actor, Editing, Makeup/Hairstyling. Those early predictions paid off for me because the praise for the film has been across the board and consistent. The way it’s being promoted, with Charlize Theron, Nicole Kidman, and Margot Robbie promoting it together as a combined unit is the smartest strategy I have seen all year. It’s empowering given the nature of the film.

However, my fear is “Bombshell” is going to have a target on its back for backlash in a catastrophic way. As much as it is a #MeToo movie, the subject matter of the plot is about Fox News, one of the most poisonous, reviled organizations in the United States. The women in “Bombshell,” Megyn Kelly especially, have been on record making obnoxious, bigoted statements. My fear is liberals won’t even give the movie a chance before seeing it by protesting simply out of spite for Fox News and the real-life people. No matter how effective, well done, or entertaining the film is, people are going to give it grief because it’s about Roger Ailes – even if it’s a conclusive condemnation of him.

As a liberal myself, I find this to be trying. Before the film is screened for audiences, the worst-case scenario for the film would be if it tries to two-dimensionally raise the women as heroes without showing the different shades to them. It’s been confirmed by just about everyone I’ve spoken with who have seen it that the film does take aim at the different facets of who these women are. Roach presents them as complicated figures while showing the inequality and reprehensible systematic situations they fell into. For me, that middle-ground, grey area is where the magic happens; where we can examine people and characters who are deeply flawed yet show injustice in a separate portion of their life.

Despite the embargoed universal praise for the film, the online rumbling is already starting to brew. The backlash is mostly coming from white, far-left men, which is obvious to anyone who felt online gender tensions between Hillary Clinton and Bernie Sanders supporters in the 2016 primary. I know it’s going to be an unpleasant ride for “Bombshell” once the Fox News element takes over the #MeToo, women’s collective action narrative. I suspect “Bombshell” will release to great reviews, carry that buzz to all the precursors, and appear very propped up around, or just after, the Golden Globes winners are presented and the Oscar nominations are announced. It’s a “movie’s movie,” with a brand that speaks to the heart of the Academy’s old guard (see “Vice” last year). But once it becomes too large, too praised, the Internet voices will become louder and louder, until the film is written off for anything in its plot or thematic, and the only thing that is politically correct to admire about the film is the performances by the three women.

It’s such a disconcerting premonition because we get so few female-driven movies or ones with themes that are explicitly feminist. If the narrative is as striking and sharp as has been said, it’ll be a shame to ignore the layers and simply “cancel” the film because of how rotten the real-life people are. Megyn Kelly may be a controversial figure, but criticizing a film for examining the sexual harassment she and other women at Fox News endured is plainly wrong and counterproductive to women’s rights and the culture #MeToo is trying to change. People are going to ultimately overlook the fact that Roach is intentionally showing us some bad people who are in vulnerable systemic situations. (Films are made about terrible men in history and these films usually pass by without a second look.) I implore everyone to approach “Bombshell” with an open mind and willingness to understand the complexity of the film’s topics and themes.

Do you think the Academy will embrace “Bombshell?” If so, how much? Check out our latest Oscar Predictions and let us know your thoughts in the comments section below or on our Twitter account.