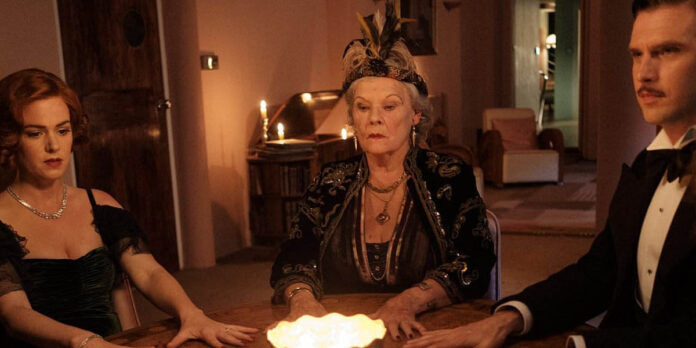 THE STORY – A spiritualist medium holds a séance for a writer suffering from writers block but accidentally summons the spirit of his deceased first wife which leads to an increasingly complex love triangle with his current wife of five years.

​​​It’s an almost impressive feat to make a decidedly unfunny adaptation of a Noel Coward play and yet, Edward Hall’s new film based on the 1941 play “Blithe Spirit” does exactly that. While the film is lovely to look at with its 1930s fashion and interior design, this comedy’s humor has either been written out or simply falls flat. But without enough profound emotion to replace it, the film ends up being rather boring by the time it reaches the hour mark.

Set in England in 1937, writer Charles Condomine (Dan Stevens) is struggling to adapt one of his novels into a screenplay for his wife’s producer father to make into a film. Meanwhile, Ruth (Isla Fisher) is frustrated both by Charles’s inability to get his screenplay written and by the lack of passion in their relationship. But when Charles has a medium (Judi Dench) perform a séance in hopes that it will provide writing inspiration, something goes wrong and brings his beloved ex-wife Elvira (Leslie Mann) back from the dead.

It’s an interesting enough premise, but unfortunately, the script by Nick Moorcroft, Meg Leonard, and Piers Ashworth messes too much with the original play without improving it. A lot of the comedy, especially the physical humor, simply doesn’t work and there’s nothing more painful than watching moments that are clearly meant to be funny but aren’t. There’s some irony to be found in watching a movie whose biggest problem is its script about a man having a difficult time writing a screenplay.

It’s become clear that Stevens’s talents are more suited to character actor roles than leading man ones in recent years. He is able to utilize that energy as Charles, downing lots of alcohol, making wide eyes at everything, and really letting loose. But he starts off the film with such high energy in his opening scene (even literally chewing on a piece of paper) that it feels like he has nowhere to go. While he’s not actively bad in the role, he can’t save the poorly written script.

Dench gives a good performance, though she feels like she’s in a completely different film. She mixes comedic moments with very vulnerable and earnest moments with a plotline around her having turned to the occult to try to reach her departed husband. Madame Arcati is a fun role that many iconic actresses have portrayed onstage; I almost wonder if Dench just finally wanted her shot at it. Fisher and Mann are bright spots as Charles’s wives, alive and dead.

“Blithe Spirit” starts promisingly enough but definitely sours by its midpoint and never recovers. I think that if it had been more camp, it might have worked better, but it would have taken some truly impressive directing and acting to salvage this script (If only these writers had a ghostly intervention to help them). You’d be better off watching David Lean’s 1945 film adaptation of the play because the new “Blithe Spirit” is undoubtedly a misfire.